A Flurry of Activity on Capitol Hill

In the months since my previous column, there have been a number of major developments in Washington affecting the interests of historians. Instead of my more traditional single-issue column, I thought it would be more useful this month to summarize these events.

Before I do, I wanted to inform you that the National Coalition for History has created both Twitter and Facebook pages that provide immediate access to news from Washington. Of course, NCH will still be posting information on our website. However, news updates will now be sent out when events warrant instead of weekly as in the past.

July is traditionally the time of year when the House and Senate get serious (I use that term loosely) about passing appropriations bills in anticipation of the end of the current fiscal year on September 30. Just before its annual August recess, Congress took action on a number of fiscal year 2014 funding bills.

Of course, as we all know, this legislative frenzy almost never results in Congress actually passing a budget by that deadline. However, both houses pass these fiscal year 2014 bills knowing that they will likely set the parameters for the ultimate budget deal that will be reached at the end of this year (or early next). As has typically been the case recently, a continuing resolution will be needed to keep the government running when the current fiscal year expires.

Once again this year the National Historical Publications and Records Commission (NHPRC) at the National Archives faced elimination in the House. However, after zeroing out NHPRC's budget at the subcommittee level, the full House Appropriations Committee approved an amendment offered by Representative David Price (D-NC) to restore $3 million in funding to the Financial Services and General Government fiscal year 2014 funding bill (H.R. 2786). This came with the full support of the Republican majority.

The Senate Appropriations Committee, in its version of the Financial Services and General Government fiscal 2014 funding bill (S. 1371), actually increased the NHPRC's funding from the current year's post-sequester reduction level of $4.75 million to $5 million. The coalition worked with the AHA and our membership groups to aggressively lobby appropriators for the higher number, and it paid off. In the past, House conferees have often acceded to the Senate number. So, optimistically, it looks as though the NHPRC will emerge with close to level funding for fiscal year 2014, which in the current budget environment is a major accomplishment.

Unfortunately, the same cannot be said for the National Endowment for the Humanities (NEH). After a lengthy debate, the House Appropriations Committee adjourned for the August recess without taking a final vote on a fiscal 2014 Interior and Environment bill. The committee intends to take it up again in September.

The bill includes a 49 percent ($71 million) cut to the NEH, down from the fiscal 2013 level of $146 million. During the markup, Representatives Nita Lowey (D-NY) and David Price (D-NC) offered an amendment that would fund the NEH at the administration's requested level of $154.4 million. The amendment was defeated on a party-line vote, with all Democrats on the panel voting in favor and all Republicans voting against.

This battle will continue into the fall, as this bill moves forward in the House and the Senate considers its own Interior and Environment spending bill. It is vital that our community demonstrate support for the NEH in Congress so the cuts are not included in a continuing resolution. And looming over the whole appropriations process is a possible government shutdown and another round of across-the-board sequester cuts should Congress fail to enact a budget.

Our colleagues at the National Humanities Alliance have prepared a grassroots alert that allows you to send a message to your senators and representative in support of NEH funding. It is important that your elected officials hear from you and your friends and colleagues. You can send a message by visiting bit.ly/16b1zwE.At the markup, there was also discussion of the bill's elimination of federal funding for the Woodrow Wilson International Center for Scholars. Representative Price offered and then withdrew an amendment to restore funding to the Wilson Center. In fiscal 2013, the Wilson Center received $11 million and the Obama administration had requested $10.5 million for fiscal 2014.

Offering the amendment allowed committee members to discuss the issue and withdrawing the amendment gave Republicans the opportunity to put the funding back into the bill at some point down the road. A recorded vote would have made it more difficult to reverse course and provide funding at a later date.

A number of committee members from both sides of the aisle spoke in favor of restoring funding to the Wilson Center. Although the Wilson Center receives "well over half" of its current budget from non-appropriated sources, according to its budget request, it leverages federal money to solicit private contributions, which will likely dry up if the federal money disappears.

Representative Mike Simpson (R-ID), chair of the Interior Appropriations Subcommittee, agreed that the organization does important work. Simpson conceded there will likely be funding added for the Wilson Center further along in the legislative process. So it appears there is a tacit agreement between the majority and minority that the Wilson Center will be funded when the bill goes to the floor or is included the inevitable fiscal 2014 continuing resolution.

An Interior and the Environment fiscal 2014 appropriations bill has not yet been introduced in the Senate. However, the scorched-earth approach towards the NEH and Woodrow Wilson Center in the House is indicative of the difficulties we face in securing humanities- and history-related funding across the board.We've provided a chart on the NCH website showing the status of funding for history, archival, education, and other programs of interest to our community and updated as new figures become available.

The House recently passed an Elementary & Secondary Education Act (ESEA) reauthorization bill (a.k.a. No Child Left Behind). The bill, HR 5, eliminates 70 existing federal programs including the Teaching American History (TAH) grants program at the Department of Education. Even though Congress has not funded TAH since fiscal 2011, the House's action goes further by revoking authorization for the program. The Senate version does not include such a provision.HR 5 passed the House by a slim margin of 221-207, with 12 Republicans joining all 195 Democrats in opposing the bill. The Obama administration has already made it clear the President would veto the bill and it has no chance of passing the Senate.

The Senate version of the ESEA bill, S. 1094, is not expected to come to the floor until sometime this fall. It would create a competitive "well-rounded education" grant fund aimed at low-income districts and would provide funding for history arts, music, civics, economics, health and physical education, foreign languages, and other subjects. However, there would be no guaranteed funding stream, and history would be competing with the other subjects for money. 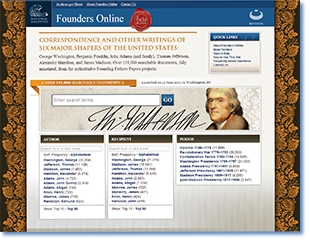 The National Archives recently launched the Founders Online website. This free online tool brings together the papers of George Washington, Benjamin Franklin, Alexander Hamilton, John Adams, Thomas Jefferson, and James Madison in a single website that gives a first-hand account of the growth of democracy and the birth of the republic.

Founders Online was created through a cooperative agreement between the NHPRC, the grant-making arm of the National Archives, and the University of Virginia Press.

The Founders Online project emerged from hearings of the Senate Committee on the Judiciary held in February 2008. Inspired by the testimony of historians such as David McCullough, Congress provided funding and directed the archivist of the United States to expedite public access to these founding documents through online publication.

Founders Online includes thousands of documents, replicating the contents of 242 volumes drawn from the published print editions. As each new print volume is completed, it will be added to this database of documents.
In addition, all of the unpublished and in-process materials (about 55,000 documents) will be posted online over the next three years. Researchers will be able to view transcribed, unpublished letters as they are being researched and annotated by the editors and staff.

Altogether, some 175,000 documents are projected to be on the Founders Online site. This website promises to be of immense value for the public's ability to understand the world and intentions of the nation's founders. It will also provide a bold economic, educational, and technical model that will provide important lessons as we plan future efforts for online publication of historical materials.

-Lee White is the executive director of the National Coalition for History.