Decline of the West or the Rise of the Rest? Data from 2010 Shows Rebalancing of Field Coverage in Departments

A study of the specializations of 16,016 historians listed in the latest AHA Directory of History Departments, Historical Organizations, and Historians shows a modest decline in the number of faculty specializing in European and U.S. history, as their numbers fell relative to other fields and in the number of recent PhDs employed to teach those subjects.

When compared to the faculty listings in 2005, there is a 3.1 percent drop in the proportion of historians specializing in European history, and a 3.8 percent decline in the percentage focusing on the U.S.1 When the faculty is broken into generational cohorts, the declines among recent PhD recipients appear even more pronounced.

These declines occurred as the proportion of specialists in other geographic areas—particularly in the history of the Middle East and the world as a whole—grew significantly over the past decade, and also as the number of faculty employed in history departments increased modestly. The interpretation of these numbers is complicated by the bifurcated nature of the past five years—as the first three years after 2005 saw exceptional growth in hiring (reaching historic highs in 2008), just before the floor fell out of the job market. It is hard to say whether these numbers reflect a new equilibrium, or a transitional phase for the discipline.

Trends in Faculty Covering the World

Every five years AHA staff break down the Directory listings, tabulating the geographic and topical field specializations of faculty as assigned by their departments. This allows us to track general trends in the interests of historians employed in academia.
The most striking change to be found in the numbers for 2010 is evidence of a decline in the representation of historians in the broad fields of European and U.S. history. From 2005 to 2010, the proportion of faculty listed as teaching European history fell from 33.7 to 32.7 percent, while U.S. history specialists declined from 42.6 to 41.0 percent.

The shifts in these proportions may appear quite modest, but the Directory tends to be a lagging indicator due to the relatively slow movement of faculty into and out of academia. Looking more closely at the representation of subject fields among faculty who recently received the PhD indicates a more substantial decline in these two fields. 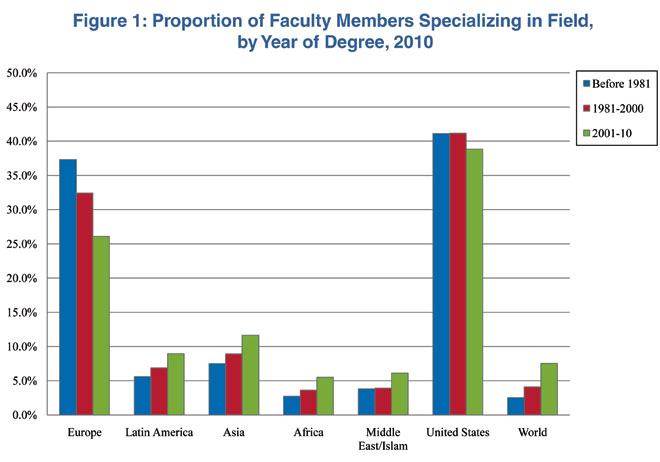 The decline among faculty hired over the past decade tracks with a general decline in the proportion of students receiving doctorates in European history over the same span. According to the federal government's Survey of Earned Doctorates, 21.6 percent of the PhDs earned in history from 2001 to 2009 went to Europeanists. Because the federal survey uses different criteria of classification, the figures may not correspond directly to the data in the faculty listings. Nevertheless, it indicates that even with the decline, specialists in European history found a slightly higher proportion of academic jobs over the past decade than their representation among new degree recipients.2

Unlike European history, this runs against the trend among recent PhD recipients, where the proportion of U.S. history specialists has been trending slightly higher over the past 20 years. An average of 41.1 percent of the history PhDs conferred from 2001 to 2009 went to specialists in U.S. history.

The decline in the two fields can be attributed to a number of causes. The primary cause for change is an effort by many departments over the past decade to expand departmental strengths in fields other than U.S. and European history. But U.S. and European history also suffered disproportionately from recent hiring freezes. As a result of many decades in which departments hired relatively few specialists in the history of other regions, the fields of European and U.S. history had many more historians on the verge of leaving their departments when the job market turned sour in 2008. As they left and (in many cases) were not replaced, it makes sense that those two fields would be the first to show the recent contraction in hiring.

Other fields, too, experienced a similar decline in the proportion of faculty listed in the latest Directory, most notably, African history. Between 2005 and 2010, the proportion of Africanists fell from 4.1 to 3.8 percent. But when set against job listings in the field over the past decade, which were the highest on record, the decline in the number of positions occupied seems anomalous. Whether the positions went unfilled, or were actually for departments that do not list in the Directory (such as African Studies), could not be ascertained from current data.

In comparison, the proportion of faculty in the other broad geographic fields tracked by this study either held steady or increased over the past five years. The percentage of Asian history specialists was essentially unchanged at 8.9 percent, while the proportion of Latin Americanists increased slightly from 6.4 to 6.8 percent. Middle East specialists increased from 3.9 to 4.4 percent, and world historians grew from 3.6 to 4.5 percent.

When categorized by the time period in which the faculty members earned their degrees, every field outside of European and U.S. history had a larger representation among faculty hired in the past decade. Among historians who earned their PhDs before 1981, only 5.6 percent specialized in Asian history, while 11.7 percent of the faculty who earned their PhDs in the past decade specialized in the field. The same general trend holds true in Latin American, African, and Middle Eastern history, where the representation among the most recent cohort of PhDs is at least 70 percent higher.

Geographic Coverage in the Departments

Much of the growth in fields outside of the U.S. and Europe seemed to occur due to the efforts of many smaller departments to expand their coverage to additional regions of the world. 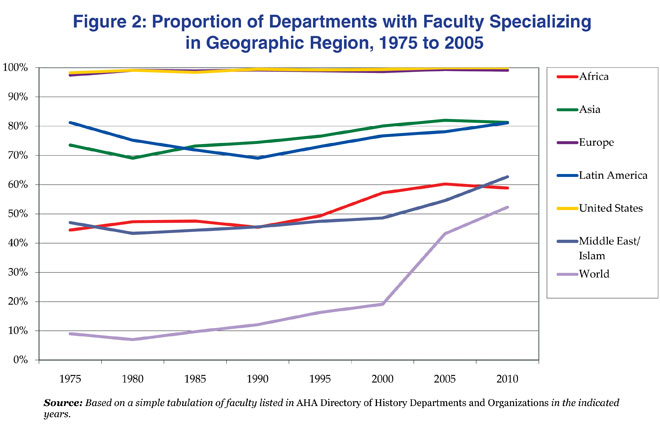 Over the past 35 years, U.S. and European history have been represented by at least one faculty member in every history department (though it must be noted that European history is not explicitly cited in a few of the specialized departments in the Directory). That trend remains unchanged in 2010.

A Reversal of Topical Specializations

Among the topical field specializations, historians teaching the field of women and gender history now comprise the largest group in the Directory—accounting for 9.0 percent of the listed faculty (up slightly from 8.9 percent). The topic has now surpassed social history, which fell from 9.0 percent in 2005 to 8.3 percent in 2010 (Figure 3). 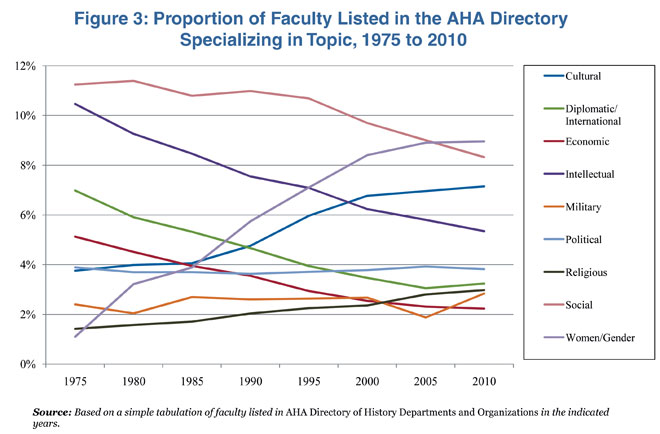 The proportion of cultural historians increased slightly between 2005 and 2010, and now stands at 7.1 percent. There was also a modest uptick in the number of self-identified military historians, from 1.9 to 2.8 percent of the faculty listed.

Three fields of history experienced increases of 6 percent or more—diplomatic and international relations, religion, and military. After a rather precipitous drop between 2000 and 2005, military history experienced a substantial rebound, increasing from 1.9 to 2.8 percent of the listed faculty. Diplomatic history increased from 3.1 to 3.2 percent, and the history of religion grew from 2.8 to 3.0 percent.

The changes in distribution of specialists among the departments generally tracked with the trends in their representation among the larger faculty. Specialists in the history of women and gender, for instance, are now found at 81.7 percent of the departments (up slightly from 79.6 percent), while only 67.6 percent of history department now list a social historian (down from 71.6 percent in 2005).

The largest movement was in the history of religion, which is now represented at 41.9 percent of the departments. That is up from 31.3 percent a decade ago, and just 24.4 percent of departments in 1990.

When the representation of field specializations is broken down into generational cohorts, the results indicate a general decrease in the selection of topical categories. Only three topical fields (African American history, military history, and the history of religion) show an increase among recent PhDs. All of the other fields had smaller representations among the faculty who earned their PhDs from 2001 to 2010.

For all the talk of change, the evidence from the Directory is of a discipline that is expanding to treat wider areas of the world, but which still tends to describe its members in much the same way it did 35 years ago.

1. Primary data for this report comes from information gathered in summer 2010 for the Directory of History Departments, Historical Organizations, and Historians. This is compared to data gathered in the Data scanned in for editions of the Guide/Directory prepared in the summers of 1975, 1980, 1985, 1990, 1995, 2000, and 2005. AHA staff tabulate field specializations for faculty members at history departments in the United States using the text provided as part of the annual listing. Faculty members are assigned to each category to which they are attributed, as a result, one faculty member can be tabulated in more than one geographic or topical field.

2. Estimate of field specializations among PhDs conferred in the annual Survey of Earned Doctorates. See Robert B. Townsend, "New History PhDs in 2009 Surged to Second-Highest Level in 32 Years," Perspectives on History (March 2011).