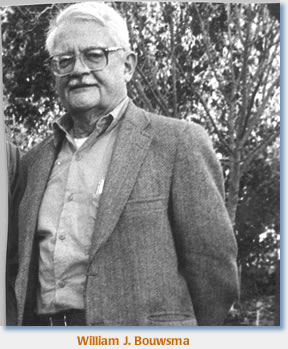 William J. Bouwsma, Sather Professor of History Emeritus at the University of California at Berkeley, and past president of the AHA (1978), died in Berkeley on March 2, 2004. He was 80.

Bouwsma's scholarship focused on the history of European culture in the early modern period. His first book (1957) was a study of Guillaume Postel, a French intellectual of the late 16th century. In 1968 he published Venice and the Defense of Republican Liberty: Renaissance Values in the Age of the Counter-Reformation. His initial interest in the career of a Venetian cleric, Paolo Sarpi (1552–1623), expanded into an analysis of Venetian politics and its social and cultural context, and beyond that, to a consideration of the issues raised by the confrontation between a Renaissance republic and the Counter-Reformation papacy. In 1988, he published a portrait of John Calvin, a major contribution to the scholarship on that prominent Reformation figure. In 1990 the University of California Press issued a collection of Bouwsma's essays: A Usable Past: Essays in European Cultural History. His last book, The Waning of the Renaissance (1550–1640), was published in 2000. This magisterial work surveys the history of European culture, from its heady origins in the 14th century, through a period of maturity, followed by a reaction and rejection of its basic values.

Commenting on Bouwsma's scholarship, his Berkeley colleague, Randolph Starn, noted that "his way of thinking about history is grounded rather as a battle is grounded, and the struggle between rival conceptions of the world has remained his constant theme and a source of countless variations." Thomas Brady, who was Bouwsma's replacement in Reformation studies at Berkeley after his retirement, wrote that "since the early 1960s, Bouwsma's writings became widely influential among scholars and graduate students in the general area of Renaissance studies. He explored the relationships between humanist cultural values and public life in the Renaissance, and in his later work meditated on why the ideals of that age seem to be growing less attractive to our own." A longtime friend and colleague, Henry May, offered this assessment of Bouwsma's work: "His historical thought was powerful, complex and profound. It was quarried, sometimes painfully, from sources that lay deep in his personality and experience." Bouwsma's former colleague Natalie Zemon Davis wrote that "my own memories are of Bill in all of his magnificence: wise, deep, humorous, questioning, searching, original.... He was a model for us in life and his difficult end only strengthens the wonder of all he did for us."

Bouwsma devoted as much time and energy to teaching as to his research. He taught students at every level, from survey courses on Western civilization to graduate seminars on topics in European cultural history. When he returned to Berkeley in 1971, he developed a new lecture course on the history of Christianity, which attracted literally thousands of Berkeley students, and which has become a standard offering in the departmental curriculum. He was the recipient of Fulbright, Guggenheim, and National Humanities Center fellowships. He was elected a fellow of the American Academy of Arts of Sciences (1971) and of the American Philosophical Society (1981). In 1992 he received the Nancy Lyman Roelker Mentorship Award from the AHA.

He is survived by Beverly, his wife of 60 years; by four children (John and Sarah of Portland, Oregon, and Phillip of Guerneville and Paul of Santa Cruz, California); and by six grandchildren.