The number of students receiving bachelor’s degrees in history reached the highest level in almost 35 years in 2006–07, even as the number of new history PhDs conferred fell to its lowest level in more than 10 years.

According to the U.S. Department of Education, 34,446 bachelor’s degrees were conferred that year—3.9 percent more than in the previous calendar year, and the largest number awarded since 1973–74. In comparison, the total number of undergraduate degrees conferred by American colleges and universities increased by just 2.6 percent.
This marks the fifth consecutive year that the number of new history degrees grew faster than the rest of academia. As a result, history now accounts for 2.26 percent of all new undergraduate degrees conferred—up from a lowly 2.01 percent in 2001–02, but still well below the discipline’s glory days of the late 1960s and early 1970s, when history accounted for more than 5 percent of the degrees conferred (Figure 1). 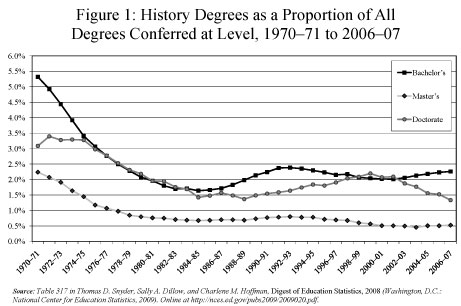 At the master’s level, the number of new history degrees increased by 5.1 percent, from 2,992 to 3,144. This was in contrast to a much more modest increase of 1.8 percent among all fields. Still, relative to other fields, very few history master’s degrees are conferred—amounting to barely one-half of one percent of all MA degrees.

This decline offers some positive news, however, given the continued disparities between new history PhDs and academic jobs in many fields of history, and signs of an imminent decline in the number of new jobs, as reported in the January 2009 issue of Perspectives on History. 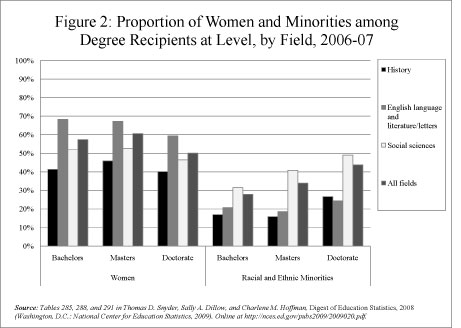