Even before the current economic situation affected the job market, salary growth for historians lagged behind the rest of academia. While average academic salaries grew 3.84 percent in 2008–09, the average salary for historians increased only by 3.0 percent (Table 1). 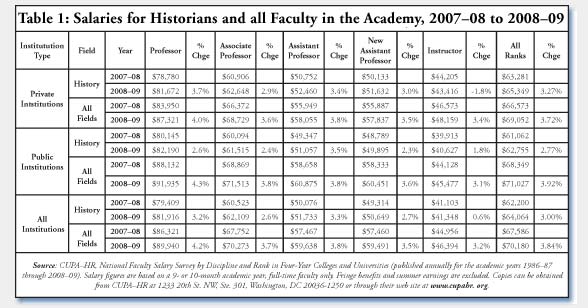 The salary gap looks modestly better at the higher ranks. Full professors in history earned 6.5 percent less at private institutions (an average of $81,672 compared to $87,321) and 10.6 percent less at public colleges and universities ($82,190 compared to $91,935). But the differences among the ranks portend a troubling future for salaries in the discipline.

As history has become more closely aligned with the humanities (which have the lowest average salaries in academia), and suffered through an extended series of job crises since 1993, average salaries have fallen well below the average in academia. The new CUPA–HR survey singles out history among the six lowest-salaried disciplines in academia at all four ranks—setting history alongside faculty in English language and literatures and the visual and performing arts.

The growing gap for new assistant professors portends long-term problems in the salary structure for the discipline, as the poorly paid assistant professors of today are likely to become underpaid full professors a decade from now, as they move up through the ranks and the salary gaps become normalized. Given the current economic crisis and the surfeit of PhDs in the academic job market, there seems little hope of immediate improvement.

Demographic Trends in the Academia

In addition to providing vital data on salary trends, the CUPA–HR reports also allow us to track trends in the shape of the history faculty and hiring in the discipline.

Even before the recent round of cutbacks and hiring freezes, the new report shows that there was a modest 1.2 percent decline in the number of new assistant professors hired for the 2008–09 academic year. But that small decline masks significant differences between public and private colleges and universities. At public institutions, the number of surveyed schools hiring new assistant professors fell 3.5 percent, while at private colleges and universities (which do significantly less hiring) reported a 3.5 percent increase.

The proportion of institutions actually doing hiring changed more dramatically—rising 11.5 percent at private colleges and universities (from 22.9 percent to 25.5 percent), while falling 9.3 percent at public schools (from 46.7 to 42.4 percent) (Figure 2). 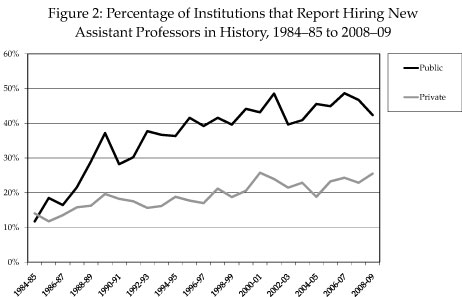 The surveyed institutions do not constitute the full universe of four-year colleges and universities actually hiring, but they have consistently provided a good barometer of hiring trends. Needless to say, given the sharp drop in the number of job advertisements and reports of additional hiring freezes, we will be awaiting next year’s report with great concern.

Twenty years ago history departments were very top heavy with full professors—so much so that the CUPA analysts singled out history for the large proportion of the department faculty at that rank. But within the past 10 years the departments have become more evenly balanced between the three professorial ranks (Figure 3). 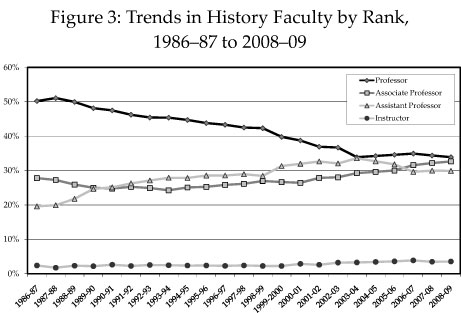 1. Salary figures are based on a nine- or ten-month academic year, for full-time faculty only. Fringe benefits and summer earnings are excluded. CUPA–HR, National Faculty Salary Survey by Discipline and Rank in Four-Year Colleges and Universities for the 2008–09 Academic Year (Washington, D.C.: CUPA–HR, 2009). Copies can be obtained from CUPA–HR at 1233 20th St. NW, Ste. 301, Washington, DC 20036-1250 or through its web site at www.cupahr.org.