In 2005, David Foster Wallace told the graduating class of Kenyon College a joke:

For Wallace, “the immediate point of the story” was that “the most obvious, ubiquitous, important realities are often the ones that are the hardest to see and talk about.” In my classroom, the parable guides the way I use primary sources. Take newspapers, for example. Students usually come to history courses familiar with the role of newspapers as evidentiary sources. In previous classes, they may have read article excerpts or seen political cartoons depicting famous events. While interacting with and analyzing these types of primary sources is important in a history course, too often we, as instructors, present material from newspapers in excerpts shorn of the context in which they appeared. This has the unintended effect of flattening the past, reducing the complexity of the people and times under study, and robbing our students of the opportunity to grasp the richness of the day-to-day lived experience of the past. To return to Wallace’s joke, students learn about the sharks, whales, and shipwrecks of the past, but learn little about the ocean these historical figures swam in. 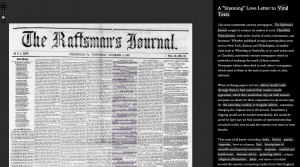 “Love Letter” is an interactive exhibit of the front page of the November 4, 1868, edition of the Raftsman Journal on Viral Texts.

For example, on April 13, 1861, the Cleveland Morning Leader announced the start of the Civil War alongside a list of commodity prices, a police blotter, and an advertisement for “Vegetable Life Medicines” that had apparently “triumphed over Disease in almost all of its diversified forms.” On the eve of the nation’s greatest conflict, farmers bought grain, drunks caused trouble, and drug companies peddled their wares. If we want our students to gain a fuller understanding of the histories we study that goes beyond a list of names, dates, and places, shouldn’t we better humanize the past and contextualize the sources we depend on?

Using digital projects like Viral Texts has allowed me to accomplish three important pedagogical goals related to my attempt to contextualize the past.

So what exactly is Viral Texts? With a self-conscious title, Viral Texts is an innovative digital project that traces how and why articles, poems, recipes, and short stories went “viral” in the 19th century through distribution networks between newspaper publishers across the country. It shows how Americans read the same texts in their local newspapers as in newspapers from across the country. Viral Texts, like other digital projects examining American newspapers, draws heavily on the National Digital Newspaper Program. A partnership of the Library of Congress and the National Endowment for the Humanities, the National Digital Newspaper Program has digitized more than 150,000 newspapers from 1690 to the present, with a particular focus from 1789–1924. Teachers and students can browse these digitized papers via the Chronicling America website. World history instructors can find a list of digitization efforts for newspapers from more than 70 countries through the Center for Research Library’s ICON project.

Before showing my students an example from Viral Texts, we look at a piece of contemporary media, either a printout of the front page of BuzzFeed, a sample Twitter stream, or Snapchat’s “Stories.” I ask the students to tell me what types of “articles” they see, whether they are related to politics, entertainment, religion, technology, or science. We categorize them by topic and tally the results. Next, we go to Viral Text’s wonderful “Love Letter.” An interactive exhibit of the front page of the November 4, 1868, edition of the Raftsman Journal, “Love Letter” contains a short story, a listicle, jokes, an advertisement for Hoofland’s German Bitters, moral advice, and a “stranger than fiction” short story. We compare it to our contemporary source and discuss the similarities between the two. While the content differs, the tone and topic are often the same. I emphasize that like the splash page of BuzzFeed, the Raftsman’s first page contains little of what we would consider as traditional “news.” Even when we “scroll” to the second page to see local and national political news, it is still interspersed with advertisements, short vignettes, and witticisms.

Next, I isolate the fifth column of both pages and discuss it with the class, treating it as a social media “feed.” The column contains, in order, the “Love Letter” of the exhibit, a piece of parenting advice, a politically charged “meme” of sorts, a brief mention of murder, politics, a court case, Reconstruction news, a joke, and a celebrity sighting. Through this activity students see that the events we discuss in our lectures and textbooks were only a part of the lived reality of our historical actors (pedagogical goal 1). They also gain a greater understanding of the commonalities between media diets of the past and present (pedagogical goal 2). In addition, the “Love Letter” exhibit explains how and why certain articles went “viral.” The parenting advice piece, for example, was reprinted in more than 50 different newspapers around the country over the course of 30 years. In fact, you can find it in a 1911 edition of the Sacramento Union. It’s even possible that a form of this advice is circulating now on a parenting blog somewhere. Students shouldn’t be, but often are, surprised to learn that anxiety over parenting spans many generations of Americans.

Eventually, we look at a few more of the most “viral” articles and I ask students what they can tell us about the people that we’re studying (pedagogical goal 3). Why are the most popular articles recipes, religious proscriptions, meditations on morality, parenting advice, and, my personal favorite, a publisher’s lament on the difficulties of pleasing newspaper readers that appeared in more than 130 newspapers nationwide? Perhaps, I tell my students, that while people in the past may very well been concerned with the events we study, they all too often had more human concerns that caught their eye.

Included with this review are two assignments. The first compares a current newspaper or media source with a 19th-century counterpart. The second asks students to engage with the Viral Texts database. Students choose an article, chart its “virality” on a blank map and use material learned in class to reflect on the reasons they think the article resonated with Americans of the time.