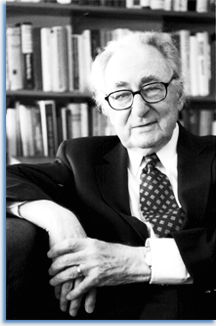 Historian of the British Labour Party, Editor of the American Historical Review, and AHA Life Member

Henry R. Winkler, historian, editor of the American Historical Review (AHR), university administrator, and president of the University of Cincinnati, died in a Cincinnati hospice on December 26, 2012. Born in Waterbury, Connecticut, on October 27, 1916, he was the eldest of six children of immigrant parents. His professional life evolved in two public universities, each of which he eventually headed.

He won a college tuition scholarship at his high school graduation, but could not accept it because the family could not provide his personal expenses. He was adopted by an aunt and her husband and lived with them in Cincinnati so he could attend the then-municipal University of Cincinnati, whose costs for residents were minimal. Beginning in 1933, he completed two years of study, withdrew for a year to help his family with earnings from work in restaurants and a clock factory, and returned to graduate in 1938 with a BA in history and election to Phi Beta Kappa. He worked for wages throughout his undergraduate years for both private employers and the National Youth Administration. He still managed to earn letters in track, excelling in the quarter-mile. His MA work at Cincinnati (1940) was financed by a fellowship in the first year and an appointment as instructor in the second. In 1940, before he began doctoral study at the University of Chicago, he married a classmate, Clare Sapadin.

Awarded two annual fellowships at Chicago, Winkler's education was again interrupted when he served a year as an Office of War Information analyst. Commissioned a naval officer in a secret program to produce Japanese linguists in 1943, Winkler absorbed 18 months of rigorous language training in Boulder, Colorado, and was shipped to the Southwest Pacific as an intelligence officer. At war's end he was in the Philippines; transferred to Japan, he was assigned to the Strategic Bombing Survey. Mustered out as a lieutenant (jg) in 1946, he returned to Chicago, rejoined his wife, met his son, Alan (b. 1945), and resumed doctoral studies. He completed his dissertation on support for the League of Nations in Britain while an assistant professor at Roosevelt University. Degree in hand, he joined Rutgers as an assistant professor in 1947, beginning a 30-year association with that institution.

In time he developed into a master teacher; his annual lecture on Nazi Germany drew large numbers of nonenrolled auditors. Concerned about teaching materials, Winkler created a pioneering textbook, Great Problems in European Civilization (1954), with the Princeton medievalist Kenneth M. Setton. In 1952, he published The League of Nations Movement in Great Britain, 1914–1919, and became an associate professor.

A Fulbright professorship that took Winkler and family, including a daughter, Karen (b. 1948), to the London School of Economics deepened his understanding of the British Labour Party through archival research and meetings with scholars and politicians. In the following decades, a steady flow of articles, essays, conference papers, and book reviews helped establish him as a leading authority on the history of the Labour Party and the historiography of modern Britain. Promotion to professor came in 1958, the chair of the Rutgers College history department two years later.

Something of Winkler's reputation may be seen in the manner of his induction into the profession's hierarchy. As Winkler, a lifelong advocate of orderly due process, wryly described it, he was approached by some of the elder males who dominated the American Historical Association and told that they needed to appoint an executive secretary and an AHR editor and that he could have either position. Winkler accepted the editorship. He continued at Rutgers, and during most weeks would take an early train to Washington, work two days in the journal's office, returning to Rutgers on the second evening. The issues from January 1965 to June 1968 were his responsibility.

By then Winkler was very much a public man, serving on "Commissions, Committees, etc." largely involving scholarship, athletics, and the nature of the modern university. His service on a local school board included a term as president, and he was one of the small detachment of historians who joined the historic march from Selma for its final day, March 25, 1965, in Montgomery, Alabama.

The University of Cincinnati, about to undergo a complex transition from a municipal to a state institution, created the position of executive vice president for Winkler early in 1977. As the time for transition arrived, the president resigned and Winkler, for the second time, became an acting president. After almost six hectic months, Winkler became president in his own right.

The major achievement of his seven presidential years was ushering in an era of relative prosperity at Cincinnati, bolstered by its new status as a state university. As Winkler put it in 1982, "I took the university when it was in turmoil, and I think I've brought it a substantial degree of stability." Faculty and students in those years witnessed an old-fashioned president who taught classes, attended lectures, and even did scholarly research. Two brief strikes by a newly unionized faculty were each settled in days without reprisals. Those of us who came to know Winkler were warmed by his friendship.

In retirement he consolidated his work in British history with two monographs: Paths Not Taken: British Labour and International Policy in the 1920s (1994) and British Labour Seeks a Foreign Policy, 1900–1940 (2004). He long continued to be active in university and public affairs, playing a leading role in establishing the Henry R. Winkler Center for the History of the Health Professions, an archive for the various medical historical materials in possession of the university, including the large collection of the polio pioneer Albert Sabin. He is survived by his wife, five children, six grandchildren, and six great-grandchildren.