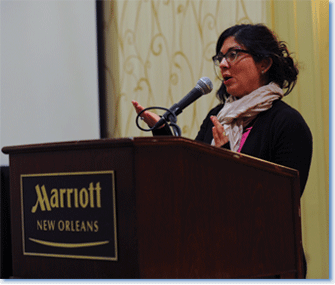 In December 2012, the Andrew W. Mellon Foundation awarded grants to the American Historical Association and the Modern Language Association to support efforts to broaden the career horizons of humanities PhDs. As part of this grant, research is underway to track 2,500 history PhDs who received their degrees between 1998 and 2009, and the AHA has begun discussions with some of the constituencies who can help to outline the current landscape for doctoral students embarking on non-professorial careers.

At its 2013 annual meeting in New Orleans, the AHA hosted the initial conversations about the project. Dozens of participants, including directors of graduate studies programs, university administrators, and contingent faculty members, met with AHA past president Anthony Grafton, senior project advisor Robert Weisbuch, and project director Julia Brookins. They discussed the implications of what we already know—and do not know—about the careers of history doctorates who are not postsecondary teachers.

Administrators from a range of universities focused on disciplinary definitions of "placement." They described how placement statistics currently encourage history departments to discount or ignore PhD alumni embarking on careers outside the professoriate, however illustrious their paths might be. Administrators also shared examples of alternative approaches to placement in disciplines like chemistry and engineering. Participants also suggested that the AHA could lead the redefinition of a successful job placement for newly minted PhDs. They also discussed ways that they and their colleagues in administration could help to make placement incentives reflect more fully what historians value about their training and abilities.

At a breakfast for AHA members who work as adjunct or part-time faculty, which included several prominent public historians, attendees began by describing their own career experiences. They suggested ways that the AHA and doctoral programs might strengthen students' portfolios of skills and encourage career exploration before people encounter the academic job market. Attendees thought that an AHA mentorship program that matched students to alumni working in nonprofessorial jobs might be useful. The core task of a project like this one, several participants agreed, is for the AHA to lead historians in a sharply focused consideration of the role of historians and historical work in society. What do historians do better than anyone else? The range of answers to this question will suggest different ways that graduate training can be enriched to help fill a range of public roles.

At later meeting, Anthony Grafton facilitated a wide-ranging discussion among directors of graduate studies from 25 history PhD programs. They suggested that one of the obstacles to cultural change within their programs was their sense that entering students do not want to spend time early in the doctoral curriculum—when it might be most beneficial—learning about nonprofessorial careers. Directors of graduate studies discussed the idea that departments could take a more intentional approach to internships and work-study. Such an approach would emphasize the experiential dimension of graduate training and give students valuable work experience in the myriad operations of university administration itself. There was broad agreement that it would be helpful for the AHA to establish a taxonomy (academic, government, museum, private-sector, etc.) to classify the career outcomes of history doctorates and for the AHA to encourage every PhD-granting program to provide more and better placement data to prospective graduate students.

Graduate students were also included in the conversation. At the graduate student open forum, Laura Isabel Serna of the AHA's Graduate and Early Career Committee (GECC) led the discussion of careers. AHA Deputy Director Robert Townsend gave a very brief presentation about demand trends for full-time history faculty since the 2008 economic collapse. Anthony Grafton; Jacqueline Jones, vice president, Professional Division; and Executive Director James Grossman all participated in the conversation with students. Debate among students focused on whether or not students already know all they need to know about careers outside the professoriate and are uninterested in such paths, and hence whether enhanced curricular breadth was necessarily or desirable. Despite the long odds of the academic job market, it is clear that many graduate students enter with a "lottery mentality": someone has to land that plum job at a four-year research university, and it might as well be me. Given those odds, however, participants suggested it would be useful for the AHA to start providing better information to students about careers at two-year colleges.

Jacqueline Jones noted that students will change their minds about careers over the course of the doctorate. She suggested that departments should be looking for ways to build flexibility into the training, in spite of students' early optimism. Students noted that part of the problem in considering greater breadth of opportunity was that even if they did seek a wider range of skills, they had trouble finding advice. The AHA could help by providing more opportunities for graduate students to hear from and network with history alumni who work outside the academy. Attendees welcomed the idea of an interviewing workshop in 2015 that would include historians working in a range of jobs beyond the college classroom.

Additional meetings are scheduled this winter and will focus the conversation in the coming months on engaging with employers and history doctorates outside the professoriate. There was substantial overlap in views expressed among the different groups in thus far, which bodes well for significant consensus and progress as the project moves ahead.