The Face of the Nation: George Washington, Art, and America 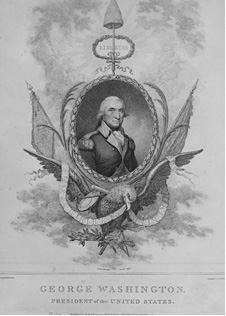 This print was designed by John James Barralet after a miniature of Washington by Walter Robertson, then engraved by Robert Field. In addition to the eagle, other patriotic symbols populate this print. In her talk, Wendy Wick Reaves pointed out how this eagle carries “a baton, the scales of Justice, and an ‘E Pluribus Unum’ ribbon.” Other emblems include “military banners, the palm branches of victory, the liberty cap on a sword, [and] the word ‘libertas’ in a laurel wreath,” which “aim upwards towards the encircling clouds.” Reaves noted that such symbols would have been universally understood in the 18th century; thus, their use in prints would have been an effective mode of communicating political messages to a wide audience.

Historian Hugh Howard kicked off the Friday evening sessions by tracing the story of America’s budding art scene in the portraits of George Washington. Over the course of Washington’s career, portraiture in America developed from an amateur’s field to an established art form and profession; many of the period’s major portraitists painted the famous general. Among the most prominent of these were Charles Willson Peale, Edward Savage, Gilbert Stuart, and John Trumbull, all of whom studied in London under the older American painter Benjamin West. Washington sat for Peale seven times in the course of his life, and the symposium dramatized the relationship between painter and sitter in a fictional theatrical dialogue between Washington and Peale (portrayed by historical reenactors Dean Malissa and Bob Gleason, respectively). This dialogue featured the two men reminiscing about events that occurred in their lives at the time of each sitting, and suggested that Peale, as well as Washington, may have approached the portrayal of the general from an altered perspective each time. Indeed, each of Peale’s portraits shows a very different Washington—a result of the changing man and the developing artist.

Gilbert Stuart was a similarly important portraitist of Washington; according to Ellen Miles of the National Portrait Gallery, Stuart made it his mission as a young artist to paint Washington. Stuart would produce several famous portraits, including the unfinished Athenaeum portrait, begun in 1796. Contrary to the custom of the sitter’s purchasing the original, Washington allowed Stuart to keep the original of this portrait so that the artist could use it to paint replicas. Stuart took full advantage of this privilege, eventually producing 75 replicas,1 one of the latest of which was painted in 1820. Miles noted that later in life Stuart never painted Washington the same way: “Each one is different . . . so freshly painted,” Miles marveled. The Athenaeum face would be taken up by various copyists, ultimately finding its way onto the one-dollar bill. Stuart himself would appropriate this face for another famous work of his: the full-length Lansdowne portrait, which shows the exact same head but with the eyes turned. In this portrait the general stands in a drawing room, a document on the table next to him, with storm clouds and a rainbow showing through a window in the background. Stuart painted this portrait only two years after the signing of the Jay Treaty, which Washington supported; perhaps the rainbow signified the promise of peace the treaty might bring amid tenuous US–British relations and the French Revolution. 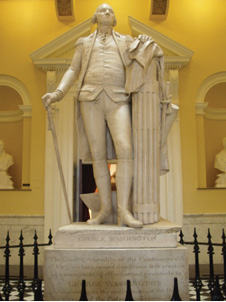 Jean-Antoine Houdon’s George Washington was commissioned in 1794 by the Virginia General Assembly and completed in 1796.Thomas Jefferson corresponded with Houdon, occasionally consulting Washington on matters concerning the sculpture’s design. Washington requested that he be dressed in contemporary clothing, not ancient Roman garb, as was traditional with such statues. Many of the classical features in this work were likely the result of Jefferson’s involvement. The original is housed in the Virginia State Capitol.

It was not just portrait artists who took Washington’s image and repurposed it. New technologies brought new reproduction possibilities. Wendy Wick Reaves of the Smithsonian National Portrait Gallery vividly demonstrated how Washington’s image became popularized via the print medium, swiftly adorning the pages of “books, magazines, almanacs, broadsides, children’s primers, and song sheets.” The visually reproduced Washington became an indicator not so much of the man himself but of the cultures that consumed him, and the contexts in which he appeared in these reproductions indicated the ideological purposes he was meant to serve. According to Reaves, allegorical figures populating 19th-century prints of Washington quickly communicated such purposes to audiences; figures such as the “Genius of Liberty,” Fame, Nature, and Justice reassured the public that Washington promised prosperity for the young nation. Patriotic symbols also frequented these works. One 1795 print by John James Barralet (see the previous page) depicts a portrait of the general on the back of a majestic eagle against the backdrop of “a radiating sun and clouds.” This deific representation of Washington came at a time during his second term when events such as the Whiskey Rebellion and the signing of Jay’s Treaty had weakened the public’s support of his administration; the depiction was meant to inspire people’s shaken confidence in their president.

The variability found in the painted portrayals of Washington is mirrored in the sculptures that were made of him. Two striking examples were the subject of University of Virginia professor Maurie McInnis’s talk: Jean Antoine Houdon’s marble statue George Washington (1789) and the bronze Virginia Washington Monument by Thomas Crawford (1858–69), both located in Richmond. The Houdon features a Neoclassical-style Washington standing in civilian dress with a plow and sheathed sword; this depiction drew on the comparison often made between Washington and the Roman statesman Cincinnatus after Washington retired from public service following the Revolution. This Washington could lead an army into battle but longed for the peace and tranquility of domestic life. Conversely, the Virginia Washington Monument features a bronze equestrian statue of Washington riding triumphantly to war. In sharp contrast to Houdon’s Cincinnatus-inspired Washington, Crawford’s equestrian design associated Washington with the Roman emperor Marcus Aurelius, well known for his military prowess. The Confederacy selected this statue as the subject of its seal: a show of strength to the hostile North. McInnis remarked that “statues tell us more about the men who chose them than about Washington himself”; as with painting and prints, a multitude of sculpted Washingtons served a variety of political and sociocultural purposes.

Following Hugh Howard’s presentation on portraits at the beginning of the conference, an audience member asked if George or Martha Washington had indicated which portrait was the most accurate. Howard replied that they had not, and then he suggested finding the portrait that “speaks to you the most” and imagining that likeness as the real Washington. Scholars at the symposium demonstrated how early Americans did just that in their portraits, prints, sculpture, and even 18th-century silk embroideries of American schoolgirls (the subject of a talk by Mount Vernon’s senior curator, Susan P. Schoelwer). University of Maryland professor Scott Casper gave the final lecture (on 20th-century appropriations), concluding, “It is through this reimagination that George Washington remains for us a fresh and vibrant figure.” Indeed, this statement encapsulates the spirit of the symposium overall. 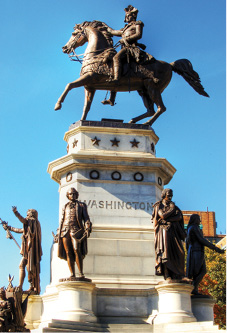 Thomas Crawford cast the bronze statue of Washington with the intention of portraying him as “the great Virginian.” The statue was completed in 1858; the base was not finished until 10 years later. The monument is located outside the Virginia State Capitol in Capitol Square.

Just as Washington became a symbol of the values Americans chose to ascribe to him at their given historical moments, I would like to appropriate him for another purpose. By the time I arrived at Mount Vernon, I had just finished my first week working at the AHA, and I began to see George Washington as an emblem of the historical subject in general. We can never learn all there is to know about a person, time, or event; even if we could, the fascination surrounding that topic should remain fresh because of the manifold angles and lights in which historians can view it. As one with a background in English literature, I am used to thinking of a given literary work’s meaning as inscrutable: all we can ever really analyze are the interpretations of it, as with Ralph Waldo Emerson’s “moods like a string of beads,” which “paint the world their own hue” and prohibit man from seeing anything as it truly is.2 Unlike Emerson, however, I see this metaphor as profoundly positive: it means that history will be forever fresh; scholars will always have something to discover; and there will always be a new George Washington to meet around every corner.

Stephanie Kingsley is the AHA’s web and social media editor. Follow her @KingsleySteph.