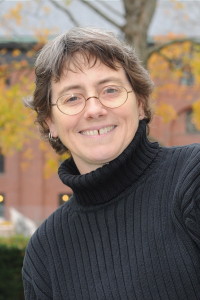 Claire Bond Potter is a professor of history and co-director of the Humanities Action Lab at The New School, blogger at the Chronicle of Higher Education, and co-editor of Since 1970: Histories of Contemporary America. She lives in Manhattan, New York City, and has been a member since 1986.

In the seventh grade I did a heavily researched oral report for my ancient history class about the preparation of Ancient Egyptian bodies for mummification which included an extended treatment of how brain matter was extracted through the nose. It was a huge hit, at least with the other students, and I realized that history was an ideal opportunity to entertain people with ideas. However, it was when I was at Yale and Ann Fabian, then a teaching assistant among Yale undergraduates, sent me over to the Beinecke library to write a paper from 19th-century western women’s diaries that I suddenly got what it meant to do history. Reading these accounts of the long overland trip to California, the stories just started to leap out of me, and then they came together and made a bigger story. It was a baby step toward being a scholar, not a student.

Two: one is a book of essays with the ambitious title of Digital U: Why Crowdsourcing, Social Media, Word Press and Google Hangouts Could Save the Historical Profession. It comes out of my interest in the digital humanities but my intended audience is history colleagues who have not yet engaged the digital and don’t yet think that it is relevant to their work. The second is Beyond Pornography: How Feminism Survived the Age of Reagan, where I argue that, contentious as they were, the feminist sex wars kept conversation about gender equality on the table despite the determination of conservatives to silence that conversation.

I am also helping to build The Humanities Action Lab at The New School for Public Engagement, which is where our digital humanities curriculum will be established in the next few years. I’m also a co-director of OutHistory.org, the LGBT history website, and of course, I write the blog Tenured Radical at the Chronicle of Higher Education.

Enormously. The place of gender and sexuality is really at the center of my interest in political history, whereas when I completed my PhD it was one of several themes in my work. Possibly one of the biggest shifts has been my embrace of the digital as a way of thinking about history. In many ways I am a late adopter, since it was exactly when I was in graduate school that members of the Radical History Review collective were starting to carve out a space for what some called “humanities computing.” But better late than never, right?

Perhaps the best book I’ve read recently is Judy Tzu-Chun Wu’s Radicals on the Road: Internationalism, Orientalism, and Feminism during the Vietnam Era (Cornell, 2013). I think Judy sets a high standard for what the political history of feminism ought to look like: intersectional, international, deeply researched, and beautifully written.

People are very generous, and a large number of historians tend to be genuinely interested in each other, and in work outside their field. I came into the historical profession in the second or third wave of feminist scholars to really make an impact on the historical profession, and as I was making my way, so many people helped me, particularly other women, but also lots of men. I’m still quite stunned at how generous the vast majority of other historians are in sharing their time, their advice, their networks, and their expertise. If I look back over my career, the number of men who gave my generation a helping hand at crucial stages also kind of overwhelms me.

I joined the AHA in graduate school because it seemed like that was what I should do if I wanted to become a professional historian: take the journal, go to the meetings, and generally identify with the profession. I still think that’s true. I understand that younger scholars sometimes doubt whether professional associations are relevant, given the contemporary challenges of making a career in history. But if you don’t join, you don’t have a voice at the table, and you aren’t doing your part to support the work that the Association does more broadly on behalf of all historians at a moment when the federal and state budget lines that our work requires are low-hanging fruit.

Other than the four-day snowshoe trek back to the Northeast from Atlanta back in the 1990s? Perhaps it was going to the Oxford book party when I was an advanced graduate student (I am going to date myself and reveal that they were still called smokers then, and were held in hotel suites) and feeling a little lost. Someone introduced me to Pete Daniel, and then Pete introduced me to a bottle of bourbon someone had stashed behind a chair, and we spent the next couple hours consuming it while he told me hilarious insider stories about the Smithsonian Museum. Which also tells you what a geek I am.

I’m passionate about the kinds of conversations that are going on between scholars and their publics in social media, and the ways that digital media opens the door to more democratic forms of access to education, to primary sources and to the capacity to collect and curate private collections. I’m also extremely excited about the possibilities of using the Internet to bridge old and new: how do you use a web-based project to inspire people to visit a paper archive? What are the financial and intellectual models that could make true Open Access publishing a reality? How do we form new intellectual communities that get us out of our department and university silos and into collaborative networks?

I think the big cloud hanging over our heads right now is the employment problem, but I actually think a lot of young people are figuring out for themselves what to do with a history PhD. I’m very glad that the AHA is taking the lead on featuring these careers off the traditional tenure track, and I hope that the next stage is going to be departments working with graduate students to better tailor the PhD, and the expectations of faculty, to an ongoing reality that makes these jobs so important. I’ve found in my travels that a lot of graduate students have great ideas about what they would like to do if they don’t get a tenure-track or full-time job, and they don’t have enough resources, or opportunities, to develop these ideas. I think we need to fight for jobs and, at the same time, be creative about how to make these ideas into concrete opportunities.