A Historian in a Professional School of Politics 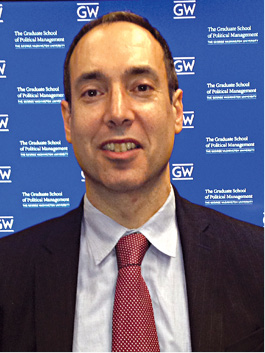 My career path is one that I could never have envisioned when I began graduate school at Columbia in 1992. I could not have known then that graduate school would circuitously lead me to a job as a political speechwriter, or that a think tank might support my research agenda even if I wasn’t a professor of history. Nor did I realize then that I might be able to find a job in academia outside of a history department. None of these options were on my radar in the early nineties. But all three of these paths have opened up for me in the 15 years since I finished my academic training. It’s hard for me to imagine having had any of these opportunities without my PhD and, most importantly, the intellectual training and the development of research skills it provided.

Nine months after graduating from Berkeley with a BA in history, I moved to New York to begin my graduate studies. My dad, a historian who has published more than a dozen books, seemed to have a pretty good career and was an inspiration to me as I grew up. He taught his classes, wowed his students, lectured to audiences across the country, and sat in his study surrounded by books and documents as he wrote award-winning presidential biographies and studies of foreign policy. His job gave him the Holy Grail of academia—flexibility, autonomy, stability, a solid middle-class income, and best of all, the creative space in which to publish books of original research on topics about which he was passionate.

When my dad finished graduate school in 1964, he received five job offers; to state the obvious, that world is no more. When I entered graduate school at the age of 22, I had never held a full-time job, but I also was under few illusions. Despite my fascination with political history, I was not sure that the traditional academic path was my cup of tea, nor was I willing to relocate to anywhere I was lucky enough to find a tenure-track job.

Graduate school opened horizons for me beyond the academy in ways I hardly knew possible when I set foot in Morningside Heights. My adviser, Alan Brinkley, a model of scholarship and teaching, believed that his PhD students had options beyond finding tenure-track jobs at research institutions. As a research assistant to journalists writing books on historical and contemporary affairs, I also had access in graduate school to nonacademic models of writing and research that I admired. And like-minded friends from my program showed me how to publish book reviews, essays, and op-eds in newspapers and magazines—and reach wider audiences.

As I finished my dissertation and turned it into a book, I learned that my friend in Washington, Jeff Shesol, had landed a job as a Clinton White House speechwriter. Jeff had published a book on presidential history (on Robert F. Kennedy and Lyndon B. Johnson) and now he held a job that would help shape it.

Suddenly, thanks to Jeff, a new path opened for me. My jobs as a speechwriter—first for the Federal Communications Commission chairman and then for House Democratic leader Richard Gephardt—were among the most rewarding positions I have held, and my historian’s education was never far from my thoughts or work. My historical training had helped convince me of the power of contingency in shaping political affairs, and that was borne out in my time with Gephardt. During the 2000 presidential election recount, I realized that the struggle for victory came down to bare-knuckled politics, rather than an abstract function of the rule of law, and that the outcome hinged on which side marshaled its forces most effectively amid the electoral chaos in Florida. The ashen look on the faces of colleagues when we returned to work in the Capitol Building on September 12, 2001, and the fear that members of Congress and staff felt, showed the inability of political leaders to control forces much larger than themselves.

My historian’s education taught me to observe and appreciate my surroundings and made me, I hope, a more thoughtful speechwriter. I stood in the back of the House chamber as George W. Bush delivered his September 20 address on the War on Terror to a joint session of Congress. I got to watch Gephardt and Senator Tom Daschle prepare to deliver the 2001 response to Bush’s State of the Union address in Senator Ted Kennedy’s Capitol hideaway.

My historical training helped me to look critically at all sides of complicated issues, to inhabit a world filled with shades of gray rather than one of clear prescriptions sometimes favored by the most partisan of lawyers, policy experts, and hard-charging regulators. My training enabled me to step back from the daily grind and gave me historical perspective on what I was seeing and experiencing. The research skills I had gained in graduate school were invaluable in writing speeches, and my historian’s curiosity about ideas and issues lent itself well to a job in which I got to draft remarks on virtually every topic, from taxes and spending to Social Security, immigration reform, health reform, LGBT rights, and the war in Iraq, to name just a few issues.

These national debates—all of them with deep roots—made me more sympathetic to the idea that politics was the study of human affairs—of emotion, psychology, and personality, but also of broad forces in society that no person, no matter how skilled or powerful, could single-handedly master. Politics also taught me things that graduate school couldn’t. For example, I gained an appreciation for the intelligence, passion, and genuine conviction that many of my colleagues possessed—something that can be overlooked in the acidic perspective that most Americans seem to have adopted toward Congress in particular and Washington in general.

My years as a speechwriter were some of my most rewarding professionally. But I concluded, in the end, that I was more suited to teaching, researching, and writing about politics and history than I was to being an aide to an elected official. Returning to academia has been neither a simple nor a smooth transition, but it has had its share of rewards. While I knew that landing a traditional academic position in history would be unlikely after having worked in politics, other paths beckoned. I developed a second book project, began to teach as an adjunct, and consulted on the side, and when I won a fellowship at the Woodrow Wilson International Center for Scholars, I forged bonds with fellow scholars who have become close friends. My historical training was directly applicable while teaching subjects beyond history.

As an associate academic director at the University of California Washington Center (UCDC) from 2010 until August, I had a full-time teaching load, directed the summer school, and carved out time for my own writing. Both my Wilson fellowship and my job at UCDC provided new mentors—among them Philippa Strum, former director of the US Studies Division at the Wilson Center, and Bruce Cain, UCDC’s former director and now a political scientist at Stanford. Strum leads a group of six alumni from the Wilson Center (named the “Red Line Group” because we all live near Washington’s red line metro); we meet monthly and read each other’s chapters, provide constructive feedback, and cheer each other on as we strive to finish our books. These five women from a variety of disciplines have collectively imparted to me knowledge about scholarship, teaching, collegiality, and publishing in ways that are hard to find in more traditional, less fluid academic settings.

The combination of political experience and academic historical training most recently helped me land a job as an assistant professor of political management in the Graduate School of Political Management at George Washington University. I am confident that historical perspective, knowledge, and research can be invaluable in the teaching of applied politics to master’s students. Some working knowledge of how historical forces drive social and political change and a grasp of how we have arrived at our current political moment arguably make one a more responsible campaign or communications strategist, lobbyist, or political leader. My new colleagues are receptive to historical research that has implications for the practice of politics, and my historical training, coupled with my political experience, has allowed me to tackle contemporary issues with history and contemporary politics in mind.

If I have learned one thing since finishing my PhD, it’s that the historical training I received has given me not just a credential but also an entrée into the world of politics, think tanks, Washington-based undergraduate programs, and professional schools in the academy in ways that I never could have predicted when I was a graduate student. History departments should encourage graduate students to acquire skills and consider paths beyond tenure-track history jobs. And graduate students should seek part-time work while in graduate school in fields that may be of interest to them outside the academy—in case they opt for an alternate path, which, I discovered, can be just as rewarding as the traditional one.

Matthew Dallek is an assistant professor in the Graduate School of Political Management at George Washington University. He is working on a book for Oxford University Press about Eleanor Roosevelt and Fiorello La Guardia’s efforts during World War II to establish a wartime New Deal and defend America from enemy attacks through the Office of Civilian Defense.