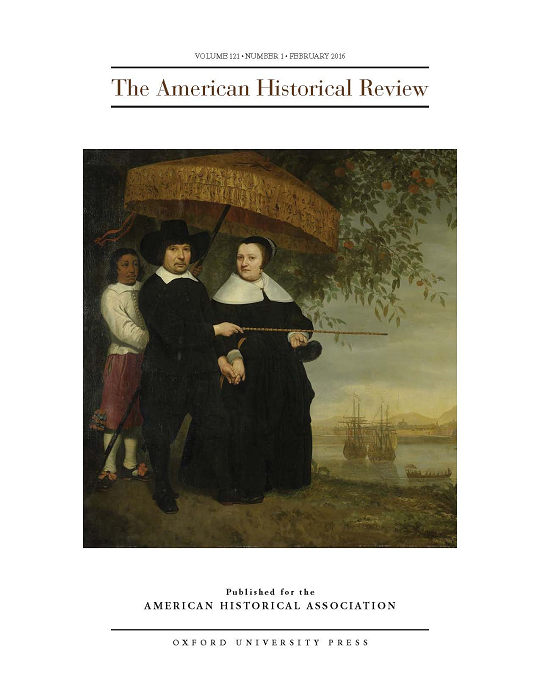 In her Presidential Address, “Class Acts: Latina Feminist Traditions, 1900–1930,” outgoing AHA president Vicki Ruiz considers the exemplary lives of a pair of transnational female labor radicals, Luisa Capetillo and Luisa Moreno (née Rosa Rodríguez López). Tracing the complex geographic and political itineraries of these early Latina feminists, Ruiz considers how class, gender, sexuality, ethnicity, and radical culture shaped their lives as women and as rebels, in both Latin America and the United States. “With all of these tensions,” Ruiz concludes, “the writings of . . . ‘las dos Luisas’ reveal vital threads of a Latina transnational feminist consciousness.”

Three articles follow Ruiz’s address. Adam Clulow’s “The Art of Claiming: Possession and Resistance in Early Modern Asia” considers European claims to possession in early modern Asia and in particular a string of territorial acquisitions made by the Dutch East India Company in the first half of the 17th century. Noting that possession claims encapsulated the key act of European expansion, Clulow focuses both on the complex legal mechanisms the company used to justify its hold over territories in Taiwan and the Banda Islands and also on East Asian mercantile actors’ counterclaims. The process of looking for counterclaims, he suggests, is productive, revealing connections between otherwise neglected events or actions that cohere to form patterns of legal opposition. Clulow reveals that legal resistance was the pervasive byproduct of expansion and that different groups were able to mobilize arguments that struck at the heart of the company’s claims to territory.

The next article shifts attention to the Dutch imperial world in the Western Hemisphere. In “Dodging Rebellion: Politics and Gender in the Berbice Slave Uprising of 1763,” Marjoleine Kars examines the long-lasting but little-known 1763 slave uprising in Dutch Berbice, a small colony next to Suriname on the Caribbean coast of South America. Interested in the lived experiences of the enslaved, Kars moves beyond the military conflict between rebel leaders and slave owners, on which historians most often focus. Using rich records generated in Berbice over more than a year of insurgency, she argues that the uprising did not encompass all slaves in the colony but was the work of a determined minority who coerced others to join. Many enslaved Berbicians were neither purposeful rebels nor committed collaborators or loyalists. Eager to stay alive and preserve their independence once slavery was overthrown, the uncommitted (many of them women) struggled to dodge both the colonists and the rebels. A focus on internal politics reveals that armed emancipatory rebellion was profoundly gendered and hierarchical, and thus exacerbated existing divisions within the enslaved community.

Moving to 20th-century Europe, in “Infinite Power to Change the World: Hydroelectricity and Engineered Climate Change in the Atlantropa Project,” Philipp Nicolas Lehmann examines the utopian Atlantropa Project of the German architect Herman Sörgel. This fantastical hydroelectric scheme serves as a window onto the interconnected histories of environmental anxiety and technological optimism in Europe during the first half of the 20th century. The main feature of Sörgel’s vision was a gigantic dam across the Strait of Gibraltar, which would (he imagined) create a connected and climate-engineered Afro-European supercontinent, as well as provide a potentially inexhaustible source of hydropower. Sörgel believed that the availability of cheap and boundless energy would inaugurate a peaceful era and form the basis for a coming unified and revitalized European society. Lehmann argues that these plans were more than the expression of an eccentric mind. Sörgel’s anxieties about environmental decline and resource exhaustion, and his belief in the primacy of technology, reflected contemporary debates and struck a chord with the German public. Atlantropa thus stands as a striking example of both the entanglement of environmental and political ideas in interwar Germany, as well as the understudied history of unrealized utopian projects of high modernism.

Kenneth Lipartito’s review essay, “Reassembling the Economic: New Departures in Historical Materialism,” examines recent writings in economic and business history. This scholarship, he shows, casts new light on major transformations in world history—industrialization, capitalism, and the global economy. This new literature avoids the structural determinism of old with much greater sensitivity to politics, culture, and social institutions. To a lesser degree, it bridges the gap between social scientific history, often written by those trained in economics, and the more narrative styles of those trained in history departments. Taken as a whole, this scholarship offers a substantial rethinking of how we should engage material life, including the natural world. Woven through the various works is a new ontology that grants agency to things as well as people while avoiding the traditional tension between the power of external structures and the autonomy of human consciousness. This new materialism allows historians to bring markets, finance, capital, technology, corporations, and other economic features of the past back into historical narrative.

In the belief that the burgeoning world of digital scholarship deserves fuller critical engagement, February’s AHR Exchange, “Reviewing Digital History,” inaugurates this feature with a pair of reviews and responses. The best digital history sites not only find new ways of presenting old data, they also deploy the medium to open up new interpretive possibilities that more traditional analytical techniques have failed to disclose.

Both digital sites reviewed here manage this by plotting data gleaned from familiar sources of social history—diaries, correspondence, legal records, newspapers—onto digital maps. The reviewers evaluate the degree to which these digital history projects succeed in opening new vistas with this method.

In his invited response, Stephen Robertson, one of the site’s co-creators, suggests that Sternfeld’s assessment is skewed because he does not recognize the category of digital scholarship into which the site falls or evaluate the project in terms of what it is trying to accomplish. Digital Harlem, according to Robertson, was designed as a research tool to combine and map a heterogeneous set of sources to reveal spatial patterns and relationships, which could then be explored and interpreted in traditional peer-reviewed publications. Robertson points out that Sternfeld evaluates the site as if it is instead a digital collection that has chosen a tightly defined subject, homogenous data, and focuses on the existing historiography. As a result, Robertson claims, Sternfeld overstates problems with the data, mischaracterizes the site as concerned with crime, and fails to recognize how Digital Harlem visualizes facets of the daily lives of ordinary residents and relationships grounded in place that are missing from the existing picture of the neighborhood.

In an accompanying review of recent digital scholarship, Natalie A. Zacek evaluates the significance of the website Slave Revolt in Jamaica, 1760–1761: A Cartographic Narrative, created by historian Vincent Brown to both answer and provoke questions about a series of slave uprisings and their eventual repression by Jamaica’s colonial government. She briefly outlines the technological and scholarly developments that made such an elaborate website possible and desirable, and assesses the site’s importance as a source for both undergraduate teaching and academic research. While not entirely convinced by Brown’s ambition to use digital technology to reveal “something that is difficult to glean from simply reading the textual sources,” Zacek finds much value in the site’s ability to use digital mapping technology to raise new questions about the unfolding of the revolt.

Vincent Brown, in his response, reminds readers that the maps in Slave Revolt in Jamaica address elementary historical questions—what happened, when, and where—to reveal something about why the greatest slave insurrection in the 18th-century British empire played out as it did, and with what implications. Brown points out that his site raises important questions about the production, circulation, and reception of historical narrative beyond the print medium. What can we learn from digital presentations of history that we don’t already know or couldn’t just as easily learn from print? He concludes that even as digital scholarship reaches and informs its audience in new ways, historians must still impart old-fashioned narrative methods for reading and interpreting sources.

Alex Lichtenstein is associate professor of history at Indiana University Bloomington and interim editor of the American Historical Review.