If there’s one thing almost everyone across the political spectrum seems to agree on, it’s that Congress is broken. 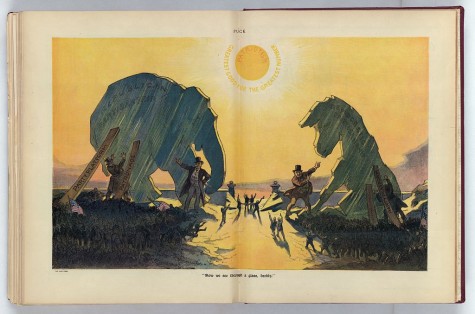 As this illustration from 1910 demonstrates, partisan politics in Congress today is certainly not without history. “Now we see through a glass, darkly,” Udo J. Keppler, 1910. Library of Congress.

There’s also widespread agreement that an unprecedented level of political partisanship is to blame. Is it truly unprecedented? And how did conditions in Congress get so toxic? The National History Center’s latest Congressional Briefing took on these questions last Friday. Fittingly, it occurred in the belly of the beast, a meeting room in the House Cannon Office Building.

Donald Ritchie, historian emeritus of the Senate, moderated the briefing, which featured Joanne Freeman, a professor of history and American studies at Yale University, and Brian Balogh, a professor of history and director of the Miller Center’s national fellowship program at the University of Virginia. They did what historians do best: use the past to provide perspective on the present.

The problem of political partisanship has vexed the republic since it was founded. In his introductory remarks, Ritchie reminded us that George Washington had warned against political parties and partisanship in his farewell address. Freeman reinforced Ritchie’s point with her eye-opening account of the “cycles of stridency” that occurred in the 1790s and the 1850s, quickly disabusing her audience of the idea that the current partisan environment is unprecedented.

As Freeman noted, presidential elections caused intense partisanship in the 1790s and culminated in the contentious election of Thomas Jefferson in 1800. (Several states were prepared to call out their militias in case of a different outcome.) As for Congress itself, the hyper-partisanship that plagued the body in the 1850s is hard to match. Members of the two chambers packed heat, made death threats against one another, and engaged in fistfights and group brawls. One congressman even received a pistol engraved with the words “Free Speech” as a gift from his constituents as he left for Washington, DC. Freeman identified two factors that contributed to this overheated environment. One was the growing interconnections between Congress, its constituents, and the press, made possible in part by the spread of the telegraph. The other was the political instability manifested in the collapse of the Whig Party, the fracturing of the Democrats along regional lines, and the rise of the Republicans, which resulted in diminished faith in Congress as the problem of slavery rose to new heights.

Balogh began his presentation by pointing out that in the 1950s, an American Political Science Association report worried that the dearth of ideological distinction between the two political parties was undermining participatory democracy. How did we get from this anxiety about the absence of partisanship to the contrary conditions today? Balogh noted that the shift began in the 1960s. The passage of the Civil Rights and Voting Rights Acts drove southern whites out of the Democratic Party and made African Americans its most reliable voting bloc. Republicans, in turn, increasingly became the party of white churchgoers, especially evangelicals. This resulted in the solidifying of ideological and geographical divisions between the two parties. Meanwhile, Newt Gingrich disproved the old saying that all congressional politics is local when he launched his highly successful “Contract with America” campaign in 1994, which produced a more partisan and polarized Congress. Simultaneously, the proliferation of party primaries gave greater power to ideologically motivated voters, who punished candidates willing to engage in cross-party compromise. Finally, the media underwent dramatic changes—cable TV’s 24-hour news cycles, the rise of right-wing talk radio, the increasingly refined use of polling data, etc.—that fragmented audiences and forced parties to accentuate their differences. The cumulative effect of these factors was the intensely partisan environment that currently informs congressional politics.

The question-and-answer session that followed amplified some of the preceding points while adding others. One issue that arose repeatedly was the relationship between political parties and partisanship. We tend to associate the two, but Freeman pointed out that the partisanship of the 1790s occurred before the development of distinct parties, and in the 1850s when political parties were in flux. Balogh, in turn, noted that ideological differences did not clearly align with parties in the 1950s and that partisanship within Congress has grown more intense even though party institutions and party loyalties among the public have weakened in recent decades. Ritchie also reminded everyone that partisan conflicts play out differently in the Senate and the House due to the different rules governing relations between the majority and minority parties in the two chambers.

While the panelists did not intend to provide prescriptions for reducing partisanship in Congress, everyone attending the session certainly came away with a fuller appreciation of the complexity of the problem. We might take solace in the fact that congressional partisanship today has not led to the physical violence that antebellum congressmen engaged in. Still, that’s small comfort given the increasingly polarized, invective-laced environment in which today’s Congress operates—or fails to operate. With a presidential campaign that grows increasingly contentious and unpredictable by the day, two political parties that advocate starkly different policies and face ominous signs of internal fragmentation, and a cacophonous media that supercharges the ideological divisions among voters, there seems little reason to expect that congressional partisanship, which has driven the institution’s reputation to abysmal lows in recent polls, will lessen any time soon.

Update: A video of this congressional briefing is now available on C-Span.