The Legacy of the Voting Rights Act

This year’s 50th anniversary of the 1965 Voting Rights Act has been a bittersweet milestone. The passage of the act is rightly regarded as a landmark legislative achievement. It largely eliminated discriminatory restrictions on the right to vote by African Americans and other minority groups. Despite the diehard resistance of southern segregationists and a rising chorus of conservative legal critics, Congress repeatedly reauthorized the act, most recently in 2006. In 2013, however, the Supreme Court invalidated a key provision of the act in Shelby County v. Holder. Chief Justice John Roberts framed the decision in historical terms, stating that “our country has changed in the past 50 years.” With an assessment of the relationship between the past and the present informing the court’s view of the act, it seemed appropriate to have historians weigh in on the issue. Hence the National History Center’s congressional briefing last Friday. 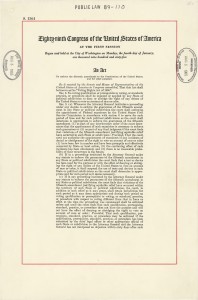 The first page of the Voting Rights Act of 1965.

Our briefing was conducted by Julian Zelizer of Princeton University and Orville Vernon Burton of Clemson University. Zelizer is a prominent historian of modern American politics, with books on Congress, the presidencies of Reagan, Carter, and George W. Bush, and various other topics. His latest book is The Fierce Urgency of Now: Lyndon Johnson and the Battle for the Great Society (2015). Burton is an equally distinguished historian of the South and related subjects in American history. He also has served as an expert witness for plaintiffs in voting rights cases, most recently in legal challenges to voter ID laws in South Carolina and Texas.

Julian Zelizer discussed the convergence of forces that brought about the passage of the Voting Rights Act. Although attention often focuses on President Lyndon Johnson, Zelizer stressed three other factors. The most widely recognized of these factors was grassroots pressure from the civil rights movement, which prevented opponents of legislation from employing conventional delaying tactics in Congress. The second was the balance of power in Congress itself. The 1964 election had resulted in huge Democratic majorities in both the House and the Senate, with Republicans chastened by their drubbing. Third, the congressional character of the two parties had changed, with a greater proportion of the Democratic caucus coming from northern states, weakening the power of Dixiecrats and strengthening cooperation across the aisle. Everett Dirksen, the powerful leader of the Senate Republicans, helped to craft a framework for the Voting Rights Act even before the march on Selma. Zelizer noted that it would become much more difficult to pass civil rights legislation when the composition of Congress changed after the 1966 election.

What significance does this history hold for the Voting Rights Act in 2015? Zelizer observed that voting rights are once again under threat as a result of the Shelby County v. Holder decision, along with the recent flurry of restrictive voter ID laws enacted by state legislatures. But any legislative effort to reinvigorate our 50-year commitment to the protection of voting rights would require a very different environment in Congress from the one that currently prevails.

Vernon Burton explained how the Voting Rights Act was designed to work and why the recent Supreme Court ruling is so harmful to its operations. For the first time, state and local election practices came under direct federal oversight. While section 2 of the act bans tests and taxes that interfere with the right to vote, it is costly and difficult for individual plaintiffs to seek redress. A more effective tool of enforcement has been section 5, which requires states with a history of racial discrimination to obtain federal “preclearance” for alternations in their voting policies. When the Supreme Court ruled in 1973 that multi-seat or at-large districts were discriminatory, Section 5 was used to enforce the ruling, leading to more minorities winning elections at all levels of government.

Like Zelizer, Burton argued that the Supreme Court’s Shelby County v. Holder ruling and the state voter ID laws are serious setbacks for voting rights. Although the Roberts Court did not outlaw Section 5 directly, its invalidation of Section 4, which specified the states subject to preclearance, made Section 5 unenforceable. Moreover, 21 states have instituted voter ID laws since 2010 that have had a disproportionately adverse effect on poor and minority voters.

The briefing attracted a large and diverse audience, and the question-and-answer session that followed Zelizer’s and Burton’s formal remarks ranged across a number of issues. Topics included the relationship between voting rights and the current “Black Lives Matter” campaign, the impact of technologies like smart phones as instruments of citizen empowerment, and considering US voting rights practices in a comparative context. Sadly, there was scarcely any discussion of the role Congress might play in rectifying recent setbacks in voting rights. This silence served as unspoken confirmation of Zelizer’s observation that the current composition of Congress offers little hope of action to protect the heroic accomplishment of its predecessor 50 years ago. Burton made a similar point, wryly noting that historians “usually devote their attention to subjects no longer alive.”