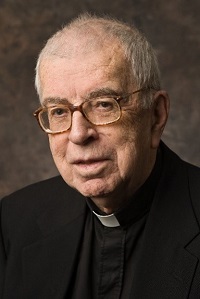 Father Francis Paul Prucha, SJ, life member of the American Historical Association and longtime member of the history department at Marquette University, died on July 30, 2015, at age 94. A specialist in the relationship between Native Americans and the United States government, Prucha published or edited more than 25 books. His two-volume The Great Father: The United States Government and the American Indians won the Ray Allen Billington Award from the Organization of American Historians and was one of two finalists for the 1985 Pulitzer Prize in history.

Prucha published books on nearly every aspect of Native Americans’ relationships with white Americans, ranging from military campaigns to trade relations, from treaties to treaty medals, and from education to missionary work. He also published numerous volumes of documents, bibliographies, maps, and guides to researching Native American history.

Born in River Falls, Wisconsin, in 1921, Prucha attended Wisconsin State Teachers College, then served in the US Army Air Corps from 1942 to 1946. He earned his MA in 1947 from the University of Minnesota and his PhD in 1950 from Harvard University, where he studied under Frederick Merk. That same year he entered the Society of Jesus; he was ordained in 1957 and assigned to Marquette University in 1960. He remained there for the rest of his career, serving as department chair for several years, winning the Award for Excellence in Teaching in 1973, and serving as the first holder of the Rev. Francis Wade, SJ, Chair. Along the way, Prucha held visiting professorships at Georgetown University, Harvard University, the University of Oklahoma, Boston College (where he was the Thomas I. Gasson, SJ, Chair), and the University of Washington (where he was Scott and Dorothy Bullitt Chair in American History). He was named a fellow of the Wisconsin Academy of Sciences in 1986, while he received honorary degrees from several institutions, including Creighton University; Merrimack University; Marquette University; Loyola University, Chicago; and the College of the Holy Cross.

Prucha trained generations of doctoral students in history at Marquette, where the department gives the annual Prucha-Theoharis Award to the outstanding history graduate student. He also helped establish the Raynor Memorial Libraries’ Christianity and Native America collections, which include the records of the Bureau of Catholic Indian Missions. The reading room in the library archives is named after him.

Prucha had a long and distinguished relationship with the Western History Association, serving on the editorial board of the Western Historical Quarterly and as the organization’s 22nd president in 1982–83. The WHA’s Arrington-Prucha Prize recognizes the best journal article published each year in Western religious history.

Beyond his extraordinary scholarly achievements, Prucha will be remembered for his demanding standards (for himself and for his students), his work ethic, his love of modern art (and his own experiments in constructing complex polyhedrons), his stern but committed mentoring of graduate students and junior faculty, his dry wit, and his abiding faith.