I’ve never been into children’s books.

Even when I fell squarely in that all-important 8-to-11-year-old demographic, I didn’t care too much for enterprising babysitters, dystopian futures, or strange happenings in the old schoolhouse. For my beloved sustained silent reading time at school, I brought unauthorized biographies of Elizabeth Taylor and Hillary Clinton from home. I don’t know if my early reading habits were particularly wholesome, but I realize now that I was attracted to more grown-up books because I didn’t like that so-called girls’ books always had a standard exposition and pat conclusion. Even the somewhat edgier Nancy Drew series delivered the same ending every time: Nancy never failed to decipher the mystery by winding an antique clock or tapping a fake bookshelf. The cynicism that serves me well as a historian today was nursed on the stuff I believed that adults read. I enjoyed reading about real-life challenges—dramatic accidents, lost fortunes, and divorces from Richard Burton. 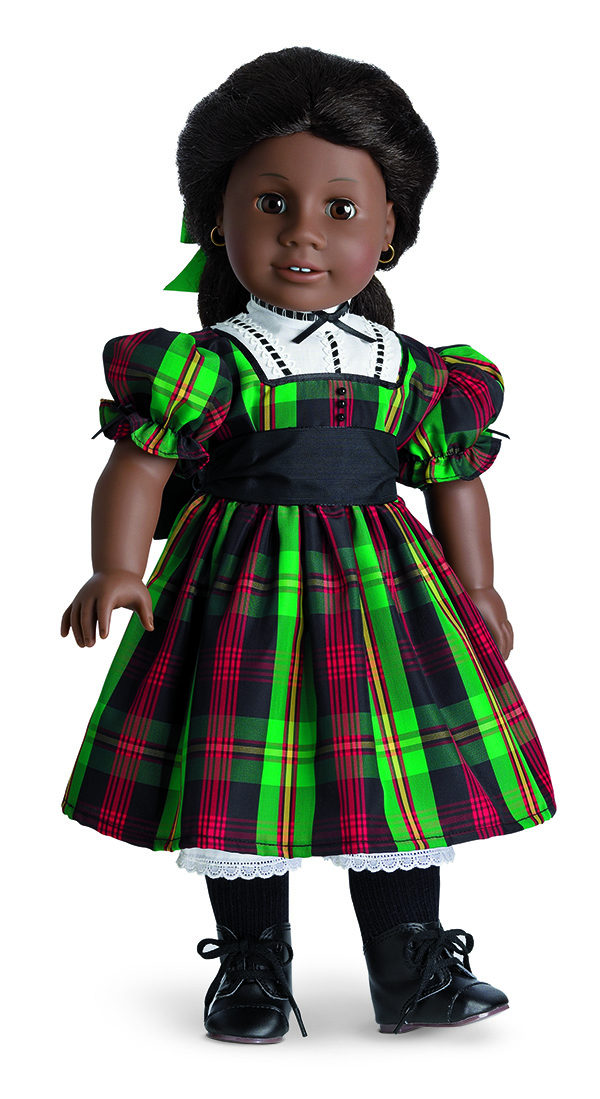 So, when Perspectives on History asked me to take a look at the American Girl series, I was discovering the bestselling books for the first time. American Girl, originally the brainchild of the Wisconsin-based Pleasant Company, debuted in 1986, with a mail-order catalog of collectible dolls outfitted in historically specific costumes accompanied by short novels. Children learned about Kirsten’s dirndl and Felicity’s support of the American Revolution through a six-book sequence illustrating pivotal moments in US history, including immigration, wars, and social movements. After Pleasant Company sold the concept to Barbie’s corporate parent Mattel in the early 1990s, American Girl shifted gears. Although it expanded the line of historical dolls, American Girl attracted more loyalists with dolls that could be customized to look like their owners, clothes for girls that matched the dolls’ fashions, and a chain of retail locations where tea parties, doll surgeries, and frenzied holiday shopping immediately commenced.

When the books arrived at my office, I wondered if my jaded, critical lens on children’s culture and my commitment to feminist history could appreciate books designed to interest children in history. I was surprisingly pleased by what I read.

I read eight editions of the American Girl BeForever Classic books, which are bundled versions of the 1980s originals. The stories depict girls whose diversity ranges from Kaya, a Nez Perce Indian girl of 1764, to Julie, a white San Franciscan of 1974. On the whole, most of the books take a “great girl” approach to history. The heroines of these stories are courageous, navigate the encroachment of enemy forces, escape slavery, and elevate feminist consciousness. They do so in consultation with adults, but ultimately the books make clear that it is a single girl who makes the difference. Boston Brahmin Samantha Parkington takes on the problem of child labor in her Victorian world by delivering a stirring oration on her friend Nellie’s experience as a factory worker. Samantha has already established her own “school” to help Nellie and other poor children forced into remediation because they never previously attended school. Samantha’s stance against classism fundamentally changes the lives of the servant children around her. The historian in me finds these “girl power” narratives a bit grating, but I appreciate American Girl’s intervention in a market filled with few substantive depictions of girls’ lives. Unlike sitcoms starring tween girls, BeForever books don’t belittle or demean adults and parents; they keep in mind the agency and abilities of girls.

Using the backdrop of a carefully researched historical period, each girl in the series confronts a moment of peril or an ideological conflict on her own. Due to the serialization of the stories, the books also teach young readers that although a girl can shape the course of history—as Caroline Abbott does when she smuggles a map to her father after he is captured during the War of 1812—she cannot necessarily fix everything. Kit Kittredge learns this lesson when her family unravels in Depression-era Cincinnati. The Kittredges take in boarders, and Kit’s father considers leaving to search for work in Chicago. At the conclusion of Kit’s story, she learns how to accept help from others and to remain generous during a period of scarcity—but ultimately her good attitude cannot slow the nation’s economic free fall, and neither can she insulate herself from its consequences.

In the American Girl world, bad stuff happens. The mother of New Mexico’s Josefina dies in 1823. Swan Circling, the warrior woman of Kaya’s tribe, also dies, trying to get medicine for her baby. (The baby makes it.) Even when no one dies, there is a lot of sadness, especially for the most discussed American Girl, Addy Walker. Addy flees from slavery with her mother in 1864, but freedom does not heal old wounds, nor does it mean that life becomes easy. Before she reaches the North disguised in boys’ clothes, her father and brother are sold from their North Carolina plantation. But Addy’s narrative stands out from her American Girl sisters’ because she is the only girl who deals with being fundamentally unfree. Although the story of Rebecca Rubin, a spunky Russian Jewish immigrant in 1920s New York City, gestures toward anti-Semitism, Addy’s story is explicit about racism. It doesn’t neglect some of the traumas of slavery—the sale of the Walker men, the necessity of leaving baby sister Esther behind in escaping to Philadelphia, and the sharp lash of the overseer’s whip. Yet, as a specialist in African American history, I still found myself reading between the lines. I cringed when a guest of Master Stevens patted Addy on the head and asked him, “You sure you don’t want to part with this one?” I automatically thought of the passage in ">Incidents in the Life of a Slave Girl (1861) when Harriet Jacobs describes the moment she became the sexual object of her master. (Addy’s owner responds, “Maybe when she’s a little older, I’ll let her go, too.”)

The best of children’s literature remains honest to its readers by embracing life’s tragedies and ambiguities. Yet, in stirring up an interest in history, the American Girl books too often balance the unhappiness borne out of the great moments of the past with the message that individuals are personally responsible not only for making a difference, but also for remaining upbeat or happy in the face of adversity. In passages that sometimes read like a positive psychology guidebook, girl readers learn that hardship is no excuse for hard feelings, a sentiment that all too often contributes to girls believing they must suppress anger and embrace niceness at all costs. For example, when Addy says she hates white people—arguably a reasonable response to having been enslaved and separated from her family—she asks, “Don’t you hate them, Momma?” “No, I don’t hate white people,” her mother answers. She explains that slavery makes some people hate, but that doesn’t mean they should. Mrs. Walker is a “great woman”; she is forgiving of her enslavers and even has second thoughts about hiding her illiteracy while working for a Society Hill dressmaker.

Fortunately, Addy (the great girl) is unusually bright, able to read and count very shortly after entering school. She saves her mother’s job and teaches her to read, too. Characterizations like these pay attention to the complicated emotional lives of historical figures, but the books’ endless exceptionalism is more in line with tween romances, rather than Nell Painter’s Soul Murder and Slavery. Addy’s book does shatter some binaries, teaching young readers about intra­racial and class conflicts. The author even includes a somewhat grumpy abolitionist—a good departure from many feature films about slavery, which regularly feature white abolitionists as angelic saviors. Addy’s story—like those of the real-life black girls who came of age as slaves and evaded capture—is not black and white, and I appreciate the attempt to make her freedom struggle nuanced and deep.

Nearly 30 years after the American Girl catalog first debuted in the 1980s—while I was rolling my eyes at Madeline and Eloise—the enterprise’s relationship to history has changed. Today’s catalog is online and features web-based games and other additions to the experience of having a doll or a book. But alarmingly, the company appears far less concerned with telling the stories of girls in the past than it is with indulging girls in the present. The historical fiction now competes with a doll collection that allows a girl to make a doll that looks just like her through an endless combination of hair types, skin tones, and eye colors. Perhaps girls’ desire to recreate themselves is the result of a self-absorbed culture gone awry, or maybe girls no longer need to read about history to feel inspired or empowered. I do hope that the American Girl empire maintains some of its commitment to telling stories about girls’ observations of the world. What distinguishes the series from dizzying love stories between humans and vampires or depictions of the aggression of junior high cliques is that American Girl attempts to reflect a complicated and culturally rich story of America. All people, girls included, can benefit from that.

Marcia Chatelain is associate professor of history and African American studies at Georgetown University. Her first book, South Side Girls: Growing Up in the Great Migration, was published by Duke University Press in 2015.