Building an Online Presence as a Historian

As a fourth-year doctoral student in history, I began my dissertation just as COVID-19 shuttered archives and libraries, suspended in-person conferences, and put a halt to classroom teaching. Although public health measures required that I isolate in my apartment with just my books for company, I needed to remain active in my field. Twitter, a site where users post short messages called tweets, emerged as an essential tool for maintaining my network during COVID. 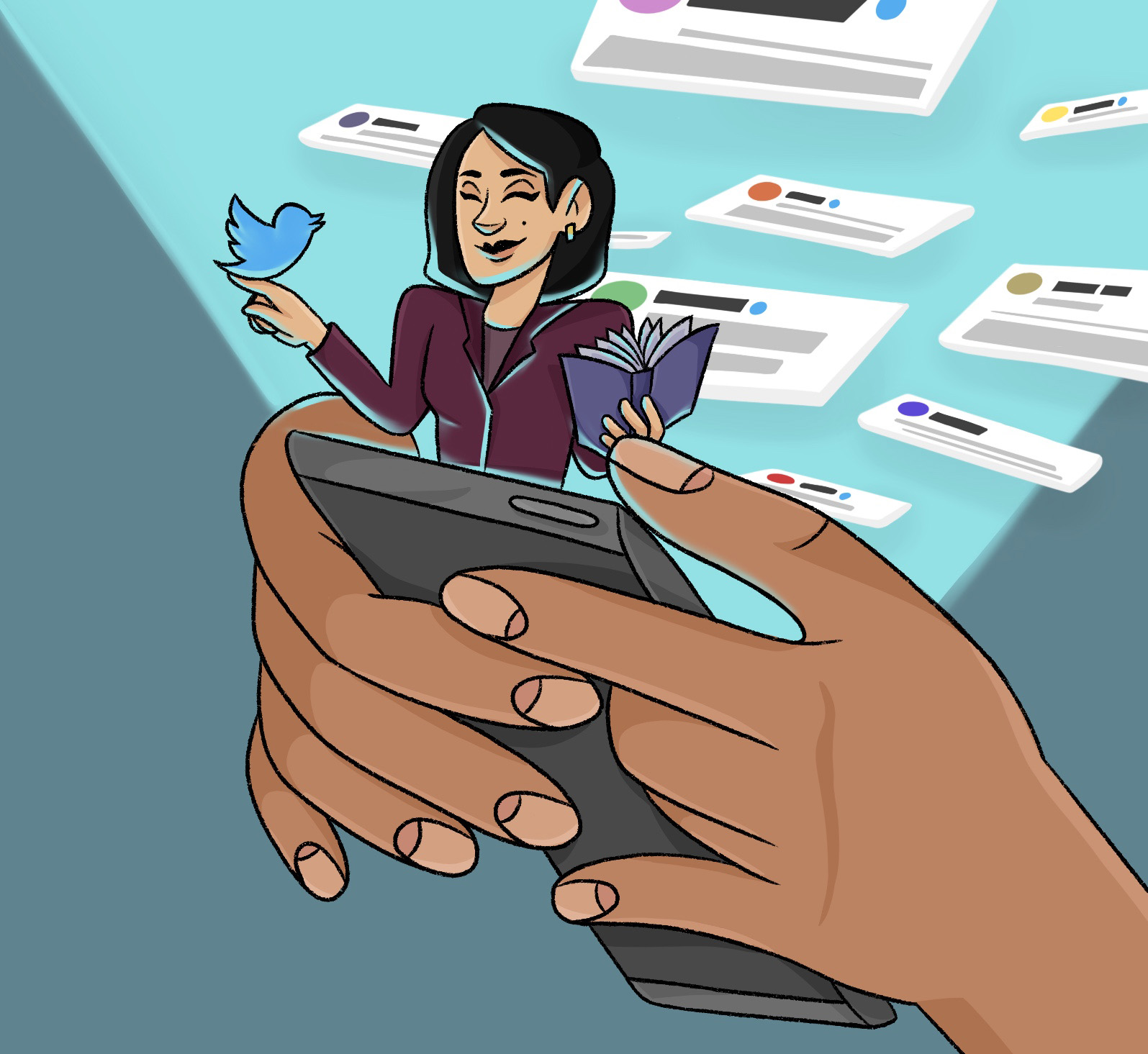 If you only use Twitter to keep tabs on the 24-hour news cycle or the latest memes, you’re missing out on the opportunity to join conversations with scholars in your subfield and connect with people in other subfields and disciplines. During a year characterized by social distancing and independent work, I used Twitter to reduce my sense of personal and professional isolation, build my professional network, deepen my understanding of various subfields, and identify new professional opportunities.

Twitter, like TikTok, Instagram, and other social media sites, can feed into a “doomscrolling” habit (scrolling and seeking out bad news) that takes a toll on mental health and productivity. But if used strategically, Twitter can be a powerful networking tool for historians at all stages in their careers. Building a social media presence is an important professional task that can also be a fun and creative personal outlet. My Twitter presence is a combination of the goings-on in my work life, my reactions to the barrage of daily news, and the private dramas of my life. My former professor Nils Gilman (Univ. of California, Berkeley) described it quite well. He said that my Twitter presence is a combination of “intellectual-professional-political seriousness with a self-deprecating and sometimes absurdist presentation of [my] personal life.” Besides being the kindest thing anyone has ever said about my personal life, Gilman nailed what makes a social media presence work. It is both formal and informal, professional and social.

I wasn’t active on Twitter until 2017, when I started graduate school and joined the conversation happening under the #twitterstorians hashtag. (A hashtag uses a pound symbol, followed by a word or phrase, to collect tweets in one place; #twitterstorians was coined by Katrina Gulliver to foster a community of historians on Twitter.) Since then, I have met more graduate students and professors working in my field than I would have by simply attending events like the AHA or Society for Historians of American Foreign Relations annual meetings. I don’t dispute the benefit of in-person conferences, and I look forward to returning to them after the pandemic ends, but Twitter allows me to spend more time talking with people about my research, sharing resources with them or getting help with teaching, and learning from their experiences on the academic and nonacademic job markets.

If used strategically, Twitter can be a powerful networking tool for historians.

Networking online, even when there is not a pandemic forcing us to stay at home, supports in-person networking too. Initial conversations at conferences can be awkward, but building a relationship over Twitter beforehand decreases that possibility. As we gear up for a return to conferences, symposia, and workshops after the pandemic ceases, the connections I have built online are likely to help me start conversations at receptions or after panels. Historians I admire will not feel unapproachable, and, I hope, more people will feel comfortable approaching me.

Twitter can help historians feel less isolated in their work and research. In May 2020, after a few months in isolation, I used Twitter to bring historians together to talk to each other and the public. Matthew Gabriele (Virginia Tech) and I first connected on Twitter over the massive scale but incredible closeness of the history community, despite the isolation we all feel during the pandemic. Our conversations on Twitter led us to start “Drinking with Historians,” a twice-monthly webcast that invites historians to talk about their work and answer questions from attendees. We initially connect with many of our guests and viewers over Twitter and keep those conversations going on that platform long after the broadcast ends. We’ve hosted historians including Kevin Kruse, Sarah Bond, Ian Millhiser, Eric Rauchway, and Joanne Freeman, discussing historical processes and ideas despite being unable to meet in person. Through Twitter, I’ve gained many personal and professional connections, and though “Drinking with Historians” might sound like a lighthearted event, we’ve used it to create a space to engage the general public as well as trained historians about how historians work and research.

Twitter can also be a valuable tool for historians contemplating careers outside of academia. While departmental programs and conference panels can help graduate students with this transition, Twitter has enabled me to speak directly with people who have been through the process and whom I might not connect with through my department or a professional association. For example, I shared my interest in teaching high school after my PhD and quickly connected with dozens of PhDs teaching in K–12 schools, a professor who led a program to help people with the process of becoming a public high school teacher, someone who worked within the California public high school system, and dozens of other graduate students who are planning to pursue K–12 teaching too. It was invaluable, and reassuring, to hear from those who have already made this transition as I developed my career plans. It was also useful to hear from teachers already in the K–12 system. I hope that I’ve built connections with these people that will grow from professional to personal in the long term.

For most, the benefits to building an online presence will make the risks worth it.

Finally, Twitter has helped me expand my knowledge of current work being done in various subfields. For historians at all levels, this is a real and tangible benefit to being active online. For example, after the January 6 insurrection, I asked Twitter what they’ve read on the history of American fascism for a book chapter I’m writing, and the responses were quick, generous, and useful. This request, in turn, led to an enlightening discussion about the usefulness of the term “fascism” for Americanists. While these discussions can happen at conferences, and now over Zoom, on social media we can react more quickly to events and discuss more ideas as diverse groups of scholars participate.

Discussing my research online has helped me develop relationships with writers and editors at popular outlets. I work on the history of dams in the United States and South Asia. In addition to invitations to discuss my research on podcasts, Twitter exchanges have led to conversations with writers at magazines like Current Affairs. Before COVID made such events impossible, a colleague I met online invited me to a small event where I met with journalists and editors. After this party, I was invited to discuss my research with writers and editors from Current Affairs on their podcast. As a result, the magazine invited me to write a piece about the dam collapses in Michigan this past summer. While discussing your dissertation progress and research findings online can be difficult, it’s incredibly meaningful to share your ideas and work with people outside of academia.

There are, of course, downsides to being online. It can be frustrating, at best, to deal with trolls and bad-faith arguments, but this is where carefully building a network of personal connections comes in handy. Scholars who are new to Twitter should take care to network safely and be aware of any rules surrounding online speech that may apply to them through their employers. The AHA’s Guide for Dealing with Online Harassment is a good place to begin. It includes preparatory steps, like beefing up your email security, as well as steps to take if harassment begins. For most people, though, the professional and personal benefits to building an online presence, especially on Twitter, will make these risks worth it. Ultimately, online networking is a valuable resource for historians navigating their lives as educators, scholars, and citizens.

I am lucky to have received tremendous support from my colleagues and advisers in my department, but the connections I’ve built online are important too. I’ve been able to share my research, learn how to become a better teacher, and gain invaluable career advice. Graduate school can be a lonely process, even more so during the pandemic. Twitter has provided me with a professional and personal outlet for connecting. Tweeting through it has completely changed my graduate experience, my career plans, and my networks.

Varsha Venkatasubramanian is a history PhD candidate at the University of California, Berkeley. She tweets at @varsha_venkat_.