Historians in 2050 will not be able to count on libraries like they do today or as they have for the previous century. Publishing, acquisition, and archival models are changing, especially for newspapers, a key source for understanding the past. Although rare materials such as manuscripts and special collections will continue to be collected and added to collections in much the same way they are now, today’s newspapers may be absent from library collections 30 years from now. If we sound alarmed, that’s because we are. Changes to newspaper collections are the proverbial canaries in the coal mines for the accessibility of standard library resources in the future. 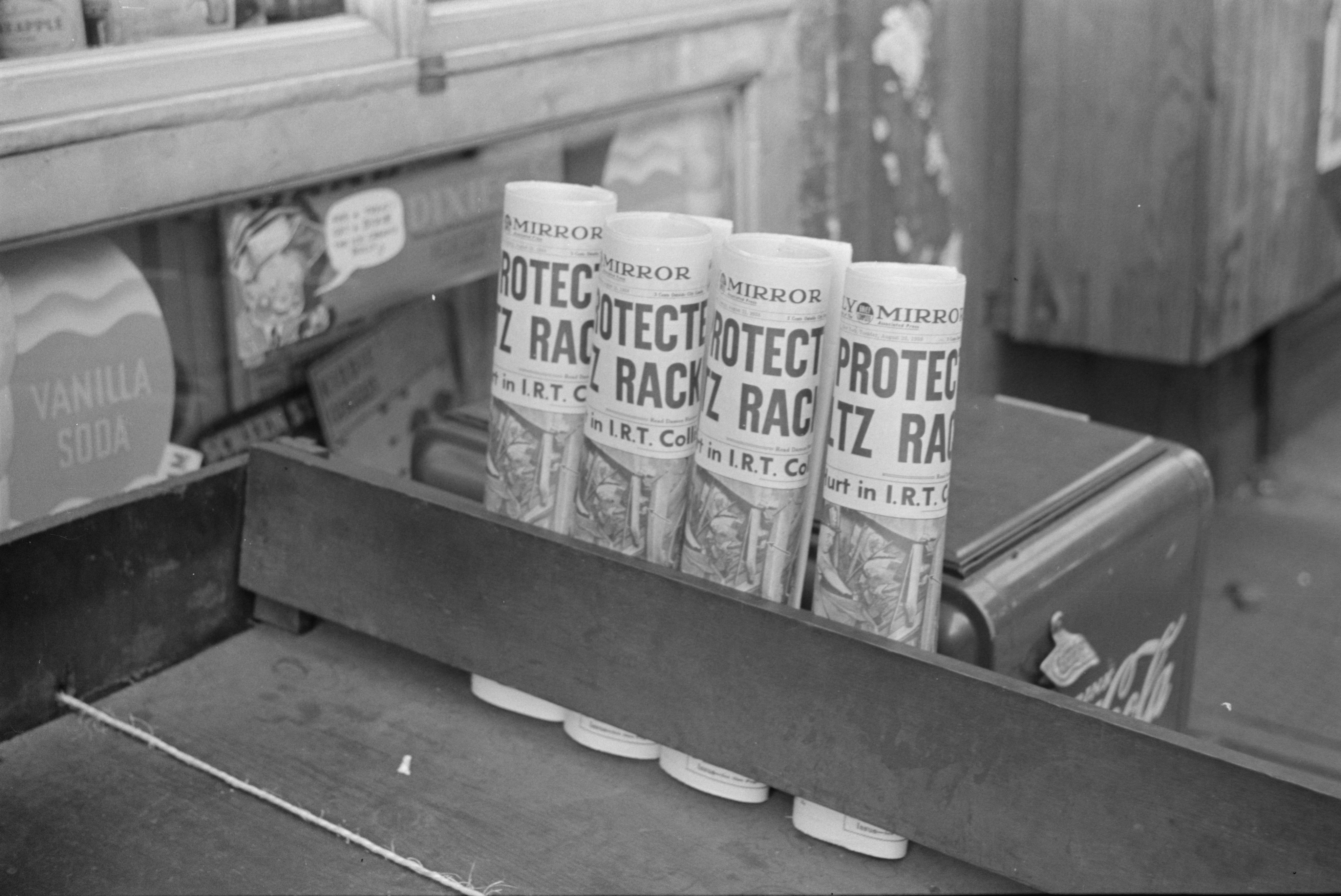 Newspapers for sale at a New York City grocery store during the summer of 1938. Walker Evans/Library of Congress

Newspapers are central to much historical research on the 18th through 21st centuries. They are an essential source for understanding localities, people, and movements throughout time. For decades, libraries purchased the same paper twice, first in print and later on microfilm. Librarians preferred microfilm for long-term preservation, as it took up less space than bound copies and its lifespan far exceeded newsprint. The importance of newspaper collections to research in many fields meant that scholars expected their library to have backfiles of at least one major paper and their local titles. If a local library did not have what a researcher needed, interlibrary loan usually provided the microfilm, obtained from another library. The ease and affordability of accessing newspapers this way brought greater equity to historical inquiry.

Like so much else, the digital revolution changed how libraries saved and provided access to papers. In the 1980s, CD-ROM and dial-up access to expensive online, searchable, text-only databases provided keyword searching but did not offer images of pages, essential to understanding how the reader encountered the paper. As technology improved, expectations changed. By the early 2000s, researchers wanted to be able to search by keywords and see the paper, making page images and PDFs the desired format. Efforts like the Library of Congress’s Chronicling America created both a one-stop portal and awarded grants to states to digitize full-page images of papers in the public domain. The ambitious Google News Archive contained a mixture of pre- and post-1924 papers, but ceased shortly after its launch. Google’s project ran into problems with complex copyright issues and promised revenue to the struggling papers.

Copyright limitations and the perceived value of older issues of certain newspapers created a robust market for library vendors. ProQuest, a major provider of microfilm, launched the first searchable, page-scanned image backfile of a paper with their Historical New York Times in 2001. ProQuest’s success resulted in a small number of library vendors cornering the market on old papers; the vendors decide which titles are scanned, pay papers for exclusive rights, and set the purchase price.

Librarians have always struggled to purchase expensive resources, but large digital historical archives started a new acquisitions model of high upfront costs plus annual fees. For example, in 2006, NewsBank asked the Milwaukee Public Library to pay $1.5 million for access to the archive of the city’s major newspaper. For universities, the significant one-time fee is based on full-time enrollment with a substantial annual maintenance fee. Access to the papers in these databases are purchased under a strict license, protected by a firewall, and effectively prevent libraries from lending more than a single article based on a citation.

Copyright limitations and the perceived value of older issues of certain newspapers created a robust market for library vendors.

In terms of keyword searching, online browsing, and viewing papers as the readers of print versions would have, the real benefits come at the cost of equity. Scholars at wealthier institutions have a greater likelihood of having access to these digital resources, while those at institutions with fewer resources will continue to make do with microfilm, assuming it is available in the future, or traveling to use digital versions. This disparity of access caused one scholar to declare that the “digital divide between the ivory-tower haves and have-nots will be a defining one for our generation of scholars.”

Personal access to the internet created new markets for newspapers’ archival holdings, further challenging libraries’ status as repositories for newspapers. For over a century, the only significant post-newsstand market for newspapers were libraries. Besides the revenue from microfilm sales, there were few additional profits to be made by publishers. But in the last decade, struggling newspaper publishers have realized that they have a huge and untapped market that never purchased microfilm—individuals. When the New York Times created their own archive and began selling personal subscriptions, they created a new business model. The size of this market has caused publishers to slowly abandon the library as the sole conduit to share their products. Costs and licensing terms often prevent libraries from subscribing to many publisher-created archives or from providing unlimited access to current news content. It is reasonable to anticipate that access to many published papers will be more easily available to the individual in the future. This may make information more accessible in the short term, but in the long term it has real consequences for historians who may be expected to pay for their own subscriptions to papers they need to do their work—either because the cost for a library license is too great or the option is not available to their library. Exemplifying this trend are Newspapers.com and The British Newspaper Archive, vendor-created resources marketed to individual genealogists, not libraries.

While these changing business models will decouple the newspaper archive from the library, they will keep content available. We fear this is not going to be the case for born-digital content. For researchers to use born-digital content in the future, there must be plans for its storage and archiving. Storage is for emergency data recovery and does not ensure that the materials are or will ever be accessible to researchers. Archiving is long-term preservation, which assures that content will be available in spite of changes in technology and includes enhanced access, such as metadata, indexing, and keyword searching. In the absence of hard copies stored in a local repository, storage, archiving, and access to the archive are the responsibility of the publishers, many of whom do not recognize the difference between storage and archiving, neither of which is their priority.

Big national papers like the New York Times and the Washington Post do have archiving systems in place, but many smaller papers cannot afford the required technology, staff, and server space. While many publishers likely have some kind of storage or backup for their content, they generally have no formal plan to archive and preserve their born-digital content. They rely, reluctantly or by default, on third-party organizations such as the Internet Archive to store and provide access to their content. The Internet Archive’s bots capture a page of a newspaper website in a moment in time—sometimes several times a day, sometimes only a few days a week or a few days a month—providing an inconsistent stored record, especially for born-digital content.

Historians have a crucial role to play in this transition.

The Chicago Defender encapsulates these emerging problems with newspaper access. The paper, perhaps the most important Black paper in the United States, announced that it would no longer produce a printed edition in the summer of 2019. Begun in 1905, the Defender can be found in the microfilm cabinets of many libraries, and its importance as a paper resulted in the Defender anchoring the ProQuestHistorical Newspapers: Black Newspapers digital collection. When the paper announced that all future content would appear online only, it made national news because of the paper’s importance and changes to the newspaper industry. What didn’t make the news, but which concerned librarians across the country, was the sudden end of over 100 years of library access. An online paper cannot be microfilmed, and the archive on the Defender’s website provides access to print content via products available from ProQuest. The Defender did not immediately offer plans for how or if born-digital content will be preserved and made accessible for the future in a more stable location than its website. In 30 years, when a researcher wants to learn how COVID affected Chicago’s Black population, they may not be able to turn to the Defender for the answer.

Historians have a crucial role to play in this transition. Scholars should no longer assume that a local, regional, or national newspaper will be accessible at a library or through interlibrary loan. It is important that historians reach out to their librarians to find out how they are dealing with these shifts. Talk to them about the local or national papers that are important to explaining life in 2021.

We—librarians, historians, and even journalists—cannot afford to become siloed in our individual professions, organizations, or occupations. While we all have different needs in regard to newspapers, right now the power players are the publishers and vendors. Market forces more often decide access and archiving methods, which don’t always meet the needs of users. As users, we need to raise our voice. Concerned historians, librarians, and journalists should begin working together now to ensure that future scholars can access both former print and born-digital news content. Changes to newspaper collecting are the canary in a coal mine. The world of information access is rapidly changing, and we must work together to ensure that future historians can practice their craft.