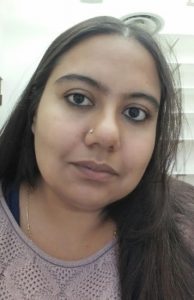 Describe your career path. What led you to where you are today? I think I knew from a very early age that I wanted to read as many books and be in as many libraries as I could. My mother, aunt, and grandmother were all teachers, and the way they spoke about the ethics and responsibilities of pedagogy and research also had a deep impact on me. I began my graduate research in Bible translations into Bengali in the early 19th century, but was soon entranced by the missionaries and their Indian interlocutors. I detected the development of a complex relationship of overt repudiation and covert fascination, where Christianity was perceived as a religion and a philosophy, a discursive and dialectical category, a denominator of racial and social difference, and as a repository of Enlightenment ethos and modernity. In my dissertation, I investigate the ways in which this examination of Christianity represents a philosophical engagement, leading to contestation over the nature of political allegiances of the colonized subjects, in the Indian context.

What do you like the most about where you live and work? Being at Harvard has been an endless discovery of academic resources. I cannot even begin to express how delighted I was when I first realized that I could have as many books as I wanted from Widener library. Any time I thought of some resource that I required, the library staff made sure I had access to the material, no matter where it was in the world. Cambridge is beautiful with its fall colors and the white blanket of snow in winter. I have wonderful advisors and mentors, and a close group of friends who I shall look to for companionship, both emotional and intellectual, for the rest of my life!

What projects are you currently working on? I am currently engaged in writing and revising my dissertation, “Questions of Faith,” in preparation for submission. In my second project, I will think of travel in the Indian and Atlantic Ocean worlds, and Indians as imperial citizens and global flaneurs!

Have your interests evolved since graduation? If so, how? While I began research focusing on institutions and structural changes involved in the Indian transition from colonialism to nationalism, I realized I was interested in nonelite actors and their social and cultural networks, and what such networks could tell us about wider trends in macrohistory. My research has evolved from working with traditional elite archival sources to working with archival ephemera, much like a cold-case detective, thinking about what the historian Ranajit Guha once called “the small voice of history.”

What’s the most fascinating thing you’ve ever found at the archives or while doing research? In the Raymond Anti-Slavery Collections at the University of Manchester Library, I found the letters written by the abolitionist George Thompson to his daughter, detailing his trip to Calcutta in 1856. The letters contained detailed references to two major figures in my dissertation, and that was very exciting, as it changed my story about conversion to Christianity in colonial Calcutta!

What do you value most about the history discipline? The discipline provides us with the intellectual and moral ability to look past simple majoritarian narratives about otherness of strangers. It also trains us to sift through conflicting evidences to come close to the truth, inasmuch as that is possible.

Why is membership in the AHA important to you? The AHA provides me membership in an extraordinary community of intellectual exchanges. The debates the AHA has fostered about the pedagogy of history and about the lives of historians, especially as female scholars, have been formative of my own understanding of how I want to fashion myself as an academic, an educator, and researcher.