Hollywood has not done well by historians of the revolutionary era—and yes, I speak of The Patriot. In that 2000 film, the British sank to such depths of evil that they herded dozens of innocent American women, children, and old men into a church, barred the door, and burned it down. Historians have spluttered about that scene ever since, for no such event occurred during the Revolution (rather, this was an infamous Nazi atrocity). Never mind: it helped motivate the heroic Mel Gibson, the Southern plantation owner whose loyal black field hands were all free (!), to kill scores of sadistic British soldiers while waving a flag. Thanks to the film’s ubiquity on basic cable during their formative years, students rarely question its ideological cant.

“It’s not just that so much of The Patriot is inaccurate and downright offensive, or that its morality is so black and white,” I tried to tell my students last semester. “It’s that the film avoids what is actually interesting about the Revolution.” They looked at me, as they do, with quiet pity.

All the more reason to feel hopeful about the new TV series Turn, which takes as a given one of the most interesting facets of the Revolution: that it was in part a civil war between Americans who held conflicting ideas about British rule. At a press conference in February in Richmond, Virginia, where much of the filming takes place, executive producer and showrunner Craig Silverstein detailed the show’s emphasis on the moral complexities of the era. “It was a kind of wild and unruly time and was not as flute-and-drum” as some might have it, he explained. This show, he promised, would be no “museum piece.” Indeed, by focusing on members of the Culper Ring of spies who reported on movements by the British Army, the series shows that many of those individuals embedded themselves in British-occupied communities and publicly proclaimed their loyalty to the king in order to maintain the trust of loyalist neighbors or families.

Sure, Turn takes liberties with chronology and motivation, but it also draws heavily from Alexander Rose’s compulsively readable Washington’s Spies: The Story of America’s First Spy Ring (2006) in developing its main story. The series revolves around three historical figures who grew up as childhood friends in the Long Island town of Setauket, an area occupied by the British shortly after the war began. It finds most of its drama in the person of Abraham Woodhull (British actor Jamie Bell), a farmer and reluctant revolutionary whose wife and young son give him good reasons to stay far away from politics or action. The show’s writers invented for Woodhull a strongly loyalist father who works closely with the British to maintain order in the community; for additional tension, they also granted him a romantic backstory with the wife of the community’s leading American sympathizer. In contrast to his old friends Benjamin Tallmadge and Caleb Brewster, who decamped across Long Island Sound to join Washington’s Continental Army, Woodhull remained in Setauket and, as the show would have it, displayed a Cincinnatus-like hesitance to leave his farm or choose sides. The season’s 90-minute pilot traces the efforts of Tallmadge and Brewster to recruit Woodhull, and his romantic/ideological motivations for agreeing.

The show’s focus on the bonds between comparatively unknown men like Woodhull, Tallmadge, and Brewster heightens the drama. Washington’s Spies begins with the famous Nathan Hale, who was executed by the British in September 1776 while on a failed spy mission (and who did not, in fact, say, “I regret I have but one life to give for my country”). In contrast, the series opens at roughly the same point in time, but portrays the Americans as the duped targets of successful British spies. Having seen all his compatriots killed in an ambush by the mercenary Queen’s Rangers, led by Robert Rogers, Tallmadge pleads with General Washington to mount an effective intelligence campaign. The pilot’s central tension thus circulates around the revolutionaries’ desperate need to turn the tide of the war in their favor. Silverstein reserves ample material for subsequent seasons, including the tale of Benedict Arnold, who switched sides in 1779.

Turn is not The Patriot, but if the pilot is a fair indication of the series as a whole, neither does it reach the subtle narrative heights of Mad Men. It may capture the complexity of identifications experienced by many American colonists in a world divided between Whigs and Tories, but it refuses to leave viewers’ loyalties to chance. British soldiers in secondary roles run the gamut from Drunken Bully to Menacing Would-Be Rapist; with their powdered wigs and posh accents, they may not rise to the Nazi-like malice of those in The Patriot, but they nevertheless guarantee that no one will miss the pro-American thrust behind the show. The character of Robert Rogers (Angus Macfadyen) shows more promise. The American-born Rogers, who had been celebrated as an American hero for his exploits during the French and Indian War, here appears older and bolstered by a long career of heavy drinking that only makes him more feral in battle against the Patriots. 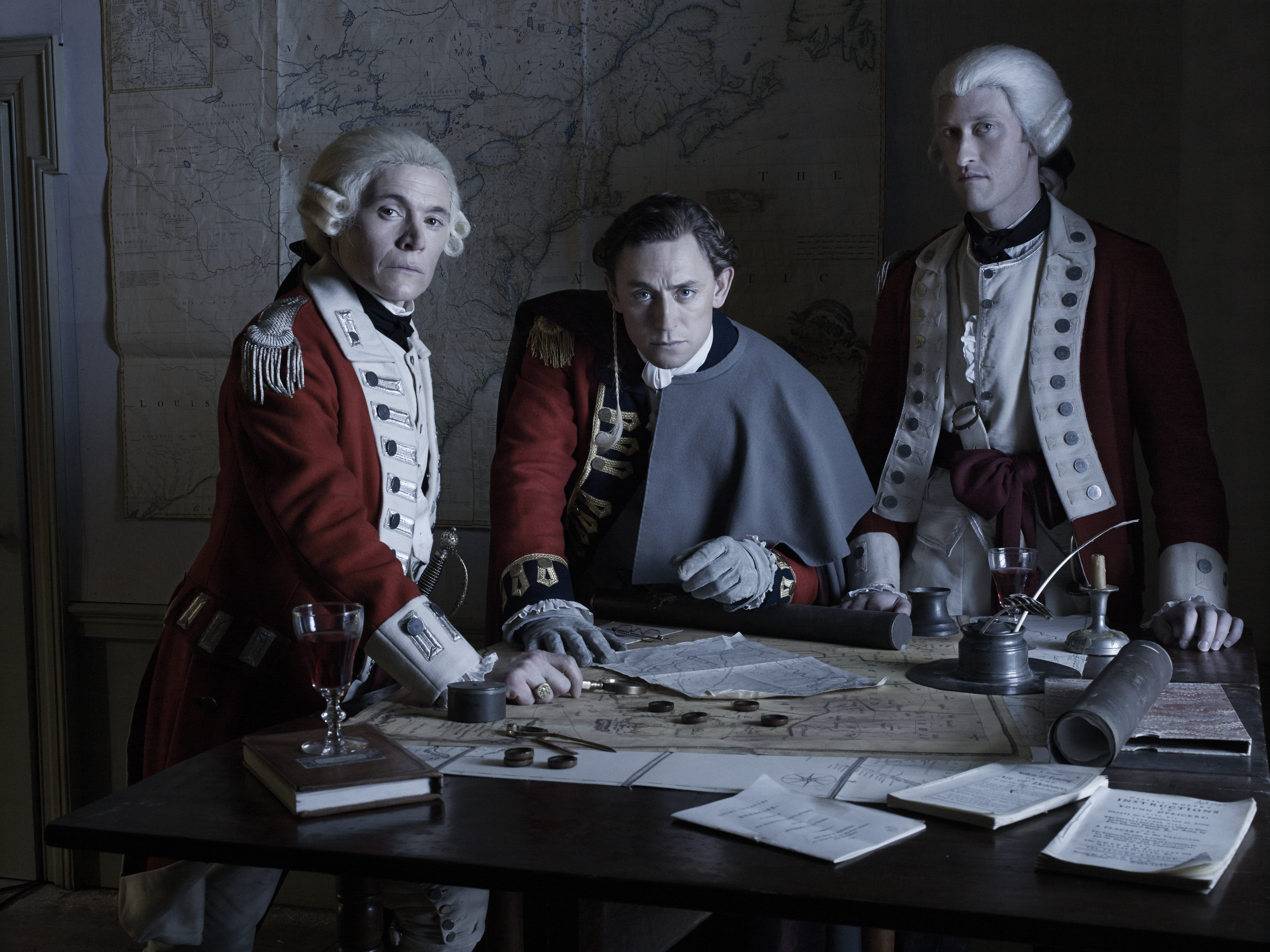 But let’s not be small about the show’s creative choices. Taken together, the action, gee-whiz historical spy craft, and emotional drama of this series raise the question of why it took so long for someone to transform Rose’s research into a show. In addition, the producers made the satisfying decision to cast a range of very fine actors who appear less like supermodels and more plausibly like simply very good-looking ordinary people. The show’s one gesture to hooking female viewers might come in the clean-shaven form of Seth Numrich as Tallmadge, who gets his shirt off at the beginning of the pilot and looks nothing like the historical Tallmadge as Rose describes him, “with a prominent nose, a somewhat bulbous forehead, and a disconcerting habit of cocking his head like a quizzical beagle.”1 It remains to be seen whether any of the numerous enslaved people portrayed in the first episode will rise to become full-fledged characters in their own right.

Building on the successes of other prestige dramas like Mad Men and Breaking Bad, AMC clearly dedicated its resources to high production values. “We didn’t really pitch it to a lot of places,” Silverstein explained to the Richmond press corps in February, describing an impressively speedy acceptance. “AMC wanted to do it.” The show hired renowned costume designer Donna Zakowska, who received Costume Designer Guild and Emmy Awards for her work on HBO’s series John Adams (2008), and who has marshaled costume resources from London and New York, as well as a small army of art and design students from central Virginia, to help. Alexander Rose serves as a historical consultant for the show, ­providing the writers with a long list of historical resources that includes Francis Grose’s 1785 publication A Classical Dictionary of the Vulgar Tongue, which, in entertaining fashion, claims to glean its authority from such linguistic experts as “soldiers on the long march, seamen at the cap-stern, ladies disposing of their fish,” and “various choice flowers . . . collected at executions.”2 Using Grose’s book, Silverstein explained, permits the show to feature far more cursing than might otherwise be permitted by the Federal Communications Commission.

And on the topic of language, the creators of Turn made a striking decision regarding the actors’ accents. With only a few exceptions, cast members in American roles have committed to a hybrid accent that sounds vaguely Irish. This choice reflects historical linguistic research that shows that most Britons and American colonists of the era used a rhotic style of pronunciation (that is, they pronounced the hard r in words like hard). Only gradually during the 18th century did elites and some middling people in the south of England shift to a non-rhotic pronunciation (hahd) as one way to distinguish themselves by class.3 The show’s unusual choice about accents thus has the nice effect of blurring clear lines of identification between British, patriot, and loyalist characters, for they sound similar—as they might have at the time. Yet this decision is ­undermined by the show’s British redcoat-wearing bad guys, who invariably commit to the non-rhotic Received Pronunciation—perhaps because they lack mustaches to twirl.

If Turn’s commitment to historical and moral complexity falls short of absolute, the subject matter of espionage and the blurry definitions of “loyalty” and “treason” nevertheless promise to provide far more of what was truly interesting about the Revolution. Rose’s book offers any number of sexy plot developments, including innovations in invisible ink technology, shadowy couriers, female spies, and the arrival of “gentleman spy” Major John André. With facts this delicious, the show offers ample reasons to leave the fictions of The Patriot behind us.

Carolyn Eastman is associate professor of history at Virginia Commonwealth University and author of the prizewinning A Nation of Speechifiers: Making an American Public after the Revolution.