Icon of the Crucifixion at the Getty Villa

In the May 2014 issue of Perspectives on History, we cover a major exhibition of Byzantine art that traveled to the National Gallery, is now at the Getty Villa, and will be at the Art Institute of Chicago in the fall. Below is a close look at one of the objects in the exhibit, Andreas Pavias’s Icon of the Crucifixion. By understanding the symbolism of this icon, the historian acquires a language. When examining  older, contemporary and later artistic depictions, the viewer will notice that certain elements are missing, and others added. These elements betray the historical moment of the work, and the background of the artist. 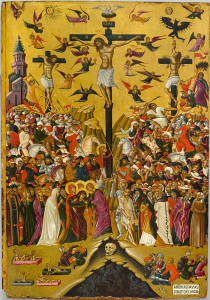 Made in the second half of the 15th century, this icon is on loan from the Alexandros Soutzos Museum, Athens, and will be at the Getty Villa in Los Angeles through August 25. As part of the exhibit “Heaven and Earth: Art of Byzantium from Greek Collections,” Pavias’s work is one of several magnificent icons that have been loaned from Greek collections.

In his New York Times article, “Social Media, the Spiritual Version,” Holland Cotter writes, “Icons weren’t just objects, nor were they art, as we understand the term. They were living, interactive entities wired into the world. In a way, they functioned as a spiritual version of social media, connecting and channeling energies among scattered, friendly and largely invisible parties, earthly and celestial. Relationships with icons could also be hands-on personal. Approached with an ardent, trusting spirit, they listened to you, looked at you, took you in. Because they had invigorating properties, you touched them, kissed them, coddled them. You asked favors of them: please give this, protect me from that. And if the favors weren’t granted, you could scold them, temporarily unfriend them. That was allowed. They were companions, guardians and courts of last resort.”

In a phone conversation, professor of religion Susan Ashbrook Harvey, who specializes in early Christianity and Byzantine traditions, shared her interpretation of the icon depicting the suffering of Jesus at the cross. 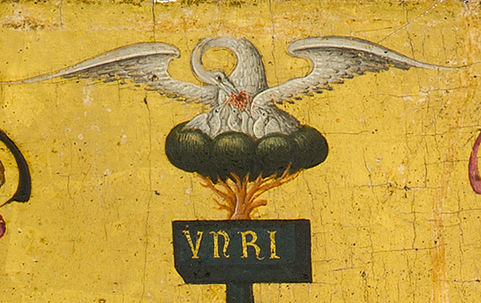 Harvey explained that at the top of the icon, above the cross, the pelican refers to a pre-Christian legend from ancient Greece. In the second-century Christian work called the Physiologus, the Alexandrian author allegorizes Greek legends, some perhaps taken from Aesop’s Fables. The pelican is often associated with Christ in medieval imagery, because in times when food is scarce, the pelican was thought to feed her own blood to her children to keep them alive. The pelican then dies. 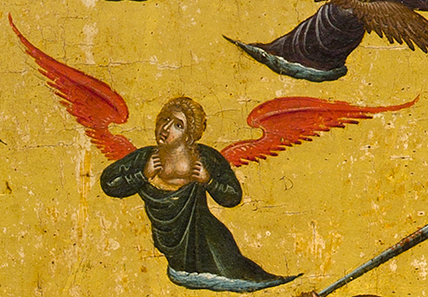 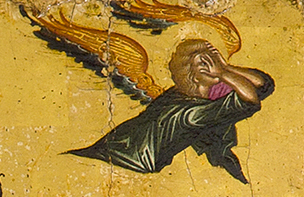 The angels in the icon are in traditional stances of mourning. They rend their clothes, weep and cover their faces.

These angels catch the blood of Jesus in communion chalices for the Eucharist, in reference to 1 Corinthians 11: “This is my body, which is for you.” Harvey also points to John 6: “Whoever eats my flesh and drinks my blood remains in me, and I in them.” 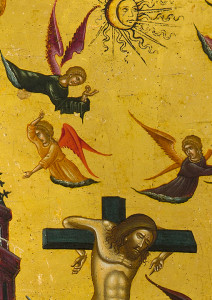 An angel carries the soul of the thief who accepts Christ as God. 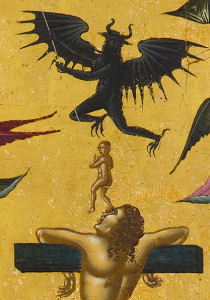 A demon spears the soul of the thief who mocks Christ.

Judas hangs himself after betraying Jesus for thirty pieces of silver. This account appears only in the Gospel of Matthew. 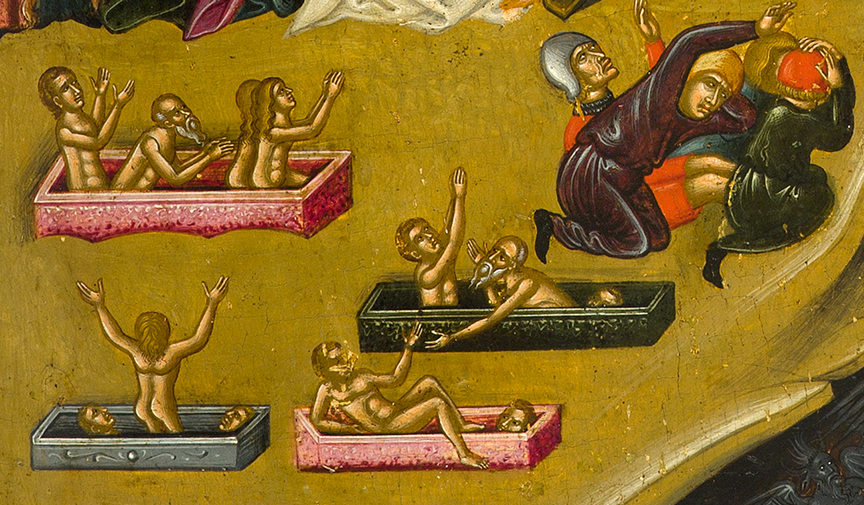 In the lower half of the icon, the dead rise out of their tombs at the moment that Christ dies on the cross. The soldiers next to them cower in fear. 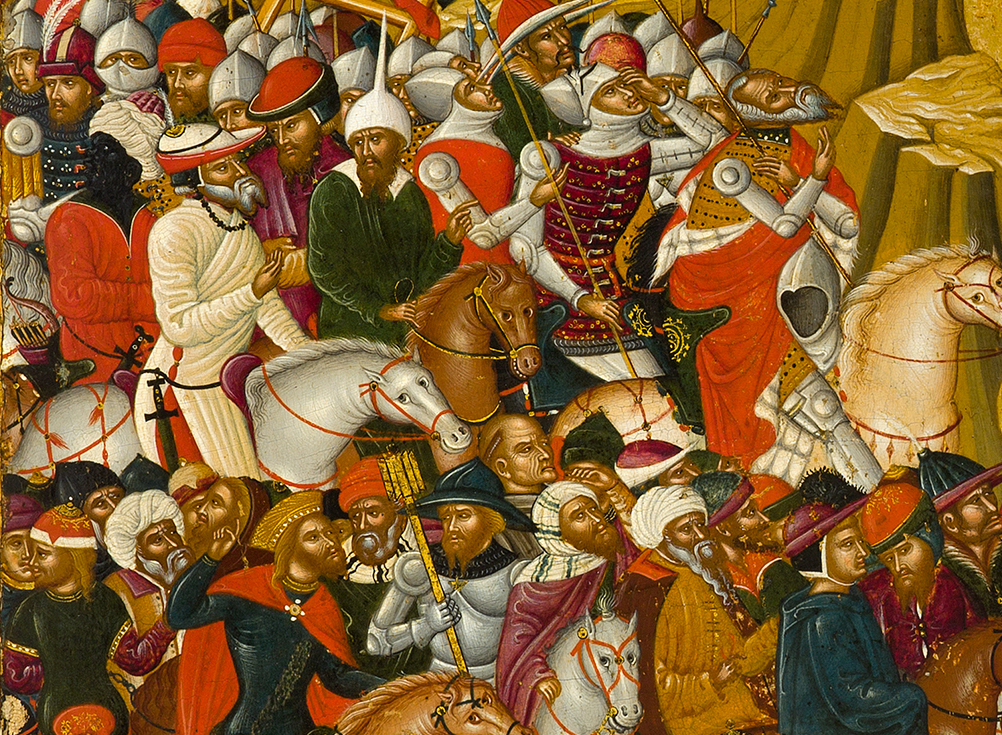 The men in the crowd wear different kinds of hats, indicating that Roman soldiers and ordinary people of different social classes and ethnic groups were present. The crowd is anachronistic, but the painter might have imagined all of the people depicted being in Jerusalem, either in his time or in the time of Jesus’s crucifixion. 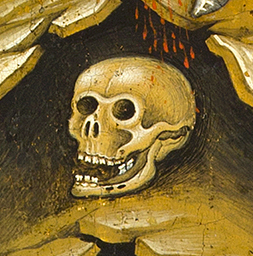 The skull at the bottom of the cross is known as the Skull of Golgotha. Golgotha means the place of the skull. In Christian tradition that skull is the skull of Adam, who was also the first human being to die. Christ is called the second Adam by the apostle Paul. The blood dripping down on the skull will bring Adam to life, and along with him everyone else.

To learn about the historical context of this icon, read “Layers of Culture” in the May issue of Perspectives on History.