The April 2011 issue of the American Historical Review should soon be in members’ mailboxes. It includes a forum on “The Senses in History” and an article on narcotics trafficking and territoriality in the interwar Middle East. Three featured reviews are followed by our usual extensive book review section.

In “The Many Worlds of ‘Abud Yasin; or, What Narcotics Trafficking in the Interwar Middle East Can Tell Us about Territorialization,” Cyrus Schayegh examines specific spaces to elucidate the multiple geographic scales—local, national, transnational, and international—in play in narcotics trafficking in the post-Ottoman Levant. From a historical standpoint, this focus helps us better understand the competing forms of territorialization pursued by different historical actors in new Mandate Lebanon, Syria, Palestine, and Transjordan, especially the constraints experienced by French and British officials in an increasingly treacherous colonial state of affairs.

From a conceptual standpoint, it enables us to avoid unhelpfully reductive oppositions between geographic scales—such as “the global” versus “the local”—and to avoid inflating the significance of the nation-state. By emphasizing territorialization, Schayegh highlights historical actors and processes that tend to be overlooked when primacy is given to the nation-state or the global.

The AHR Forum features six articles on the five canonical human senses. In an introductory essay, Martin Jay places the study of the senses at the unstable crossroads between corporeality and meaning, nature and culture. He argues that the discipline of history is better positioned than neuroscience and cognitive psychology to study the discursive differentiation and ranking of the senses, their impairment, and their enhancement, and to investigate the relationship between hegemonic cultural assumptions about the senses and actual material and corporeal practices of a place and time. While the senses are now often studied individually, this forum juxtaposes current research in each of the traditional senses, to put such work in greater dialogue and to bring new work in “sensory history” to the attention of historians generally.

In “On Being Heard: A Case for Paying Attention to the Historical Ear,” Sophia Rosenfeld focuses on the history of sound and audition in Europe and its colonies since the early 17th century, an area in which historical research has achieved sufficient density to be able to generate a synthetic narrative. The centerpiece of her essay is a consideration of the effects of the French Revolution, when the newly regained right to free speech led to a reciprocal need to be heard—which could, she argues, itself be a battlefield. She thereby connects the history of hearing to central issues of modern European political history.

In “Follow Your Nose? Smell, Smelling, and Their Histories,” Mark S. R. Jenner rejects the teleology and stereotyping embedded in an association of modernity with deodorization. A narrative that lodges smells in a primitive past or in contemporary poverty does not help us appreciate either the modern generation of smells (fair and foul) or the complexity of smellscapes deserving careful historical analysis. Jenner also rightly demands conceptual care in avoiding culture/nature and human/environment dichotomies. These domains must be permeable, and the senses must be viewed as operating in conjunction, if we are to investigate the totality of bodily techniques in various historical moments.

Facing the impossible task of encapsulating the overwhelming amount of historical research on visuality and visual culture, Jessica Riskin delves instead into an intellectual history of the eye, significantly as rendered distinct from vision by English, British, and European intellectuals in the 17th to the 19th centuries. This distinction was purposeful, making it possible to characterize the eye’s mechanistic properties to suit theological agendas. “The Divine Optician” demonstrates how mechanistic principles were associated not only with science but with theology in Britain and Europe well into the 19th century.

Priscilla Parkhurst Ferguson considers “The Senses of Taste,” which she says were primarily corporeal until scientific and aesthetic determinations of “taste” emerged in Europe in the 18th century. Taste was thereby decorporealized, turned into a means of judging individuals and groups and signifying the contested terms of personal status, collective identity, and social order. Not only foodways but cookbooks and other representations of food changed over time, and should thus be made subject to historical analysis.

Elizabeth D. Harvey meditates on “The Portal of Touch” mainly through a singular example, the collaboratively produced painting The Allegory of Touch (1617) by Peter Paul Rubens and Jan Brueghel the Elder. She begins with Plato and moves into Renaissance print and visual culture before engaging in a close analysis of an emblematic artwork. Among the intellectual elite in Renaissance Europe, human skin and the sense of touch involved both boundedness and permeability.

The June issue of the American Historical Review will include a roundtable on “Historians and the Question of ‘Modernity.’” 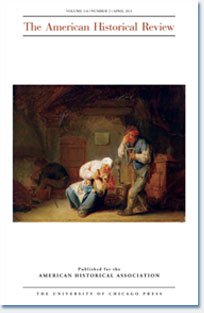 Adriaen van Ostade, The Sense of Smell (1635). A popular Dutch painter of peasant life, Van Ostade was one of the many artists who have allegorized the traditional five senses. But while hearing, sight, smell, taste, and touch have served as a frequent source of inspiration over the centuries for those in the arts, historians were slower to “come to their senses.” There has been a proliferation of work in sensory history in recent years, and the six contributors to the AHR Forum in this issue have taken different approaches in placing “The Senses in History” in their respective fields. In their essays they explore how the senses have been understood historically and reflect on the state of this still-developing field. Oil on panel. State Hermitage Museum, St. Petersburg, Russia.