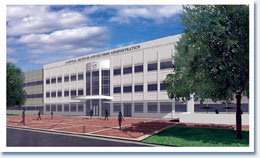 The National Personnel Records Center (NPRC) of the National Archives and Records Administration (NARA), located at St. Louis, Missouri, is moving more than 100 million records, which occupy 2.3 million cubic feet of shelf space, to a new $112 million facility. The building will open its doors in May 2011, when the workforce of 800 will start moving in. The entire move of personnel and records will take about 17 months.

The new location will store records currently housed at three different St. Louis area facilities. The building will be certified under the Leadership in Energy and Environment Design (LEED) program and will be compliant with the stringent federal standards for archival and non-archival records. Records will be housed in climate-controlled storage areas designed for long-term preservation. The facility will also have new research rooms, meeting rooms equipped with video-conferencing technology, and office space for other area federal agencies.

Several teams are working to ensure that every record is accounted for when moved and that NPRC’s important services to veterans continue without interruption. Many of the records are currently stored in a 1950’s facility at 9700 Page Avenue in Overland, Missouri. In 1973, a fire, one of the worst in U.S. history, ravaged this location and destroyed the building’s sixth floor and an estimated 16–18 million individual military personnel records. However, some records were salvaged from the disaster; these burned files are carefully stored and protected, so the data they contain can be retrieved.

The NPRC holdings are primarily the personnel records of former Federal personnel, both military and civilian. These records can be divided into two categories: those to which access is restricted, and those that are open to the public.

The Department of Defense and the military service departments are the legal owners of military personnel records prior to transfer of legal ownership to the National Archives. Limited information from these records is releasable to the public without the permission of the subject of the record. These are the records to which access is restricted. However, ownership of the military personnel records transfers to NARA 62-years after a veteran’s separation from service (by discharge, retirement, or death). When this occurs, NARA has the authority to open these records to the public. These records are referred to as archival records.

Other archival records include certain civilian personnel records that document federal government service prior to 1952; Selective Service System records; and the records of “Persons of Exceptional Prominence” (PEP). These PEP records include the files documenting military and civilian service of prominent persons, including former presidents of the United States, members of Congress, other government officials, military leaders and combat heroes, explorers, scientists, artists, authors, musicians, entertainers, and sports figures. A digitization project is currently underway to make some of these records available on CDs for a fee.

The NPRC is one of several NARA facilities in regions located throughout the United States. Unlike other collections, the records held in St. Louis have significance to nearly every family in the United States. “Just about everyone has a relative who either served in the military or has been employed by the federal government,” Bryan McGraw, assistant director for archival programs explained. These priceless records are a critical source of information for genealogists, family members, scholars, and researchers in many fields of knowledge. The new building is expected to attract a new audience to holdings that have not received a lot of attention in past years. For more information go to archives.gov.

Wanda Williams is an archivist in the Archival Programs Division of the National Archives and Records Administration, and is based at NARA’s St Louis, Missouri, office.