The Walls of Troy

Exclusion and Community in a Pandemic

The built environment clarifies social roles and relations . . . in the absence of books and formal instruction, architecture is a key to comprehending reality.

My first in-person year at the University of Southern California (USC) was largely defined by navigating COVID protocols. Like most universities, USC Student Health required all students to submit their vaccine (COVID and flu) and booster information to our student health website. Additionally, all 50,000 students were required to test every 7 days. Test and vaccination information was linked to a symptom check through USC’s Trojan Check phone app, which determined if a student was in compliance with the university’s COVID protocols. Compliant students received a unique QR code to present to USC “Security Ambassadors” (private security guards hired to patrol a 2.5-mile radius around campus) at one of the four open checkpoints, the only points where students, faculty, staff, and visitors could enter campus. Merely getting onto campus was a multistep process that led to 8 a.m. frustration for those of us who hit snooze one too many times. 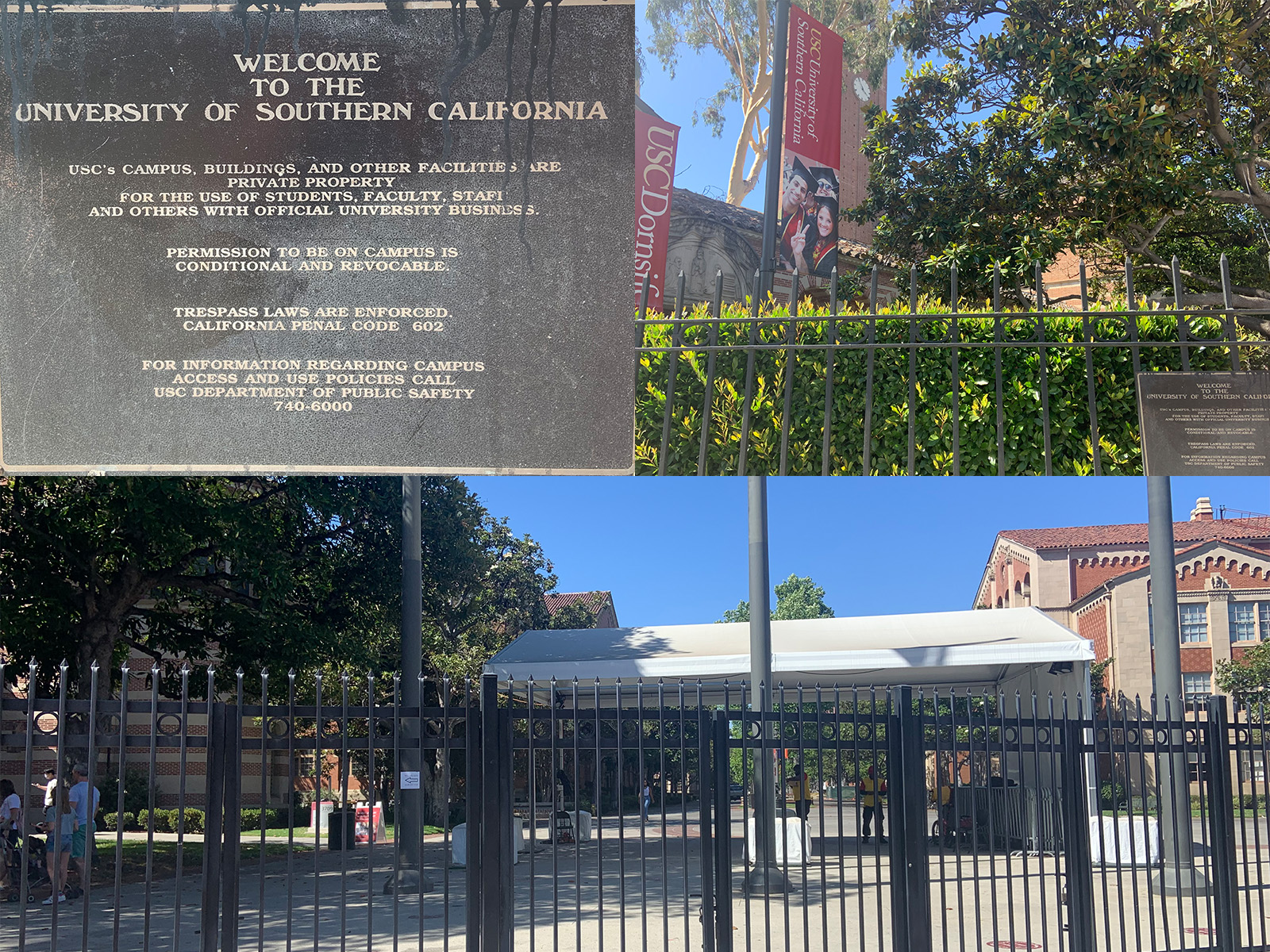 The Wall of Troy, as seen from the University of Southern California Exposition Park Entrance. Arabella Delgado

This became routine: updating Trojan Check, daily symptom checks, swabbing my nose once a week, and being herded through the campus’s entrance along with all the other students trying to make it to class on time. Monitoring, restriction, and the exclusion of community members felt normal. It created a campus visibly separated from the world around it, a place where students had access to resources like quick and easy testing that the broader city of Los Angeles did not. Of course, this was all done in the name of public health. But while we all navigated this new normal, it was hard to ignore the infrastructure that made this whole system possible. The perimeter walls and fencing around USC provided the exclusionary capabilities deemed necessary in a public health crisis, but they were erected long before COVID-19.

In March 1955, USC president Fred Fagg Jr. smiled as he crouched over a small pile of bricks laying on a wooden foundation. Trumpeters played in the background as students looked on and other university officials joined Fagg on the lawn for a photo. This moment, memorialized in the Los Angeles Examiner, marked the groundbreaking for the “Walls of Troy,” the fence and wall that eventually came to surround the entire perimeter of USC’s University Park campus in South Los Angeles.

Monitoring, restriction, and the exclusion of community members felt normal.

The purpose of the Walls of Troy was reflected in the 1960 Master Plan, which outlined USC’s next stage of development in South LA. As they moved into a new decade, the Board of Trustees sought to establish a campus with a distinct identity amid the increasing need for land and the “surrounding urban issues,” a phrase that alluded to the broader community’s predominantly Black population. The walls were just one, very noticeable way that USC became a distinct campus separate from the surrounding area. The privatization of public spaces, like University Avenue (now a pedestrian mall), was already underway. Architect William Pereira developed a cohesive landscape and architectural plan to reinforce a sense of place. The 1960 Master Plan and its 1966 revision created a campus that was distinct from the surrounding area while closing it off to those without institutional affiliation.

USC may have coded its exclusionary practices as institutional development, but South LA residents have always known the walls’ implicit purpose: to separate campus from the surrounding neighborhood. This became especially clear in the aftermath of the 1965 Watts rebellion. In response to the perceived dangers of the Black community, USC leadership considered uprooting campus and leaving South LA altogether. The campus ultimately stayed in its original location, but the proposed move signaled a sense of antagonism that the community could not ignore. In the 1970s, local pastor and activist Thomas Kilgore drew attention to the university’s failure to create ties to the community. He went as far as criticizing the lack of community outreach in his brief 1972 USC commencement speech. Kilgore did more than just highlight the issue; he pressured USC leaders into addressing their position in South LA and establishing a community relations office.

The campus ultimately stayed in its original location, but the proposed move signaled a sense of antagonism that the community could not ignore.

Establishing tenuous local ties, however, could not erase the university’s exclusionary history and infrastructure. When USC expanded community programming in response to the 1992 Los Angeles uprising, South LA residents remained wary of this outreach when their requests to use recreational facilities or become campus vendors were still met with silence. The subsequent opening of the walls was intended to mark a commitment to some level of inclusion. The Walls of Troy became relatively permeable, and students even successfully advocated for tearing down sections. In 2012, however, an on-campus shooting and off-campus murder shifted USC leadership’s perception of the surrounding community once again. South LA’s Black and Latinx residents were deemed an immediate danger to the university community. Previously removed sections of the walls were quickly re-established, with increased security, limited entrances, and required university ID checks. Local residents were no longer able to cut through campus or enjoy the impeccably maintained greenspace. Students started a petition to tear the walls down again, but a decade later they remain as a symbol of the precarious relationship between town and gown.

In the spring of 2022, I served as the teaching assistant for American Studies 101: Race and Class in Los Angeles. As a break from our normal discussion, I led students through my “alternative walking tour” of USC, which highlights the not-so-savory (a.k.a. racist) aspects of USC history. I concluded the tour at the Jefferson Street entrance, talking about what places like the Walls of Troy mean today. I asked, “What were you told about USC before you came here?” Most of them responded with “it’s dangerous” or “it’s in a bad neighborhood.” I proceeded to explain the history of the Walls of Troy, and I saw their faces light up with interest— the first time I had seen that response all semester. When I asked their thoughts at the end of my brief history lesson, everyone wanted to chime in. Suddenly, the walls were not just a normal part of everyday life the students never questioned. They became a subject of discussion—one in which I didn’t even have to interject.

My students’ responses reaffirmed why it’s important to discuss everyday places and the history they hold. The Walls of Troy are not simply fences that mark a campus; they are symbols of a deeper history of exclusion. This history, and students’ awareness of it, seemed to get lost in the COVID routine. Now, the walls are a means to keep the university community healthy. Despite this normalization, the Walls of Troy represent an exclusionary infrastructure that can be deployed whenever the university sees fit, whether that’s the perceived dangers of the surrounding areas or a global pandemic.

Arabella Delgado is a PhD student in American studies and ethnicity at the University of Southern California. She tweets @ArabellaDelgado.