Come Out! In Detroit

On June 24, 1972, a crowd of gay and lesbian people from across Michigan assembled in Detroit’s Cass Park. Over 400 marchers made their way from the park to Kennedy Square, carrying banners that proclaimed, “Full Civil Rights for Gay People” and “Repeal All Anti-Gay Laws.” The Christopher Street Detroit celebration—a reference to the location of the Stonewall Inn in New York City—was the first large public demonstration for gay and lesbian rights in Michigan. Until now, the event had nearly been forgotten. 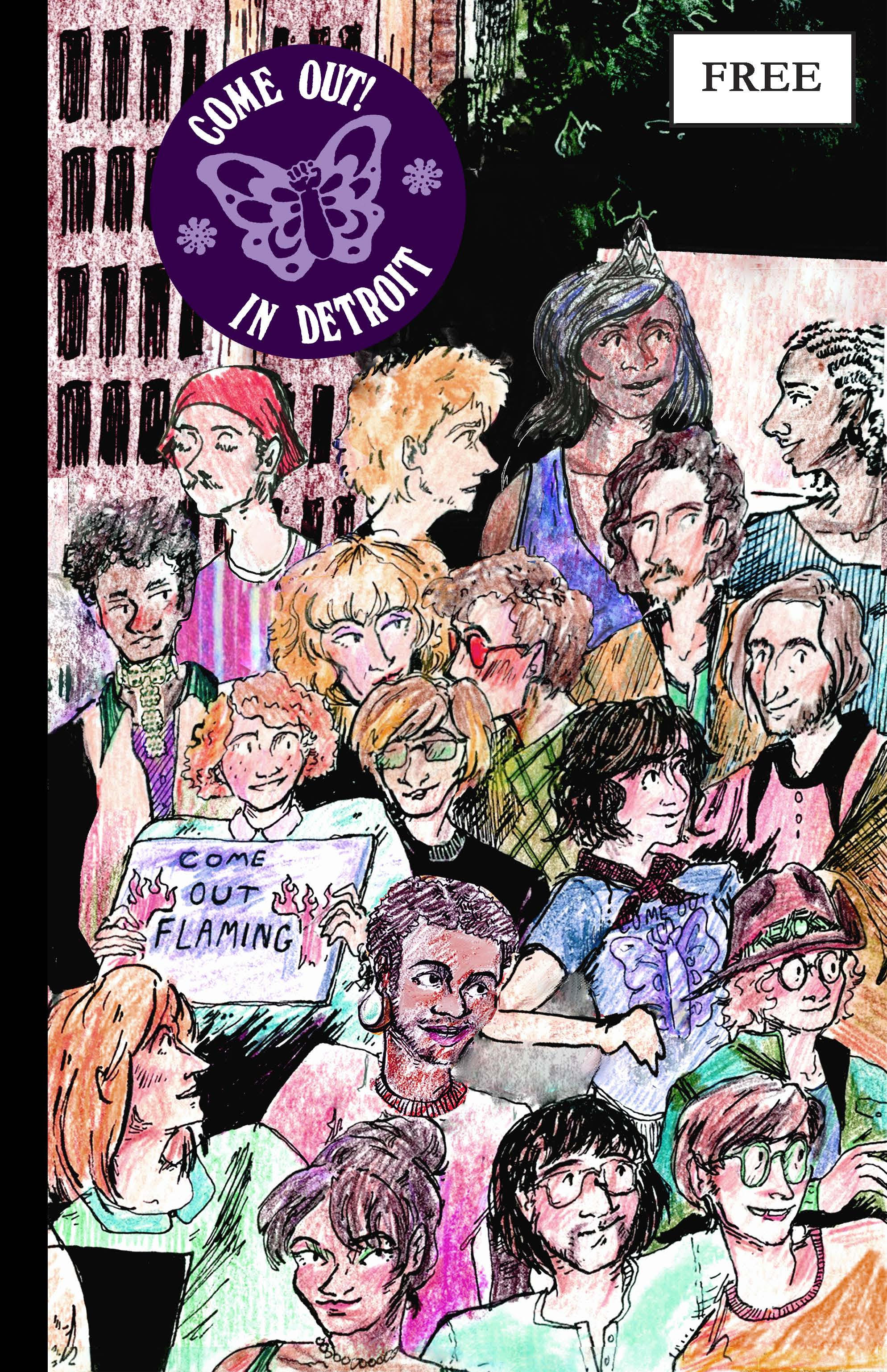 A labor of love and identity, Come Out! In Detroit provides a model for popular history. Tim Retzloff and Isabel Clare Paul

June marked the 50th anniversary of the march, and Tim Retzloff (Michigan State Univ.) was determined to bring the story of Christopher Street to the public. Joining forces with a freelance illustrator, he used the groundwork he had laid in researching his dissertation to create a comic book titled Come Out! In Detroit. The comic was released for free on May 7, National Free Comic Book Day, at bookstores across Michigan. It has since been profiled at the Motor City Comic Convention, and the Detroit Historical Museum is hosting a special exhibition about the comic this summer to celebrate Michigan’s 50th Pride. Receiving widespread community support and lauded as “a pioneering experiment” and “unique among archival based works in the history of Michigan,” Come Out! In Detroit is a model for new ways of bringing history to the broader public.

Tim knew he could write the narrative using his extensive research and oral history interviews with Michigan LGBTQ activists, but the artwork?

The idea of telling the story about Christopher Street in comic form came to Tim while he was in lockdown at the beginning of the COVID-19 pandemic. His dissertation and first book project focus on the academic history of postwar metropolitan Detroit’s LGBTQ communities, but he wanted to tell this story for the anniversary and reach a large public audience.

Trying to figure out where to begin, Tim discussed his idea with me over Zoom. As the editor and publisher of an independent lesbian-feminist literary journal, Sinister Wisdom, I provided ideas for finding a comic book printer and suggestions for crowdsourced fundraising. Before he could turn to these tasks, however, he first needed to create the comic. Tim knew he could write the narrative using his extensive research and oral history interviews with Michigan LGBTQ activists, but the artwork? For that, he needed a collaborator. 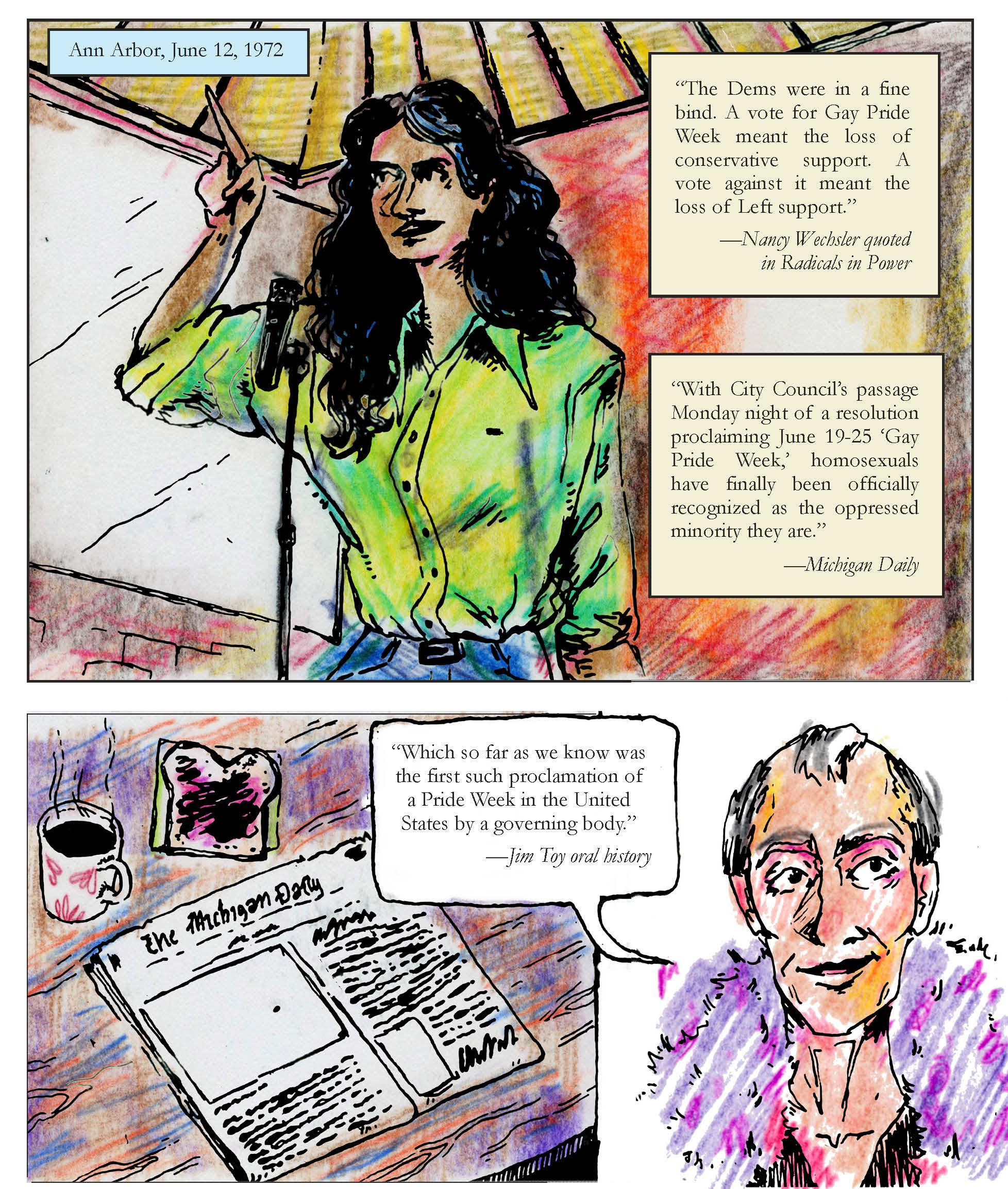 Enter Isabel Clare Paul, a recent graduate of Detroit’s College of Creative Studies. Living with her parents after graduation, she was trying to launch her own career as an illustrator and graphic artist in this “unpredictable time.” Isabel’s parents were Tim’s close friends—they had grown up together in Flint—and she was eager to partner on the project. A first hurdle had been cleared.

To write the comic script, Tim stitched together quotations from news sources, activist newsletters, two diaries, and oral history interviews to form a narrative entirely from eyewitness accounts. Using the narrative alongside photographs of the period and other archival sources, Isabel and Tim created story boards, plotting the pages of the comic and narrative trajectory. The two also visited people and locations portrayed in the story. One of the largest challenges was concision: Tim’s dissertation weighed in at 150,000 words, and the comic’s text is less than 3,000 words. For Tim, distilling the text was aided by the collaboration with Isabel. Having lived in Detroit as a student, Isabel tried to meld the Detroit she knew with the one described in Tim’s sources. Tim credits Isabel with “bringing it to life in ways that the text alone would not have done.” Isabel also offered new insights, noticing, for example, that someone in an archival photograph was wearing a t-shirt that read “super queer.” According to Tim, “We are under the impression that the word [queer] didn’t get reclaimed until the late 80s and early 90s, but this is an indication that some people were reclaiming it much earlier.” The final result of all this careful work was a 32-page comic book.

Creating the graphic history was one part of the work. Next came a bigger challenge: free distribution of a large number of comic books. Tim wanted to distribute copies to LGBT community centers, public libraries, bookstores, and bars, as well as to Michigan Pride attendees during the 50th anniversary in order to reach a broad readership, both LGBTQ+ and not. Tim estimated a budget of $31,000 was needed to print 20,000 copies and to pay Isabel and himself. Historians, after all, need to be paid for their labor. 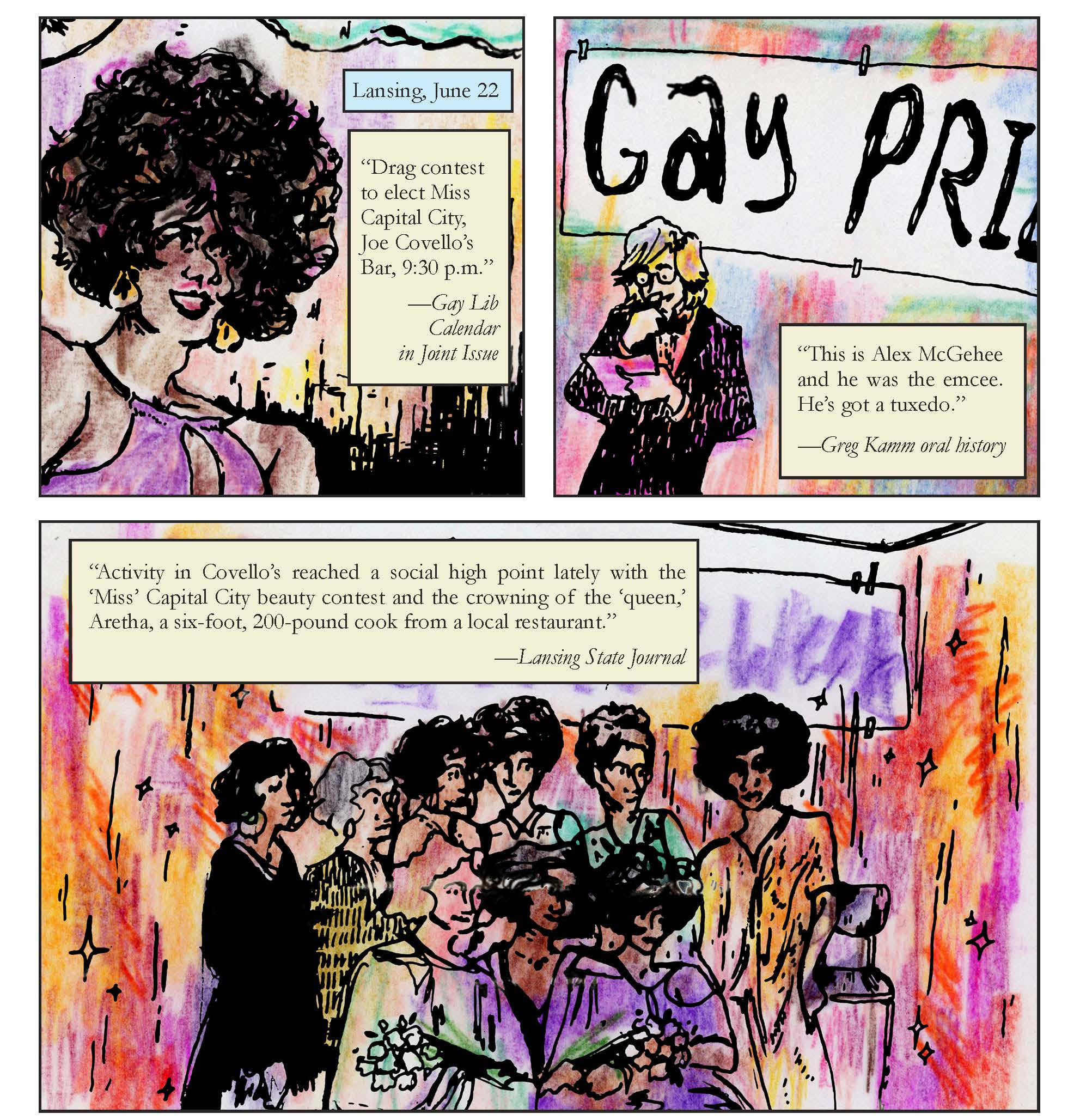 Tim then turned to fundraising. In the fall of 2021, a handful of supporters provided seed money, including in-kind gifts. Early support helped garner a $15,000 grant from Michigan Humanities, an affiliate of the National Endowment for the Humanities. The remaining balance came through a GoFundMe campaign that raised $6,875. To manage the money, Tim relied on the local service and advocacy organization, LGBT Detroit, to serve as nonprofit fiduciary.

In addition to securing funding, Tim ensured that the comic would have a wide and enthusiastic audience by organizing institutional partners to support and promote it. Partner institutions include the Labadie Collection at the University of Michigan, Steven O. Murray and Keelung Hong Special Collections at Michigan State University, the Bentley Historical Library, the Detroit Historical Museum, and the Walter B. Reuther Library at Wayne State University. This constitutes an unprecedented gathering of major Michigan historical institutions to support queer history, and it includes the three key campuses whose students were involved in Christopher Street Detroit ’72. This partnership also highlights collecting institutions to Michigan LGBTQ communities. Tim explains that these institutions are “where people can go to find their history” and also “where people can go to save their history.”

Historians, after all, need to be paid for their labor.

Come Out! In Detroit went to print in March, and the printer delivered 23,000 copies—five pallets of comic books bundled in boxes of 170 and weighing more than 5,000 pounds—in April. Tim and Isabel with some volunteers brought bundles of the comic to events and locations around Michigan for distribution in time for Free Comic Book Day in May and other events in June.

Tim’s work represents the dividends of a lifetime of living, researching, and working in the community and demonstrates the resiliency of one trained historian. Like many, Tim has not secured a traditional academic job, but he persists with writing the histories that originally inspired him and continue to animate his work today. One point of satisfaction is recognizing real individuals in the comic. He notes that “of the two dozen named people in the comic, ten of them have died. So it really gives voice to a history.”

For Tim and Isabel, graphic history—a loftier term for comic books—is an economical form for public history. Tim explains that creating a comic book “doesn’t require the budget of a documentary” film and reaches a broader audience than scholarly articles or even articles in popular magazines. When Tim and Isabel shared an early copy of the comic with surviving activists from the period, these activists described the comic as a “keepsake,” like a Christopher Radko ornament or vacation postcards. The idea that readers might hold on to Come Out! In Detroit and revisit its story again and again is the project’s greatest reward.

Julie R. Enszer is instructional assistant professor of gender studies for the Sarah Isom Center for Women and Gender Studies at the University of Mississippi. She tweets @JulieREnszer.