During a truly dispiriting news cycle, it was easy this spring to overlook NASA’s successful launch of two American astronauts into orbit. It was the first such mission using US facilities and technology since 2011, when the Space Shuttle Program ended more with a whimper than a bang. On May 30, a Falcon 9 rocket engineered by SpaceX sent Robert Behnken and Douglas Hurley hurtling toward the International Space Station; their Crew Dragon capsule docked uneventfully less than a day later. Those not too distracted to notice had found something to celebrate. 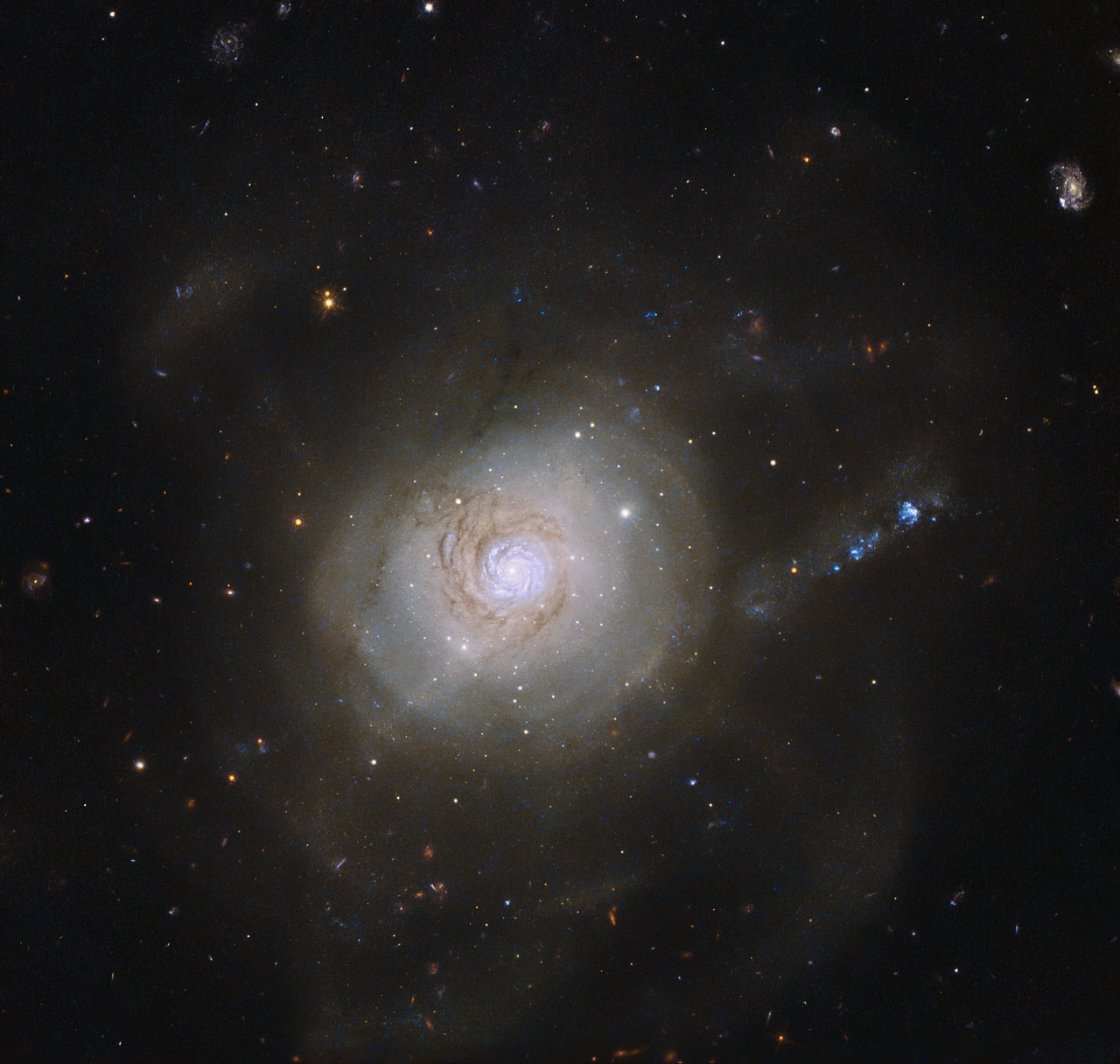 The Atoms for Peace galaxy is named after a 1953 speech by President Dwight D. Eisenhower. In the midst of the Cold War, Eisenhower advocated for peaceful uses of nuclear power. NASA.

Amid both the coronavirus pandemic and nationwide protests sparked by the murder of George Floyd, Donald Trump trekked to Kennedy Space Center in Cape Canaveral to witness the occasion. In a post-launch speech, Trump touted this mission as a portent for American weapons development waiting just over the horizon. Promising that NASA astronauts would soon land on Mars, he alluded to US production of “the greatest weapons ever imagined in history.” “I’ve already seen the designs,” he crooned, “and even I can’t believe it.” The reference was brief, but consistent with a pattern of the president’s public statements concerning both space technology and the medium of space, which he considers a “war-fighting domain.”

Contrast Trump’s vision for the space future—not markedly different from George W. Bush–era ambitions for “full spectrum dominance”—with a tide of commentary in newspapers, among peace activists, and even in some corners of the defense establishment that regards space not as “the ultimate high ground” but instead a vast, apolitical sanctuary that governments should preserve from weapons, warfare, and national rivalry. A broad swath of both popular opinion and professional analysis views the militarization of the cosmos as a catalyst for a new arms race, one that threatens the space-based infrastructure—including satellites for communications, navigation, e-commerce, and resource management, just to name a few—upon which modern life has come quite literally to depend. While many of us huddle in quarantine, a battle for the soul of American space policy is ratcheting up.

This struggle goes back more than a century, predating the space age itself.

As my dissertation reveals, this struggle goes back more than a century, predating the space age itself. When rocket engineers and spaceflight boosters began to speculate about the feasibility of human space travel in the 1920s, they did so equipped with a number of moral and ethical convictions about the proper use of the cosmos. Science fiction authors and philosophers envisioned space exploration as a “safety valve” for humanity’s aggressive and pioneering instincts. They viewed the Moon and distant planets as sites for the evolution of homo sapiens into a more egalitarian and magnanimous species. Most immediately, they foresaw a reformation of international relations based on space technology. Satellite communications would link disparate cultures, global television would bring education to rural backwaters, and sensors in space would monitor arms control agreements and build trust. From these prognostications flowed beliefs about the necessity of preventing the poisons of human history—war, imperialism, jingoism, and unbridled corporatism—from infecting “the ocean of peace.”

This collection of ideas, what later observers would term the “sanctuary doctrine,” did not advance unchallenged. The Soviet Union’s successful launch of the world’s first satellite in October 1957 convinced many Americans, chiefly its military leadership, that the United States needed to militarize the space environment swiftly so as to protect it from the Kremlin’s more nefarious intentions. In light of fantastic Soviet accomplishments in space, the secrecy of the USSR’s space program, and the housing of that program in a labyrinthine military bureaucracy, many in the Pentagon, particularly the Air Force, considered it vital to control outer space as a platform from which to enforce American military preponderance. Thus began advanced research into lunar bases, space planes, and satellite bombardment, detailed analyses of coming “space wars,” and the testing of nuclear weapons at orbital altitudes.

The successes of the first generation of space policy makers provide a template for those wishing to curb the militarization of space in our own, increasingly perilous moment.

But by the end of the 1960s, the sanctuary builders seemed to have won out. Though the Department of Defense would continue to control projects relevant to national security, civilians had won control of NASA in 1958. Plans for space weapons languished under Presidents Eisenhower, Kennedy, and Johnson, and both superpowers ceased nuclear weapons testing in space by the fall of 1963. Less than four years later, the United States, the Soviet Union, and dozens of other countries signed a landmark treaty that forbade sovereign claims to space; outlawed military bases, fortifications, and weapons testing on the Moon and other celestial bodies; and declared the cosmos free for all to use and explore, “the province of all mankind.” In light of subsequent events—accelerated tests of anti-satellite weapons, the Reagan administration’s Strategic Defense Initiative (mockingly called “Star Wars”), and the centrality of space technology to the waging of the Persian Gulf War—the accomplishments of the first generation of space policy makers are all the more remarkable. Indeed, its successes provide a template for those wishing to curb the militarization of space in our own, increasingly perilous, moment.

It is no secret that outer space has again become a focal point of the American campaign for global political leadership and military power. Just last year the Trump administration introduced plans for a “space-based missile defense layer,” a weapons system intended to destroy enemy missiles during their vulnerable boost phase. Though the president touted the shield as “new technology,” it is in many ways a repackaged “Star Wars” program requiring hundreds, if not thousands, of satellites and high-energy lasers. In August, he reconstituted the US Space Command, which had evaporated in a post-9/11 defense restructuring, to “ensure that America’s dominance in space is never questioned and never threatened.” Recent months have been even more eventful. Despite a sustained stream of media lampoons, in January 2020 Congress formally established the president’s long-awaited US Space Force, allotting it $40 billion and a seat on the Joint Chiefs of Staff. On April 6, Trump signed an executive order encouraging the extraction and use of space resources. NASA followed suit, laying out plans for a series of bilateral “Artemis Accords” intended to facilitate the collection and processing of lunar materials for commerce.

Given these developments, one may fairly wonder where future spacefarers will turn to for a sanctuary safe from human history, or if the cosmos was ever really a sanctuary to begin with. Having written his own account of the first age of space, this historian, for one, still holds out hope.

Stephen Buono is completing his PhD in history at Indiana University and was awarded the AHA’s Fellowship in Aerospace History for 2019–20. His dissertation, “The Province of All Mankind: Outer Space and the Promise of Peace,” narrates the emergence of the cosmos in the American foreign policy and military imagination. In fall 2020, he will be a postdoctoral fellow at Stanford University’s Center for International Security and Cooperation.