A Monument to Black Resistance and Strength

In the weeks after the murder of George Floyd sparked a global movement for racial justice, protesters toppled monuments honoring Confederates and other champions of white supremacy, from Jefferson Davis in Richmond and Edward Colston in Bristol Harbor, to the obscure Albert Pike in Washington, DC. But then something concerning happened. Some protesters trained their sights on monuments that could, through their imagery or the biography of their subject, be linked, only tenuously, to racism. Crowds smashed a bust of Ulysses Grant in San Francisco, yanked down a statue of abolitionist Hans Christian Heg in Madison, and the Boston Arts Commission removed a replica of Washington, DC’s Emancipation Memorial from the Common. 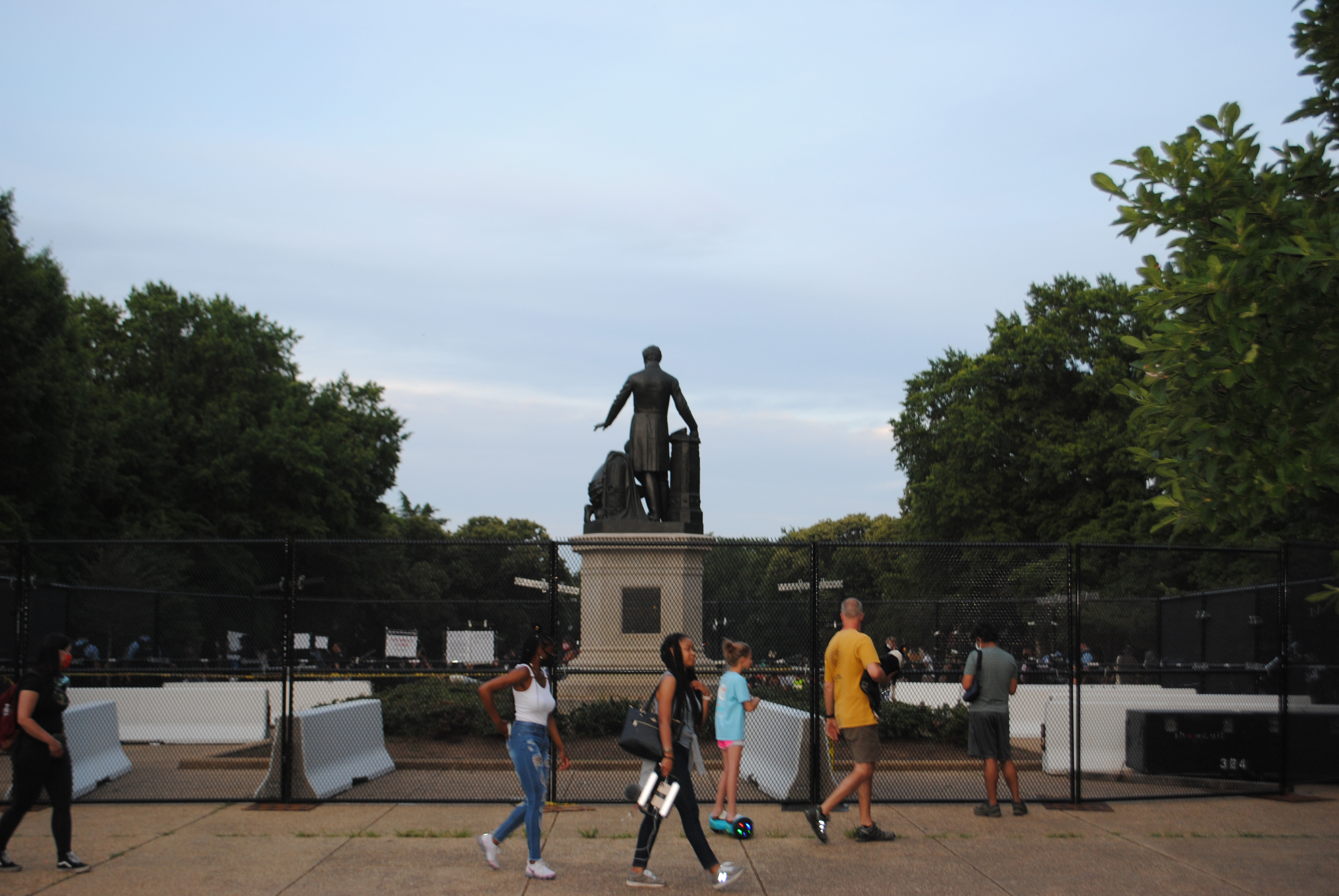 The Emancipation Memorial in Washington, DC, unveiled in 1974, sits just a few blocks from the AHA's offices in Lincoln Park. George Derek Musgrove

Protesters have offered a number of reasons for removing Confederate statues: they celebrate treason, warp historical reality, and glorify white supremacy. Yet the efforts to tear down Union and abolitionist monuments with any racist connection raise troubling questions. What if a monument’s history offers contradictory interpretations? What if many African Americans, through generations of speech and action, have transformed an otherwise objectionable statue into a symbol of resistance?

An examination of the history of Washington, DC’s Emancipation Memorial shows how complicated the answers to these questions can be.

The memorial was conceived of and paid for by freedmen, particularly black veterans. Charlotte Scott, a former slave, contributed $5 to start a memorial fund in 1865 and within four years African Americans across the country had raised nearly $20,000 towards its completion. The money went to the Western Sanitary Commission, a St. Louis-based organization founded by white abolitionists.

In 1869, the commission’s directors settled on the prototype “Lincoln and a Kneeling Slave” by Thomas Ball, which evoked the classic abolitionist image of a kneeling slave pleading, “Am I Not a Man and a Brother?” but requested alterations that complicated the statue’s meaning. They asked Ball to use Archer Alexander as a model for the kneeling freedman. Alexander had escaped from slavery by running to Union troops in St. Louis. When an abolitionist Union general harbored Alexander against the protests of local slave owners, Lincoln relieved him of command. Hence, Alexander secured his freedom despite Lincoln, not because of him. Acknowledging this history, the commission requested that the figure be depicted “helping to break the chains that had bound him” in order to “bring the presentation nearer to the historical fact.” Ball did so, but he left the figure crouching, creating a contradictory image—a slave being freed while freeing himself.

Present-day critics of the Emancipation Memorial have tapped into a long-standing African American dislike of the statue’s imagery.

The statue’s unveiling on April 14, 1876, was a grand affair. The African American organizers of the annual Emancipation Day parade marched to the ceremony several thousand strong, swelling the crowd to 25,000. President Grant and members of Congress and the Supreme Court joined Frederick Douglass, the keynote speaker, on the dais.

In a jarringly honest speech, Douglass expressed African Americans’ frustrations with Lincoln, noting that he had “tarried long in the mountain” before finally embracing emancipation. But embrace it he did, and Douglass offered this statue—the first paid for by African Americans and the first depicting an African American man—“in the spirit of liberty, loyalty, and gratitude.”

The memorial’s imagery grated on some present that day. Though the largely African American crowd cheered uproariously when Grant unveiled the statue, Douglass reportedly expressed his displeasure with the figure of the “kneeling slave,” arguing that “a more manly attitude would have been indicative of freedom.” Indeed, before the year was out, he penned a letter to a local newspaper arguing for “another monument” in Lincoln Park with “the negro … erect on his feet,” that would tell the story of Reconstruction.

Their misgivings aside, African Americans used the statue to lay claim to public space in the nation’s capital and advocate for the broad notion of democracy promised in the 13th, 14th, and 15th Amendments. For the next quarter century, as Craig Schiffert explains in “Stepping Toward Freedom,” the mounted grand marshal, armed militia companies, and elaborate floats of the DC Emancipation Day parade detoured miles from their regular route to march past the statue.

The Emancipation Memorial’s role as a focal point for black celebrations and calls for democracy shifted to the National Mall after the completion of the grand Lincoln Memorial in 1922. By the 1950s, Lincoln Park was crisscrossed with dirt paths. A 1974 Washington Post story noted that local neighborhood crews met there to fight, and federal planners considered paving it over with a highway.

The statue represents African American resistance. That history is worth preserving.

A century after its unveiling, Black women stepped in to revitalize the park and reinvigorate the memorial. The National Council of Negro Women raised $150,000 to build a statue in the park honoring its founder, Mary McLeod Bethune. It was unveiled in 1974 as DC’s first memorial honoring a Black woman. As part of the installation, the National Park Service planted trees, installed walkways, and turned the Emancipation Memorial 180 degrees to face the Bethune Memorial.

In the 1990s, another Black woman, Loretta Carter Hanes, placed the Emancipation Memorial at the center of her campaign to make Emancipation Day an official DC holiday. Hanes laid a wreath at the statue every April 16, beginning in 1993. She told the Washington Post, “I was attracted to it because it was the only monument paid for by former slaves.” Beginning in 2005, Emancipation Day became an official city holiday.

Present-day critics of the Emancipation Memorial have tapped into a long-standing African American dislike of the statue’s imagery. “When I look at that statue, I’m reminded my freedom and my liberation is only dictated by white peoples’ terms,” said 20-year-old Glenn Foster, who this past June started a group dedicated to removing the memorial. But by focusing on that imagery, critics ignore the memorial’s history. From Charlotte Scott seizing the initiative to build a memorial, to Emancipation Day marchers defiantly celebrating their freedom, to Loretta Carter Hanes demanding that we honor the day our freedom came, the statue represents African American resistance. That history is worth preserving.

Some contemporary activists embrace a dogmatic approach to history that “cancels” any historical figure or image that may be interpreted as racist. This perspective can create a false equivalence between a statue of Lincoln who, however reluctantly, fought to end slavery, and one of Jefferson Davis, who fought to maintain it in perpetuity. Human beings are complex, and so too is our history. If our understanding of our past informs our actions in the present—and we believe it should—then that conception must be nuanced enough to help us determine our friends, however tardy to the cause and halting in their support, from our enemies.

Chris Myers Asch is the co-founder of the Freedom Project in MS Delta and the Capital Area New Mainers Project. He tweets @chrismyersasch. George Derek Musgrove is associate professor of history at the University of Maryland Baltimore County. He tweets @gdmusgrove.