—quite as much, argue historic preservationists, as LGBTQ politics and culture. 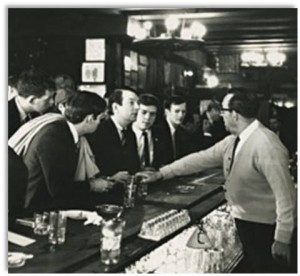 Julius Bar, established in the 19th century and still extant, was the site of a 1966 “sip-in” sponsored by the Mattachine Society after a bartender refused to serve gay patrons. Photo © 2015 Courtesy Estate of Fred W. McDarrah.

Yet obtaining recognition for these sites has proved challenging in many cities, including New York. Structures or public places of great historic significance to the community might be quite ordinary examples of vernacular architecture, making it difficult to rouse much enthusiasm within local preservation societies. Additionally, for many years LGBTQ history lacked much traditional archival documentation, making it harder for preservationists to build the case for recognizing these sites. Finally, some established landmarks with great significance to the LGBTQ community were recognized for other reasons, their queer context left out.

Fortunately, the situation is changing. In May 2014, Department of the Interior secretary Sally Jewell announced an initiative to identify LGBTQ sites for inclusion within the National Park Service’s Heritage Initiatives programs. New York’s Stonewall Inn (the Greenwich Village bar where a police raid set off several nights of resistance in June 1969) is the only National Historic Landmark recognized specifically for its significance to LGBTQ history. Four other sites are on the National Register of Historic Places.

Preservationists have responded enthusiastically to the Interior Department’s challenge. The New York City LGBT Historic Sites Project, building on a department grant, has just won additional funding from the New York Community Trust and the Arcus Foundation to make the case for five new sites for potential national landmark status and to create an ambitious digital mapping project with the web app Historypin.

One of the project’s co-founders, Jay Shockley, says that the map project will begin with sites that preservationists already know are significant but lack official designation. Shockley and several colleagues actually began this work 22 years ago, and their data collection is still available online. But the new work with Historypin will go a step further by collaborating with academic historians and archivists (who will provide layers of “context” for each site) and, in a subsequent phase, LGBTQ community members themselves (who will crowdsource layers of the map with documents from their personal archives, such as photographs and letters). 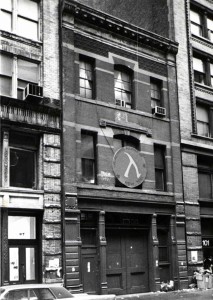 With a lambda announcing its presence, the liberationist Gay Activists Alliance held meetings and dances at this firehouse in Manhattan’s SoHo neighborhood in the 1970s. Photo: New York City Landmarks Preservation Commission.

For preservationists, the meaning of “context” is slightly different from the ways academic historians often use it. Shockley illustrates the idea using the homophile groups of the 1950s and 1960s. “Some early gay rights organizations, like the Daughters of Bilitis and the Mattachine Society, were secret,” he explains. “Because of the hidden nature of this community, including the risk of arrest [at gay bars], there were many different sites where they had meetings. If someone proposed [landmarking] a building, and it turned out there were a dozen different locations where that group met, you have to document that.”

This is where collaboration with archivists, academics, and community members comes into play. Institutions with LGBTQ-related holdings, such as the Center, Brooklyn’s Lesbian Herstory Archives, and the New York Public Library, can let preservationists home in on important addresses, and community members with personal artifacts can refine this knowledge with memories. Two years ago, Shockley says, he went with an intern to the NYPL to ask what parts of its collection could lead them to specific sites. “Nobody had ever asked [them] that question,” he says. “Ultimately, once they got the concept, they realized that if you have the early homophile newsletters, they had the addresses. That’s exactly what we need. … We want all of our history, and it has to be site based.”

Shockley, who recently retired from the New York City Landmarks Preservation Commission, admits to having a bit of frustration with those academic historians who don’t seem to acknowledge the importance of site-based knowledge. “What was the address of James Baldwin’s house?” he asks rhetorically. “Most academics don’t think that through; as long as they have a slide [to show], they might not care whether that house still exists. Historic preservation keeps our heritage intact so you can see it.”

This, ultimately, is important to senior community members, whose memories can be attached to places in ways that historians need to account for. An initiative for crowdsourcing a Historypin map of LGBTQ California is also underway. Shockley and his colleague, project co-founder Ken Lustbader, say the New York map will include greater participation by academic historians and archivists.

The project will reach beyond Manhattan to identify and provide documented context for at least five historic sites to submit to the National Register of Historic Places. Kerry McCarthy, senior program officer of the New York Community Trust (which awarded the LGBT Historic Sites Project $50,000), argues that “the LGBT community represents 3.8 percent of the population but just five places on the National Register. … LGBT history has remained in the closet.” Projects like these promise to help change that.