At a recent Washington History Seminar, hosted by the National History Center and the Wilson Center, Sharita Jacobs Thompson spoke about commemorating Emancipation Day at the Hill Center. She now describes and reflects on this important event.

On the morning of April 15, 2015, I made the trek to the National Museum of Civil War Medicine in Frederick, Maryland, to pick up its traveling exhibit, The Emotional Toll of War. That afternoon, I pulled into the driveway at Hill Center at the Old Naval Hospital to unload the cargo. Within 15 minutes, Frank Robinson (Hill Center’s “Mr. Everything”) unpacked and assembled the display. This was the first sign that after more than a year of planning and preparation, the kickoff of the first annual Benjamin Drummond Emancipation Day Celebration had arrived.

I vividly remember my first conversation with Mary Ann Brownlow, producer of the Benjamin Drummond Emancipation Day Celebration. She had read Ta-Nehisi Coates’s piece “Why Do So Few Blacks Study the Civil War?” in which he argues for a more inclusive narrative, and became intrigued. During that first conversation, she also shared her belief that the District of Columbia’s Emancipation Day, which commemorates the end of slavery in the nation’s capital and is a citywide holiday, would provide the perfect platform to examine the Civil War from the African American perspective. I agreed, and our journey commenced. We embarked upon a series of meetings with Hill Center board members, our advisory board, vendors, and each other.

On April 16, 2015, after much brainstorming, meetings, fundraising, e-mails, and discussions, we had four days of free and public events that brought together a diverse group of prominent scholars, artists, and public figures for a series of moderated conversations. We hoped that this format would have a broad public appeal and would engage attendees in a deeper understanding of the African American experience during the Civil War.

During our opening event, Yoni Appelbaum, senior editor at The Atlantic, and Daryl Scott, a Howard University history professor and president of the Association for the Study of African American Life and History, both spoke. They considered the proposition “Why Do So Few Blacks Study the Civil War?” and weighed in on Coates’s argument. One of Scott’s conclusions was that the Civil War became less of a central event for black people to commemorate once the civil rights movement commenced.

The following day, we embarked on two lively discussions. The first addressed another article by Coates, “The Case for Reparations.” Lisa Crooms-Robinson (Howard University), Nathan Connolly (Johns Hopkins University), and Christina Swarns (NAACP Legal Defense Fund) examined different angles of the debate, from how we address the suffering of black women in terms of the denial of reproductive rights to “the profitability of African American poverty.” Later that evening, Kate Masur (Northwestern University) and Elizabeth Lorang (University of Nebraska-Lincoln) directly addressed emancipation in the nation’s capital with moderator Krissah Thompson (Washington Post). This panel grappled with questions such as, “Did the government’s willingness to compensate owners for their slaves somehow threaten to legitimize the institution?”

Saturday was packed with events. Edna Greene Medford (Howard University) and archeologist Cheryl LaRoche considered the meaning of emancipation and explained why emancipation narratives have to be broader and more inclusive. James Downs (Connecticut College) and Scott Stossel (The Atlantic) discussed sickness and the Civil War and talked about how “health was political and blacks felt [that] reporting illness played into the unfit for freedom narrative.” We heard poems written by African Americans during the Civil War, read and discussed by poets Kyle Dargan and Holly Bass, writer Dolen Perkins-Valdez, and scholars R.J. Weir and Elizabeth Lorang.

On our last day, we held a historic walking tour that highlighted the places where African Americans lived and labored on Capitol Hill and a brilliant conversation at Hill Center with Psyche Williams-Forson (University of Maryland College Park) and celebrity chef Carla Hall on African American foodways. During that conversation, Williams-Forson declared, “We have to explode this [narrative] that all [slaves] ate scraps.” We ended the four days of events at Christ Church, with a concert featuring African American music from the era performed by the Washington Performing Arts’ Men and Women of the Gospel Choir. Hari Jones of the African American Civil War Memorial & Museum served as narrator for this closing event. The celebration appropriately ended with a catalogue of “Negro spirituals” including “Steal Away” and “Go Down Moses.” After the singing was over the crowd slowly dissipated. When the church was finally empty, I walked through the church doors, and suddenly, it was done.

Two weeks later, I arrived at Hill Center to collect the traveling exhibit. On the ride back to Frederick, Maryland, I recalled Frank stopping me as I entered the building, and saying “Good job! We have to make sure that we do this every year.” And to that I said, “We will.” 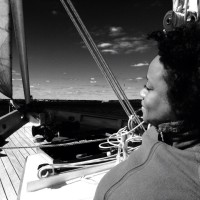 Sharita Jacobs Thompson is a former assistant professor of Civil War era studies and Africana studies at Gettysburg College. Currently, she is an independent scholar and consultant in Washington, DC. Her research focuses on the African American experience during the American Civil War and Reconstruction era.