Following the National History Center’s second annual reception for congressional interns, NHC and AHA intern Kevin Hess reflects on an evening of conversation regarding history’s place in politics and the wider world with peers and historians alike.

Last week, the National History Center of the American Historical Association held its second annual reception for congressional interns. This year’s event saw about 40 interns representing congressional offices from 15 different states as well as various other governmental agencies in attendance. Hailing from large public universities, small liberal arts colleges, and Ivy League institutions, undergraduate and graduate students in history, political science, international relations, and even engineering and mathematics all congregated in the Albert J. Beveridge Room of the American Historical Association to consider history’s ongoing importance in politics and the wider world.

The National History Center hosted the event as part of its efforts to build its Congressional Briefings program, which aims to bring leading historians to Capitol Hill to provide non-partisan briefings on past events and policies that shape the issues facing Congress today. A strong relationship between the center and congressional staffers is essential to the success of the briefings program, as the connection with these interns and the offices they represent are crucial to providing members of Congress and their staff with the historical background needed to understand the context of current legislative concerns. With so many interns from a wide breadth of congressional offices in attendance, the reception looked to provide a lasting connection between the center and staffers on the Hill. 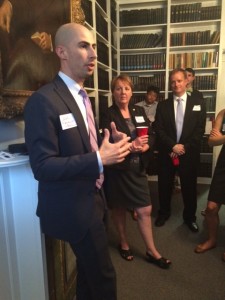 Jason Steinhauer of the John W. Kluge Center of the Library of Congress describes his storied career in public history to the interns in attendance.

The reception itself featured esteemed and experienced public historians addressing the room of young interns. Both Betty Koed, historian of the US Senate, and Matthew Wasniewski, historian of the US House of Representatives, spoke about how their passion for history led to their respective positions. Jason Steinhauer, program specialist at the John W. Kluge Center of the Library of Congress, gave a fascinating description of his career in public history and museum curation. His words and story were intriguing in their own respect, but they also allowed the aspiring historians in the room to breathe easier by answering the ever-present question: “What are you going to do with a history degree?” For me personally, it was reassuring to know that in the case of all three of these speakers, simply having a genuine passion for history and the ambition to relentlessly pursue it can lead to such promising career choices and bright futures.

Later, Dane Kennedy, director of the National History Center, and Jim Grossman, executive director of the American Historical Association, addressed the group, stressing the critical part that history plays in understanding today’s issues and concerns. They also emphasized how an interest in history, and a deeper understanding of what history actually is and how historical research is conducted, is essential to successful people in various positions around the world. 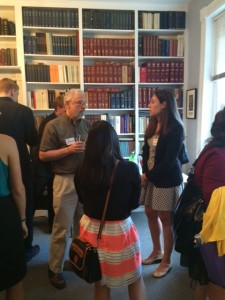 Jim Grossman, executive director of the AHA, answers questions and converses with congressional interns following his address to the group.

The reception centered around hearing these highly successful historians talk about what they do on a daily basis in their respective positions and describe how their understanding of the historical discipline helped them along the way to where they are today. But what was even more moving to me was the lasting impact left on young adults in the room. As I looked around during the speaking portion of the event, I saw numerous interns nodding in agreement to what was being said, listening attentively, and truly soaking in the environment and the experience.

The fact that so many interns stayed afterwards to pick the brains of these historians as well as to discuss their professional and academic aspirations with their peers struck a chord with me. Growing up in a world where young academics are constantly discouraged from studying the humanities, it was honestly refreshing to not only be reminded of how vital history still is today, but to feel truly immersed in a community of like-minded individuals who refuse to let history fade into the background. This is what the National History Center and the American Historical Association are all about; this event acted as another cobblestone in a road of diligent work that these organizations have laid over the years. The reception itself simply provided yet another forum that allowed interns to converse, discuss, argue, and leave with a lasting impression that history always has, and will undoubtedly continue, to serve as a lynchpin in our understanding of the ever-changing world that we live in today.