By Caroline Marris and Jake Purcell

History in Action, one of the pilot programs under the AHA’s Career Diversity for Historians initiative, is primarily organized and driven by graduate student ideas and efforts. Previous posts in this series have chronicled our annual History in Action conference, which has brought together historians, policy and education experts, and research institutions for two years running, and our Clinic Course, designed to bring historians from a variety of career paths into the classroom with history graduate students.

History in Action Research Assistantships (HARA) allow students to substitute work for a local institute, museum, or publisher (among many other public and private institutional options) for a teaching assistantship. History in Action Project Awards (HAPA) support individual student projects. This structure has allowed students to work at New York’s first food history museum, to design and research exhibitions at the Brooklyn Historical Society, to write as a music critic for the New York Times, and begin a historical cooking blog.

In this post, we want to highlight the stunning array of off-campus historical endeavors that will be funded by a series of financial awards in the upcoming year. These projects will continue skill-building and professional development events. Stay tuned over the summer and in the fall for blog posts from the field as the recipients keep us posted on their varied challenges and accomplishments.

Andrew Lebovich will be assisting the Social Science Research Council’s Conflict Prevention and Peace Forum with ongoing research in Central, West, and North Africa. He will cover issues arising in the region and participate in emerging projects on conflict and political accommodation in Libya, Egypt, Tunisia, and other countries. He will also help the CPPF to organize meetings and conferences with academics and UN officials who work on those regions.

Nicholas Mulder and Madeline Woker will partner with the Institute for New Economic Thinking (INET) in its Young Scholar’s Initiative to establish a “reading economics” seminar, a series of podcasts, and organize an annual conference at Columbia that will aim to strengthen relationships between historians and economists, and foster economics-related research skills for graduate students.

Nancy Ng Tam is collaborating with the Tenement Museum to develop new permanent exhibits on the families that lived at their building at 103 Orchard Street. As part of the museum’s efforts to encompass more perspectives and stories, she is conducting a series of Cantonese-language oral histories and doing other research on the Chinese immigrants who lived at the building in the 1970s and 1980s.

Yesenia Barragan and Maria John are continuing work on the South El Monte Arts Posse’s East of East community-based archive project. The project has collected oral histories, photographs, city documents, fliers, and essays related to community narratives in South El Monte and El Monte, and they are partnering with local public high schools to incorporate this material into the curriculum as part of a broader move to implement ethnic studies in California public schools.

Mary Freeman is building ties with New York-area schools by making primary sources in Columbia University’s Rare Book and Manuscript Library available to secondary-school students and the public more broadly. She is digitizing materials and creating lesson plans based on those documents, as well as inviting area middle and high school classes to visit the RBML to engage with primary sources.

Jessica Lee will be working with the New York Mayor’s Office of Immigrant Affairs, looking explicitly at policy issues and thinking about how immigration history can provide new perspectives on current immigration issues.

Scot McFarlane is working with relatives of the survivors of the Slocum Massacre, carried out against an African American community in east Texas in 1910, to shed light on the event by collecting and presenting primary sources. The grassroots public history program is creating a digital home for primary-source and curricular material related to the massacre to counteract its erasure and obfuscation.

Brianna Nofil and Jake Purcell are creating Medieval America, a project on the lives and journeys of medieval European buildings moved to the US in the first half of the 20th century. They are partnering with Atlas Obscurato publish these stories for large, popular audiences, complete with interactive maps, pictures, and interviews with the people who use them now. 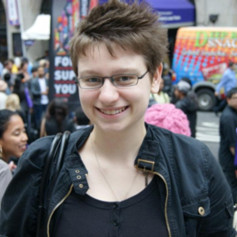 Caroline Marris and Jake Purcell are Columbia’s new History in Action graduate student coordinators for the 2015–16 academic year. Caroline’s work focuses on the political geography of the English Channel and its environs in the 16th and 17th centuries. Jake studies the production of legal and other documents in early medieval Europe. They can be reached at cfm2123@columbia.edu and jrp2184@columbia.edu.