Bridging Space and Time in a History Presentation Extravaganza

In early June, as Chicago’s non-existent spring of 2015 melted into the rainy first days of summer, ten PhD students and candidates in history spoke on their research for five minutes each, taking four minutes of questions from the audience afterward. Our John Hope Franklin Room was packed with professors and students from all fields of our department, perhaps as eager to find out what constitutes a “History Presentation Extravaganza” as they were to hear the presentations. The Extravaganza, part of the Career Diversity initiative to help students prepare for employment within the academic professoriate and beyond, was created to encourage us graduate students to work on crucial presentation skills by giving us a specific (and rather daunting) speech task. The pleasure of learning to communicate to a variety of audiences in a variety of media was augmented by small cash prizes for the best presentations. Our timekeeper was friendly, but unrelenting: five minutes was the absolute limit for the talks.

Three judges—Ada Palmer, a historian of the Renaissance and early modern Europe in our department; Nancy Spiegel, bibliographer of history at the Joseph Regenstein Library; and William Rando, director of the Center for Teaching and Learning—had the unenviable task of choosing the three best presentations among fields ranging from the Byzantine empire to modern South America. Nick Kryczka, the first-place winner for his presentation on Chicago public magnet schools and their role in educational desegregation, wrote that the greatest challenge to him during the process was “paring [his seminar paper of] 53 pages down to five meaningful minutes,” but that the task “made one really think about what was worth communicating.” Kryczka also touched on another challenge of preparing for his presentation, one mentioned by other presenters and in our written feedback: how to craft effective PowerPoint slides to create a complementary visual without repeating spoken information or distracting the audience.

Jessa Dahl, who discussed her work on 19th-century maps of Yokohama, Japan, wrote further about the task of cutting her seminar paper down to an easily digestible five-minute talk: “When I signed up for the presentation, it seemed like an exciting challenge. Then, when I actually had to start doing the cutting early in the week, it seemed like pulling teeth, [but] when the presentation started to take on its own shape, it started to become fun again.” Pablo Rangel, second-place winner for his talk on sugar beet cultivation in Nebraska, wrote that this shaping and cutting process took him eight hours but was “time well spent,” as he now has written the section abstract and collated some images for his dissertation proposal.

Only two of the presenters were in the ABD phase of the program (including me), and I appreciated that the Extravaganza provided a rare opportunity to hear what students in earlier phases of the program are working on. I had a personal connection to both Pablo and his work that I did not previously know about, because we are both Nebraskans. After the event’s conclusion, he and I discussed the links between his project and the literature on earlier Caribbean and Brazilian sugar cultivation with which I was more familiar. I give this example as one of many similar conversations I heard around the reception. A friendly and gregarious atmosphere prevailed as we snacked on lunch in the Tea Room across the hall, waiting for the judges to come back in with the results of the competition. As they debated the merits of the best presentations, the judges also referred to the detailed feedback they had written to share with each presenter. This was an especially impressive feat, given the short time frame that they had to make their comments on content and style. 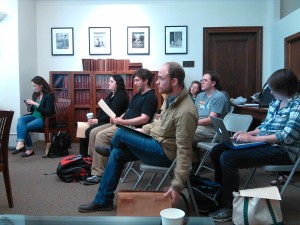 Presenters were unanimous in advocating for the Extravaganza to be continued and expanded in future years. Felix Szabo spoke of the difficulties in stoking interest in her work on Byzantine eunuch monasteries among “modern historians,” as the other nine presenters all had topics that fell in the 19th or 20th centuries. Szabo seemed to have accomplished this task well, however, when her question time lasted the full four minutes. She urged historians working on earlier periods to join the event next year after her pioneering efforts.

Participants in the Extravaganza especially appreciated the challenge of condensing complicated ideas into a highly compact, brief talk format, a skill set that will be tested and developed in preparing academic conference talks, or in any number of contexts outside the academy. For its first iteration, both the judges and presenters pronounced the Extravaganza a resounding success: it was a first-rate test of our presentation skills, but perhaps even more importantly, it helped to build some collegial and personal bridges among doctoral students in our very large department. The Extravaganza proved a useful and exciting exercise and could easily be adapted to any size department, or even as the closing event of a graduate seminar. 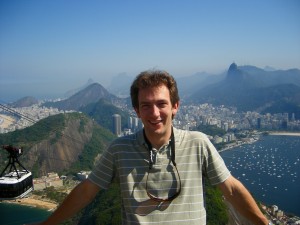 Christopher Dunlap is a PhD candidate in history at the University of Chicago. His research interests include Latin American history of science and technology, Brazil-Argentina relations, 20th-century Spain, environmental history, informal diplomacy, Atlantic history, and intellectual exchanges. His dissertation project is entitled “Epistemic Communities, Nuclear Science, and the State in Brazil and Argentina, 1950-1991.”