Being There: Writing History for a Postmodern World

Several weeks ago, historian Kate Brown spoke for the Washington History Seminar, hosted by the National History Center and the Woodrow Wilson Center, on communities built around cities designed to produce plutonium. Now, she reflects on the session and the challenges as a historian doing research in a postmodern world.

“Your work seems to have a lot to do with modernism. Can you describe how a critique of modernism links the works you have written?”

This question from the audience at a recent National History Center talk I gave on Plutopia, my 2013 book on the first two cities in the world to produce plutonium, is one I have thought about a great deal. That is because, as a historian of broad research interests, my travel itinerary has been in the past two decades sadly predictable. I have wandered in the United States, Kazakhstan, Ukraine, and Siberia from Gulag sites, to villages of deportees, to nuclear wastelands. Roaming about these “modernist” wastelands, wondering who was the last to turn out the lights on projects that failed (or even worse, succeeded), has been my fixation as a historian.

As a chronicler of communities that have been shattered, destroyed, or contaminated, I have had to get creative in trying to recapture histories in ways that did not duplicate the assumptions embedded in ideologies that created the disasters in the first place. For example, in my first book, I wrote about people the Soviet government described in national terms as “Poles,” “Germans,” and “Ukrainians.” I knew from my research those were abstract concepts, and I did not want to simply repeat the recorded number of people in each allegedly discreet, national group. As documents tend to be written by the “reformers” who came to fix problems, I have turned to alternative sources, in addition to the usual archival documents. To find sources that were not purposefully preserved and placed in collections or museums, I have shown up in places and started looking around, using the place of historical action as an archive. I talk to people, not officials, but usually an older person leaning on a gate or sitting on a bench. That gets me started. They tell me where the factory or the synagogue once stood, who used to live down the street, about the cemetery that no one visits any longer. 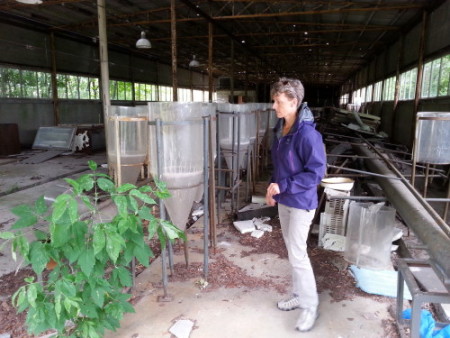 Brown in an abandoned fishery in the Chernobyl Zone.

As I explore, I run into all kinds of problems. People tell conflicting stories. I make erroneous cultural assumptions; ask impolite, prying questions; and generally stumble into the many roadblocks of a traveler. But most problematically, the places I go, where so much happened in the past, often disappoint. There really isn’t much there to look at anymore. To describe, in other words, the places I visit is to admit to the partialness and paltriness of the knowledge I distill from them. Places offer up only remnants—tattered, muddy, sunken, rusted, and despoiled. Once I am in place, sources are out of place, disorganized and chaotic, like a box of files tossed in the air, all structure and order eradicated. Arriving at a site, I have little idea what is missing, stolen, destroyed, or buried. “Visibility,” Bruno Latour writes, “is the consequence of lots of opaque and ‘invisible’ work.” In an overlooked Ukrainian shtetl or an abandoned Gulag camp, no one has done that work before I arrive.

Trying to sort through and acknowledge the problems of using place as an archive, I have felt the need to situate my personal quest as a researcher in the histories I write. As a consequence, my texts often read as travelogues. Many scholars have welcomed the use of the first person in historical writing, but just as many complain that somehow this narrative mode cheapens the history or serves as a disruption. No critical reviewer has yet offered more substantial comment about why the first-person is inappropriate. The off-hand comment is that the critic wants to know about the historical period, not about the author—that the first person is the impulse of an egomaniac. I find that confusing. The “I” and the author’s ego are in the text whether acknowledged or not. Why do some readers want to be deceived?

In exploration of these historiographic and narrative questions, I recently published a book called Dispatches from Dystopia: Histories of Places Not Yet Forgotten (University of Chicago, 2015). In each chapter, I visit a different place. Some are small, such as a basement hotel in Seattle where Japanese Americans left their possessions in 1942 before their internment. Other places are limitless, such as a faked website about the Chernobyl Zone on the World Wide Web. At each site I have a series of misadventures. The misadventures are embarrassing. They reveal my lack of preparedness and cultural insensitivities, but they also offer an opportunity to consider how problematic place as an archive can be, a condition that is yet more complicated by my presence in getting, mediating and narrating the story.

In one escapade, I went to Uman’ Ukraine during Rosh Hashanah when 10,000 Bratslavers arrive from around the globe to be at the grave of Nahman von Bratslav, their leader who died in the 17th century. I went because I wanted to get a glimpse of what a Ukrainian shtetl was like with thousands of Jews in it because I was writing about a period of Ukrainian history before the Holocaust. I did not know before I arrived that all 10,000 visitors were men, and that the Bratslavers could not look on women during the holiday. I was turned away at the grave but returned in the evening to watch from a tree that I climbed. That was fine until I was pulled down from the tree by two angry Ukrainian cops. The story gets yet more complicated after that, but suffice it to say that the whole episode grew out of my ignorance.

I find I need to explain the use of the first person, but in most historical texts, the third-person narrative voice is presented without any justification or comment, and that begs a lot of questions. Where does the narrator’s voice come from? How did this person arrive at this story and why? The third-person voice usually paves over a discussion of narrative voice and the author’s perspective, despite the fact that these are vital elements of nonfiction prose. I wrote Dispatches from Dystopia in order to start a broader conversation among historians about the kind of sources we use, the prose we write in deploying them, and, most importantly, about why, in a profession that purports to tell the truth, most scholars pretend they are not there when, of course, they are. The examination of modernism and modernist discourses has given scholars a great deal more tools so that they do not duplicate the assumptions of the modernizers. We generally, however, have more work to do in in figuring out how to avoid reproducing modernizers’ narrative voice and legitimizing prose.

Kate Brown lives in Washington, DC and is Professor of History at UMBC. Brown is a 2009 Guggenheim Fellow and author of Plutopia: Nuclear Families in Atomic Cities and the Great Soviet and American Plutonium Disasters (Oxford 2013), which won six prizes, including the American Historical Association’s Albert J. Beveridge Prize for best book on the Americas. Her first book, A Biography of No Place: From Ethnic Borderland to Soviet Heartland (Harvard 2004), won the AHA’s George Louis Beer Prize for the best book in international history. She is currently writing a history of human survival and endurance among the communities circling the Pripiat Marshes.