At the First ScholarFest, Conversations and Connections

This past Thursday, staff from the AHA and the National History Center headed to the Kluge Center at the Library of Congress for ScholarFest, a celebration of 15 years of the center’s operation, or, as Washington Post reporter Peggy McGlone described it, “speed dating for the intellegentsia.” As Jason Steinhauer explained in his previous post, ScholarFest featured 70 scholars, all past or present Kluge Center scholars, paired up in “lightning conversations.” Each conversation was 10 minutes long. The day began with three concurrent sessions, Past, Present, and Future; continued with two concurrent sessions in the afternoon; and concluded with a final panel on the subject of freedom of expression. 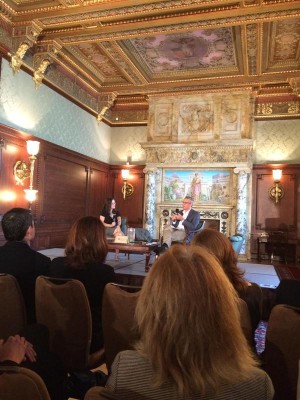 Scholars exchange ideas in the magnificent Members Room during the session “The Past.” Photo by Amanda Moniz.

“Life: Past—the Ways We Write about Those Who Came before Us,” was held in the lavish Members Room, whose mosaics represent history. With Clio there as a beacon of light, the conversations began. Scholars studying vastly different topics found common ground, as when Jenna Weissman Joselit related her exploration of catacombs to Georgia Michael, who climbed ladders to better examine stained glass windows in Gothic churches. These historians discussed the value of studying art in its original context. Later in the session, Mark Noll, who studies 19th-century discourse surrounding slavery, and Kate Masur, who focuses on the attitude towards slaves as contraband, talked about the necessity of “explaining before judging” past attitudes.

Pairings between scholars varied in nature. Some studied similar fields, with one scholar more advanced in her career than the other. Other pairs studied related topics but in different time periods or cultures. For instance, during a later session, “Right/Wrong: Perspectives on Notions of Morality,” John Witte Jr. (legal history and marriage law in America) and Marianne Kamp (Central Asia in the Soviet period) discussed the origins and ethical problems of polygamy. Kamp discussed current arguments for and against the practice within Islamic law, while Witte noted the problem polygamy poses in American culture, especially with the recent wave of gay marriage legislation sweeping the US. Although examining polygamy in vastly different cultural contexts, Witte and Kamp’s conversation flowed seamlessly, with each scholar finding food for thought in what the other had to say. Frequently in discussion, issues raised with respect to a previous time period triggered considerations of current affairs. For instance, when Sonia Lee discussed her research on how drug use was criminalized in the 1960s and 70s, leading to a stereotype of African Americans as violent, her conversation with James Childress ultimately prompted both to consider the recent controversy of Indiana distributing needles to reduce HIV transmission. In all the conversations in this session, the notion of right and wrong was teased rather than explicated—with cultural and legal historians, cartographers, public policy experts, and religious scholars all weighing in on the complexity of morality.

Sometimes meandering but always inspiring, the cross-time-period, interdisciplinary nature of these discussions proved extremely thought provoking. Even though no one conversation could become a fully developed debate in front of the audience (given time constraints), I came away from each with a powerful impression of the value of knowledge and spoken communication of that knowledge. This rapid-fire form of scholarly public exchange in the form of conversations gave way to connections that might not have been made in a series of publications.

It was most fitting that the panel concluding ScholarFest was a full-length discussion on “Freedom of Expression and Why It Matters.” Featuring William Julius Wilson (civil rights, race and social policy), Wm. Roger Louis (English history), Lamin Sanneh (Africa, Islam, and Christianity), and Ambassador Teresita C. Schaffer (South Asia), this panel teased out the complexities of freedom of expression. Is it a universal right? What responsibilities does it entail? Is it ethical for the US to intervene in countries where freedom of expression is stifled? How does the notion of freedom of expression apply within the academy? This topic mushroomed, with each speaker having a unique perspective to offer.

Ultimately, with so many brilliant scholars floating complex ideas, we arrived at few hard conclusions, but many interesting questions arose in the process, and I walked away with a renewed sense of the value of scholarship and the need for it to grow uninhibited. The lightning conversations gave the audience quick digests of each scholar’s research focus, while the interaction between scholars drew new relationships between disparate fields. The format emphasizes the value of scholars interacting with one another, and it is a format I hope to see more often in the future.