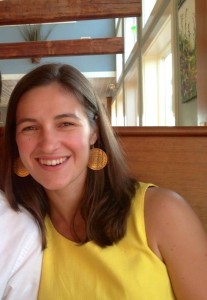 Kate Geoghegan is a PhD candidate in history at the University of Virginia. She lives in Washington, DC, and has been a member since 2012.

Why did you first develop an interest in history?

I first developed an interest in history in third grade. I had this great teacher named Mr. Williams who used to draw pictures of the key “characters” in his historical narratives up on the blackboard. He did voices too and really drew us in by presenting history as an exciting story. I remember learning about the history of our hometown, Cape Elizabeth, Maine. The town’s first known European inhabitant was the crooked trader Walter Bagnall. Bagnall, who I believe was eventually killed by Native Americans he had tried to swindle, took on a very villainous, menacing aura in Mr. Williams’s rendering.

Right now, I am finishing my dissertation, which examines US efforts to interpret, respond to, and shape internal political, economic, and geopolitical change in the Soviet Union during the volatile years surrounding its collapse. My work contends that significant, but oft-overlooked, changes in the character of US influence in the USSR during the waning years of the Cold War laid the groundwork for subsequent US efforts to shape Russia’s post-1991 “transition.” Highlighting this crucial transitional period, it traces the efforts of policymakers and non-governmental actors to recalibrate their established Cold War missions in response to the unprecedented dangers and opportunities unleashed by Gorbachev’s liberalizing and destabilizing reforms. In particular, it demonstrates that non-governmental actors—from NGOs, philanthropic foundations, and academic and private sector groups—played an increasingly prominent role in US-Soviet policy. As the USSR grew more accessible and politically “pluralistic,” they established contacts with and supported democratic, nationalist, and civil society forces outside of the communist establishment. This decentralized injection of aid into the emergent Soviet power vacuum had a complex and significant impact on the internal political dynamics that ultimately brought about the Soviet collapse.

After I finish my dissertation, I am interested on continuing to investigate the changing character of US influence in the late Cold War. I am planning to pursue a second book project that looks at the rise of democracy assistance as a tool of US foreign policy through the institutional lens of George Soros’s Open Society network and the National Endowment for Democracy.

I am going to give a shout out to my very good friend Lauren Turek, whose forthcoming article in Diplomatic History “To Support a ‘Brother in Christ’: Evangelical Groups and U.S.-Guatemalan Relations during the Ríos Montt Regime” is really top notch. I have only read draft versions, but it is a fascinating article that sheds new light on the impact of religious groups on US foreign policy.

I have always thought that it was impossible to understand or appreciate what is unique about our contemporary world without studying history. I love being an historian because it is a craft that enables us to better comprehend ourselves. Its study both illuminates the rich distinctiveness and contingency of different historical moments while simultaneously unveiling broad themes and patterns that seem to recur across time and space.

I joined the AHA because it is a wonderful scholarly community that publishes a fantastic journal and provides great resources for its members.

I am planning to attend the AHA for the first time this year, so to be determined!

I love playing and watching sports. I am from Maine, so I am a big Patriots, Red Sox, and Celtics fan. I have recently gotten into powerlifting, which is a daunting sport filled with big heavy weights, but quite rewarding. I also love cooking, skiing, and travel.