Henry Maar is a PhD candidate at the University of California, Santa Barbara. He lives in Ventura, California, and has been a member since 2006. 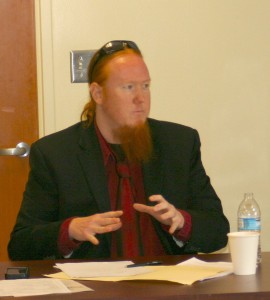 Fields of interest: modern US, the Cold War, US foreign relations, peace, technology, and the emerging field of nuclear history

History was always my favorite subject in school. I developed an interest in the modern world because I wanted to know more about the subjects that I heard about, but didn’t learn about in high school: the Cold War, JFK, Vietnam, Nixon and Watergate, Carter, and Reagan. Developing a political conscious in the George W. Bush era, I wanted to know more about antiwar movements in the past and more about our foreign policy. I discovered Howard Zinn’s A People’s History of the United States early in my undergraduate years, and really liked the approach of telling history from the standpoint of common people. Moreover, the book was empowering and made you feel like you could change the world and shape the events around you.

I’m currently finishing a dissertation on the Nuclear Weapons Freeze Campaign of the 1980s, “The Challenge of Peace: Public Opinion, the Reagan Administration, and the Movement to Freeze the Arms Race.” The freeze campaign emerged in the early 1980s as a result of the escalating arms race, the revived Cold War, and the fear that Ronald Reagan would lead the world towards nuclear war. The campaign attracted a wide following, from antinuclear activists to weapons scientists, from Catholic bishops to evangelical preachers; it united Republicans and Democrats, and even Reagan’s rebellious daughter Patti joined. It was more than just a social movement, however: it was a cultural and social phenomenon. We see it reflected in debates over the definition of pro-life in Catholic circles. Indeed, the US Conference of Catholic Bishops would write a pastoral letter that condemned the arms race and called for a halt to the production, testing, and deployment of new nuclear weapons systems. In the popular culture, the theme of a world destroyed by nuclear war ran through songs, music videos, and album covers. The possibility of a nuclear war was the plot in box office hits (WarGames) and busts (Superman IV). But perhaps the most memorable film was ABC television’s The Day After, a made-for-TV movie depicting the aftermath of nuclear war in Lawrence, Kansas. (Over 100 million viewers watched The Day After and the Reagan administration used 20 volunteers to answer calls from anxious viewers.) Politicians clamored to attach themselves to the word “freeze”—you had Ted Kennedy championing it in the Senate, but also more hawkish senators attempting to attach themselves to the campaign in some way. (For instance, Henry “Scoop” Jackson was facing a re-election challenge from a Republican who backed the freeze campaign. Jackson then sponsored legislation which called on the US to first match Soviet warhead numbers, then freeze the arms race. The activists called this the “fake freeze,” but it was a way for politicians who were lukewarm on the freeze proposal to attach themselves to the idea in a rhetorical sense.) Though the campaign failed in its immediate goal to freeze the arms race, I argue it shaped the political culture of the 1980s and compelled the leadership of both the United States and the Soviet Union to curtail the arms race.

The freeze campaign hasn’t received much traction in the recent accounts of Reagan’s foreign policy, but it’s impossible to look at American society in the early 1980s and miss the antinuclear fervor. The Reagan administration didn’t miss it, and I don’t think historians should either.

Since I started at UCSB, my interests haven’t so much changed as they’ve grown and continue to expand. I had no exposure to the history of science before coming to UCSB, and as I’ve gone further and further down the rabbit hole of nuclear history, I’ve found the history of science and technology tied in quite nicely with my interests in foreign policy and peace movements.

I’ve also really taken an interest in the history of religion, particularly the relationship between religion and foreign policy as well as the Catholic left (I think here of Dorothy Day and the Catholic Worker Movement, the Berrigan Brothers, and even the 84-year-old nun who broke into the Oakridge, Tennessee, nuclear weapons facility to sabotage it in the name of God). I find these narratives compelling, and I think it’s a subject I’ll be writing more on in the future.

In terms of recent books, I really admired Bradford Martin’s The Other Eighties: A Secret History of America in the Age of Reagan. I would also recommend Francis Gavin’s Nuclear Statecraft: History and Strategy in America’s Atomic Age and Gretchen Heefner’s The Missile Next Door: The Minuteman in the American Heartland.

The history community, the people, and the friendships. I’ve made a lot of good friends at conferences, and, moreover, I’ve found the Cold War and Diplo history community very friendly and welcoming. People have been willing to read over and comment on work in progress, pointed me to archives and fellowships, and shared their own experiences in the profession with me.

To be quite honest, the job listings. But I’ve found both Perspectives and the AHR are both highly readable and usually there’s interesting articles (such as James Grossman’s article in the October 2014 Perspectives) or book reviews.

A number of things, actually—I tend to be a pretty passionate individual! I’ve been playing guitar since I was 14, and although grad school has made it harder to squeeze in time, I try to at least keep my skills up. I listen to a lot of metal and old-school punk bands, and I like going to shows in small venues. I’ve practiced Judo and Muay Thai on and off, and I enjoy watching hockey (though I can’t skate to save my life). I’m very passionate about good beer, and I’ve dabbled in home brewing.