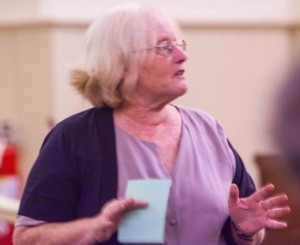 Carolyn Eisenberg is a professor of history at Hofstra University.  She lives in Brooklyn, New York, and has been a member since approximately 1975.

Fields of interest: recent US history 1945-present, American foreign policy in the 20th century, the war on terror in historical perspective, history of the 1960s, American political and social history (all centuries)

At the age of four, when my mother fed me cereal using the names of presidential candidates in the 1948 race. She was for Henry Wallace and my father voted for Truman. I think this had a lifelong effect on my attitude towards cereal and presidential history.

Writing a book on the “national security” policy of Richard Nixon and Henry Kissinger, which links their pursuit of the Vietnam War with their diplomacy towards China and the Soviet Union.

I also coordinate the congressional work of various grassroots peace groups and national organizations in opposition to the ongoing wars, and in support of greater priority for domestic social needs. This work has also included professional historians, in conjunction with Historians Against the War. It has been my experience that when historians engage members of Congress on contemporary issues, they can be amazingly effective. I wish hundreds of colleagues would do this.

They have changed at least five different times. When I graduated Columbia I had written a dissertation in the field of urban history. Over many decades my research and writing has concentrated on American foreign policy. Yet I bring to this work the outlook of a social historian. I’m not simply interested in two dramatic personalities, but in the social forces that enabled them to function in a particular way, as well as the social constraints. A major challenge in my writing is to chronicle the social consequences of decisions reached in the Oval Office.

My greatest interest, which has lasted all these years, is helping students discover the fascination of studying the past and to develop their critical skills while doing so.

I think Juan Cole’s blog, Informed Comment, is invaluable, as well as the many books by Andrew Bacevich. These are two excellent sources for understanding the current “War on Terrorism” and for exploring the historical roots.

There is no “most.” The study of the past is rewarding in countless ways. As a professor, I feel a particular urgency about illuminating the American role in the world, as it has developed over time, so that students can engage as responsible adults in the international issues that confront us all.

I joined the AHA to get a job. It was also the time of the Vietnam War, when the American Historical Association had become a focal point for controversy.

At the 1968 AHA conference in New York City, many younger historians came together to form a Radical Caucus. Because of the location, many Columbia graduate students who had been involved in the spring strike were able to attend. There was tremendous positive energy—a belief that we could change the historical profession for the better. That was partly a matter of content—hoping to broaden the issues studied. But it was also desire to make the profession less elitist and more open to creative pedagogy. Underpinning this was a feeling of friendship and hopefulness about our work together.

Over many decades, I have worked with political activists on issues of peace and social justice. I will continue to do this, for as long as I can make a contribution. An historical sensibility informs all of these endeavors.

One of the most challenging tasks as an historian, teacher, and political activist is how to integrate these commitments. As a professor, I believe my overriding responsibility is to help students develop the skills and confidence to think for themselves. To some extent, that means separating from my own particular views (even if strongly held) to assist them in appreciating diverse perspectives. This is a difficult balancing act, which has received too little attention in discussions of pedagogy. Between conservatives, who complain that left-wing historians are indoctrinating the young, and their opponents who deny there is a problem, there is rare acknowledgement of a genuine dilemma.