A 17th-Century Indian Parrot: Interpreting the Art of the Deccan 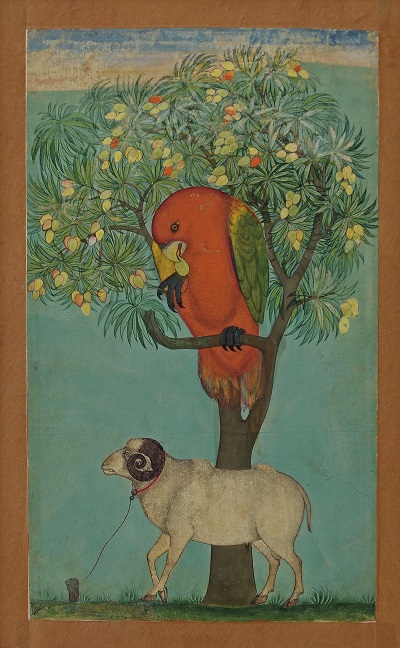 Scholars are beginning to pay attention to an understudied region of India, the Deccan, and its rich cosmopolitan culture. In the 16th, 17th, and 18th centuries, maritime routes connected southern India with Persia, the Arabian Peninsula, and Central Asia. Many merchants who came to India chose to settle there in the pre-modern period, adopting the local languages and cultures, and contributing to the mix of nationalities and races in the area. At the same time, the Deccan was connected to Mughal India-not only do the north and south share Sanskrit and Persian heritage, poets and artists also often circulated between the Deccan and Mughal courts.

The subject of one of the most striking paintings in the Sultans of the Deccan: 1500-1700 Opulence and Fantasy exhibition at the Metropolitan Museum of Art is, of all things, a parrot. Its disproportionate size as it perches on a mango tree and looks down at a tethered ram raises questions for historians, art historians, and curators of southern Indian art. At issue is the painting's supposed inspiration: Netherlandish artist Adriaen Collaert's engraving of a parrot, first identified by Robert Skelton, a renowned scholar of Indian painting. The exhibition catalogue echoes this theory, suggesting that the parrot's unusual proportions are "a result of the artist's reading of the distant sheep in the Collaert print as being on the same plane as the bird and therefore of much smaller size," an explanation attributed to Sheila Canby, the Met's Patti Cadby Circh Curator in Charge of the Department of Islamic Art. But Rajeev Kinra, a Mughal cultural historian at Northwestern University, is not entirely convinced. Kinra suggests that there are too many differences between the two pieces of art to justify this explanation. "If you look at [the engraving] closely, there does not appear to be a single ram," he observes. "And even if there were, none of them are in profile, and none of them are tethered. They're in a jumble. So even on that score, it's hard to make the case that this Indian artist is just copying the sheep from the Collaert print, that he doesn't understand that they're part of a background plane. But even if we were to grant this, it tells us nothing about why the parrot is so huge vis-a-vis the tree. Surely the painter would have known the difference in size between a parrot and the tree he's sitting in!"

What's at stake in this discussion is an entire approach to Indian art. "In a lot of the old orientalist and British colonial art history, the assumption was that Indian artists were simply incapable of visualizing perspective until Europeans came along and taught them how to do so-a kind of art historical version of the old narratives of Western 'progress' mastering, disciplining, and modernizing Asian primitiveness," Kinra explains. "The old civilizational hierarchies implied by such narratives have a lot less purchase now, to be sure, but some of the premises they were built on nevertheless persist, sometimes quite unconsciously, even in otherwise very nuanced scholarship. The painting in question was produced in the mid-17th century, well into the early modern Indo-European encounter. In other words, even if you accept the general premise that Europeans introduced perspective to Indian art, in the case of this individual painting it's a bit of a tough sell." 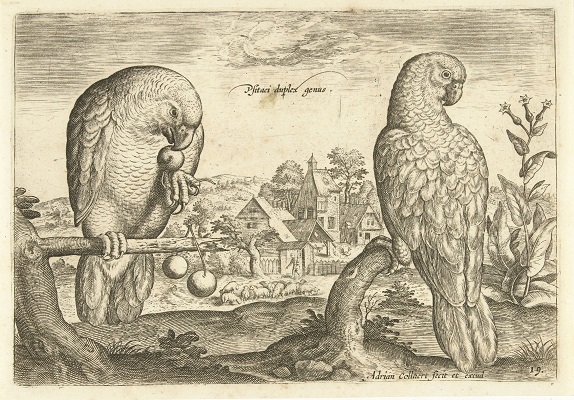 The Symbol of the Parrot

Might there be a literary explanation for the parrot's odd size? Kinra points out that "by the early modern period, parrots had already been a symbol of Indo-Persian storytelling and literary eloquence for centuries, something that would have been known to just about any cultured person in Mughal India or the Deccan Sultanates." He cites a famous story from Rumi's Masnavi about a caged Iranian parrot that sends a message to the parrots of India through his master, a trader, and receives in return a cryptic message about the transience of worldly existence. Other Persian poets like Hafez Shirazi famously associated Indian literati with parrots, as in the well-known verse: "All the Indian parrots will be crunching the sugar / of this Persian candy [i.e., Hafez's own verse] as they repeat it all the way to Bengal." And Indian Persian poet Amir Khusrau, who proudly proclaimed himself the "parrot of India" (tuti-yi hind), wrote, "Since I am the parrot of Hind, if you want to speak to me properly / Speak in Hindawi, so that I may answer well."

Sanskrit fables associated with parrots were regularly compiled and translated as part of the Perso-Arabic traditions of adab, or moral wisdom, most notably the famed Tuti-nama (Book of the Parrot), in which a domestic parrot regales his mistress nightly with entertaining tales to prevent her from leaving the house for romantic dalliances while her husband, a trader, is traveling. "A sort of Scheherazade thing in reverse," Kinra muses. "But the main point," he adds, "is that the parrot loomed large in the medieval and early modern Indo-Persian literary imagination as a symbol of Indian lore, and Indian storytelling, and it's certainly possible that the painting alludes to that tradition."

Another possibility is that the painting contains an astrological, rather than literary, reference. "Besides being storytellers," Kinra explains, "parrots were also sometimes thought to have a certain mystical insight and power to predict the future. They were thus associated in the popular imagination with astrological prognostication, especially in certain parts of the Deccan and southern India, where even today one sometimes sees so-called parrot astrologers by the roadside. The astrologer spreads his tarot cards out on the ground before the customer, and then lets a trained parrot out of a cage, who dutifully walks over, picks up the card to be interpreted, and goes back to his cage."

Lyricism and Scale vs. the Art of Collage

Yael Rice, art historian at Amherst College, has a different interpretation of the painting. While she agrees that the Indian parrot is a copy of the Netherlandish one, she sees a different reason for the size of the former. She argues that a "unique playing with scale" is one of the subthemes tying the objects in the Met exhibition together. "These court and commercial artists enjoyed expanding and contracting [images] while working in miniature, and this painting is exemplary of that," she said in a phone interview. She also pointed out that other art historians might see this painting as "evocative of a lyrical mood that informs much of the cultural production of the region during this period." The idea that the painting is fantastical is not the explanation she finds most convincing. She suggests that Deccani artists were in fact far less concerned with using painting to produce an illusion of space and depth than their contemporaries in Europe. From her point of view, one explanation for the parrot's size lies in the painter's "use of different kinds of source materials, including European prints." She suggested that the artist's transfer method may explain its size, since "the parrot as depicted in the Deccani painting roughly corresponds to the size of the parrot in the engraving. This practice of taking pieces or parts from different artistic materials and then collaging them together was common to the Mughal court and the broader Persianate sphere. 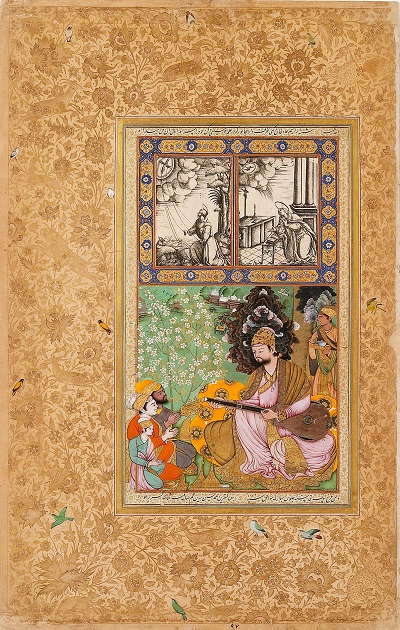 "In one way," she continues, "the artist is portraying a visual experience by reproducing an excerpted parrot from an engraving. His painting reveals the variety of different sources that he stitched together to make this new composition. In other words, the artist is depicting the world as a self-evident fabrication, a visual field that is constructed from discrete and, at least to our eyes, disjunctive parts."

Although we cannot know how the original audience interpreted these works, Rice believes that "they did not necessarily expect the painting to be a window onto the world. Instead, their enjoyment derived, in part, from recognizing how the artist manipulated and brought together different artistic traditions." An example of this can be seen in the painting Sultan Ibrahim 'Adil Shah II Playing the Tambur, above which two European engravings are placed.

The Indian painting of the parrot was most probably made for an album that would have taken the format of a codex (stitched book). "The vast majority of [the paintings in the exhibition] were made for and or were compiled in albums," Rice said. "In the Mughal context, they draw from a longer tradition of album production from the Timurid court, but these albums brought together a variety of materials, not just paintings but also drawings, calligraphies, and sometimes European prints. Albums often bring together materials from many different periods and different places. Unlike a manuscript of a poetic text, like the Khamsa of Nizami, the album doesn't really have a clear narrative arc. There isn't a main text. Rather, albums are meta-reflective books that show the owner or patron what he or she possesses. [The albums] construct a history of artistic practice and tradition."

The puzzle of the parrot remains. Was it copied from Collaert's engraving? Why is it so big in relation to the mango tree? Why is it bigger than the ram? What does the painting represent? There is not enough scholarship yet to base answers on. However, "There's a kind of renaissance of Deccan scholarship that's happening right now, especially as we start to learn more and more about the ways that such art, and the artists that produced it, circulated in the subcontinent in the early modern period," Kinra stated. The "grandeur of the Mughal empire" fascinated scholars for centuries, and "in the process people sometimes forgot that there was a whole lot happening in the Deccan as well," Kinra said. In the past, linguistic barriers hampered scholarship on the arts and literary cultures of the Deccan; scholars who were trained in Persian were usually also trained in the languages of northern India such as Hindi and Urdu, but not the Tamil, Marathi, or Telegu spoken in southern India. But "nowadays scholars are doing more to transcend those kinds of barriers through collaboration than they were, say, 25 or 30 years ago-and in the process, the Deccan's role in the extraordinary synthesis of Indic and Persianate literary and artistic sensibilities during this period is getting a lot more attention, and a lot of amazing scholarship is being produced."