The William and Mary Quarterly recently announced the winners of three of its prizes, the Douglass Adair Memorial Award, the Lester J. Cappon Award, and the Richard L. Morton Award. These awards recognize a range of the best articles published in the journal over time. 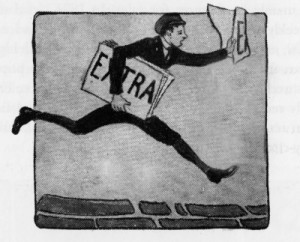 We are happy to see two AHA members* among the four recipients. Below is a summary of the awardees and the titles of their articles.

Katherine Grandjean* is the 2014 recipient of the Douglass Adair Memorial Award, given biennially to the best article published in the William and Mary Quarterly during the preceding six years. An assistant professor of history at Wellesley College, Grandjean received the award for her article, “New World Tempests: Environment, Scarcity, and the Coming of the Pequot War.” Grandjean also earned a Michael Kraus Research Grant from the AHA in 2013.

Cary Carson and Robert Michael Morrissey are co-recipients of the 2013 Lester J. Cappon Award, given to the best article published in the Quarterly each year. Carson, retired vice president of the Research Division at the Colonial Williamsburg Foundation, earned the award for his article “Banqueting Houses and the ‘Need of Society’ among Slave-Owning Planters in the Chesapeake Colonies,” published in the October 2013 issue of the journal. Morrissey, assistant professor at the University of Illinois, won for “Kaskaskia Social Networks: Kinship and Assimilation in the French-Illinois Borderlands, 1695-1735,” published in the January 2013 issue.

Cameron B. Strang* received the 2013 Richard L. Morton Award, which recognizes an article published in the Quarterly by a graduate student. Strang won for his article, “Indian Storytelling, Scientific Knowledge, and Power in the Florida Borderlands,” published in the October 2013 issue. Currently the Margaret Henry Dabney Penick Resident Scholar at the Smithsonian Institute, Strang will begin an appointment as an assistant professor at the University of Nevada, Reno, in the fall.