It’s time to take your mail off of vacation hold; Perspectives on History is back from summer hiatus.

To be honest, the online version of Perspectives somehow managed to avoid the hiatus altogether this summer. We were the lucky beneficiaries of a number of very diligent writers who contributed to five AHA roundtables—two on the historic Supreme Court decisions, one on web etiquette (and the lack thereof), a midsummer forum on the geographic range of historians (and the lack thereof), and a final roundtable on President Obama’s college affordability plan (or the lack thereof, according to some contributors). If you missed any of these, they are available online. 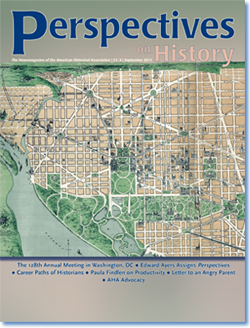 The cover image of the print edition is a detail from a 1892 map attributed to James T. Dubois entitled, “The Altograph of Washington City, or, Stranger’s Guide.

One of the summer’s most popular new features was a new direction for Perspectives—the What I Do video series. In the first installment, Lincoln Bramwell, historian for the US Forest Service, describes his unusual career path from firefighter to historian. This month, Perspectives is continuing the series with a talk with John A. Lawrence, history PhD and former chief of staff to Nancy Pelosi. You can also read Lawrence’s “Career Paths” essay, in print and online now (member gate).

Last fall, while you were reading Perspectives, Edward Ayers was assigning it to his undergraduates. In the September issue, we learn what the historical profession looks like through the eyes of his students, and then they give us some homework. Find out what happened in this innovative class here (member gate).

Last year, Perspectives published a piece by Sara Maza on the bygone era of “big books.” The piece inspired Paula Findlen to reflect on her own “failure” (her word) as a book producer, and prompted her to ask “What Counts?” Her essay, on the many avenues for publishing history, is available here (member gate).

Watch AHA Today for more announcements and early ungating of Perspectives articles, and watch your mailbox for an early appearance of the magazine. We are trying something new with our schedule this fall—members should get their issues about a week earlier than usual.