History's Relevance: The DOMA Opinion and the Historians' Amicus Brief 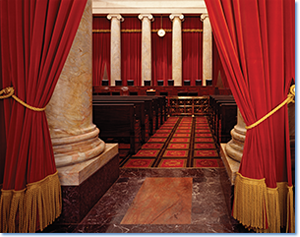 In February 2013 the AHA joined a group of historians in signing an amicus brief in US v. Windsor, a case before the US Supreme Court challenging the Defense of Marriage Act (DOMA). In July, after the court handed down its opinion, Perspectives on History published online a few responses by historians, two of whom had signed onto the brief. In this response, Nancy F. Cott takes a close look at the court's ruling to see if the historians' influence can be discerned.

Justice Anthony Kennedy came through. As many people hoped, he gathered a majority of the court to strike down the Defense of Marriage Act as a contravention of constitutional guarantees of equal liberty. The opinion came 10 years to the day after his opinion in Lawrence v. Texas had used similar constitutional reasoning to strike down Texas's law criminalizing sodomy. In both opinions, Kennedy's understanding of the relevant history mattered a great deal. In both cases, historians had submitted amicus briefs. The influence of the historians' brief in Lawrence was indisputable: Justice Kennedy echoed its portrayal of the history of laws against sodomy in order to dispute and reject the historical assumptions embedded inBowers v. Hardwick (1986), the precedent that Lawrence overturned.

The influence of the historians' brief in Edith Windsor's case against DOMA (signed by the AHA along with 23 individual historians of the family and the law, including me) may have figured somewhat, or may have been nil: it's impossible to know. Ours was one among more than 70 amicus briefs submitted on both sides of the case (many by other professional groupings, such as constitutional lawyers, sociologists, psychologists, US senators, etc.) How much-if any-material from these briefs entered the justices' deliberations is unclear.

I note, nonetheless, that Kennedy's holding regarding the substance of the case put "history and tradition" first. The suitability of Congress's action in creating DOMA could not be assessed, he wrote, without "discussing the historical and traditional extent of state power and authority over marriage." That is exactly the tack of the historians' brief. In line with our brief's emphasis, Kennedy stressed that, since the founding of the United States, the "regulation of domestic relations" had been reserved to the states, and that the federal government had in the past recognized and accepted state definitions of marriage. True, Congress has often validly passed laws that bear on discrete marital rights or privileges under federal law, but Kennedy, in line with the historians' brief, distinguished the approach of DOMA, which blanketed all states and all potential privileges of same-sex couples at once. DOMA was an "unusual deviation" from the foregoing standard relation between the federal government and the states' authority over marriage, Kennedy wrote. Similarly, the historians' brief, calling DOMA "historically unprecedented," and "a radical departure from settled federal practice," said, "No previous congressional action is comparable to Congress's refusal [in DOMA] to recognize, for all federal purposes, the marital status of a whole class of persons.

"Kennedy surprised me with his eloquent and welcome emphasis on the state's (in this case New York's) intention to "give protection and dignity" to a couple by admitting them to the institution of marriage. Reflecting on the steps New York took to authorize "lawful marriage" for same-sex couples, Kennedy stressed that the state made "a far-reaching legal acknowledgment of the intimate relationship between two people" and deemed it "worthy of dignity in the community equal with other marriages." Kennedy used this premise to undergird his strong words about DOMA's "purpose and effect to disparage and to injure" couples whom the state meant "to protect in personhood and dignity." The historians' amicus brief did not raise the issue of animus in the formulation of DOMA, or its damaging effects-except in observing mildly, "In historical perspective, DOMA appears as an attempt by Congress to single out particular state-licensed marriages for disfavored treatment." (Our intent was only "to provide accurate historical perspective" on state and federal purposes in marriage and authority over marital status.) Kennedy far more sharply judged that the purpose and effect of DOMA were to render state-sanctioned marriages of same-sex couples "unequal"-and to make them functionally "unstable" and "second-tier," because they were "unworthy of federal recognition." No doubt his words will be quoted in the foreseeable battles ahead to secure same-sex couples' equal marriage rights in additional states.