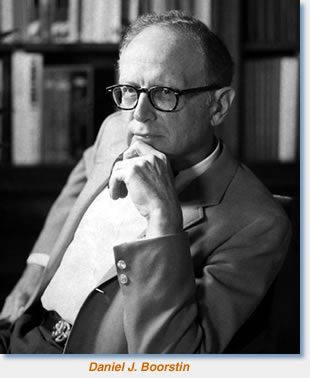 Daniel J. Boorstin, a prize-winning author, social historian, and the Librarian of Congress for 12 years, died in Washington, D.C., on February 28, 2004. The cause was pneumonia. He was 89 years old.

Librarian of Congress James H. Billington hosted a public memorial service for Boorstin at the Library of Congress on April 27. The presenters, each of whom spoke briefly to a different phase of Boorstin's career, included Senator Ted Stevens; former Congressman Vic Fazio; historian and longtime colleague Jaroslav Pelikan; Peter Marzio, director of the Museum of Fine Arts in Houston and a Boorstin protégé; friend and neighbor Jim Lehrer, executive editor and anchor of public television's The NewsHour; Robert Loomis, vice president and executive editor of Random House, and Boorstin's editor for 35 years; two granddaughters; and this writer, who has headed the Center for the Book in the Library of Congress since Boorstin established it in 1977. The service, including a film clip from an interview Lehrer conducted with Boorstin in 1987, may be seen as a cybercast from the Library of Congress at www.loc.gov/locvideo/boorstin.

Describing his predecessor's term as Librarian of Congress (1975–87), Billington called Boorstin "a key figure—along with his friends Dillon Ripley and Roger Stevens—in the cultural coming of age of our nation's capital, and a matchless chronicler of the uniqueness, the innovative spirit, and the everyday practicality of our shared American experience."

A man of unquenchable curiosity and great energy, Boorstin wrote more than 20 books; at last count, his work has been published in 32 languages. He was a clear and graceful writer who proudly characterized himself as an "amateur," often pointing out that he was not a professionally trained historian. He also was an incisive thinker who was not afraid to generalize. In one of his most influential and frequently quoted books, The Image: A Guide to Pseudo-Events in America (1964), he argued that the mass media invent events and create illusions that distort the reality of national experience.

Prior to his nomination in 1975 by President Gerald R. Ford to become Librarian of Congress, Boorstin served as director (1969–73) and senior historian (1973–75) of the Smithsonian Institution's Museum of History and Technology, which is now called the National Museum of American History, Behring Center. He arrived at the Smithsonian Institution from his position as Preston and Sterling Morton Distinguished Service Professor of American History at the University of Chicago, where he taught for 25 years. His love of debate and agile mind inspired students he taught not only at the University of Chicago but also around the world, including the University of Rome, the University of Kyoto, the Sorbonne in Paris, Trinity College in Cambridge, and the University of Geneva.
Boorstin favored bow ties—and unconventional ideas and approaches. At the Smithsonian, Peter Marzio noted, the former professor-turned-museum-director enjoyed seeing the objects "which represented the ideas and historic developments he had written about. . . for him, this was the stuff of history!" Yet there was a twist. At the University of Chicago he had "challenged professors and students by citing objects and tangible things as essential to understanding the past." At the Smithsonian, he did the reverse: "he challenged curators, directors, and other material culture specialists with ideas. He repeated a simple question—but what did the pots and pans mean?"

For 12 years, until he retired in 1987 to spend more time writing, Boorstin also brought new intellectual energy to the Library of Congress. Viewing the library as "a multimedia encyclopedia" that took all knowledge for its province and a whole nation for its audience, he opened up the institution to the public, to scholars, and to new constituencies. Congress approved creation of the American Folklife Center in 1976 and a Center for the Book to promote books and reading in 1977. Through his leadership, in 1979 the library and the Kennedy Center opened a Performing Arts Library at the Kennedy Center. The next year he established a Council of Scholars, a new link between the library and the world of scholarship. An innovative thinker, he made the Center for the Book and the Council of Scholars public-private partnerships, long before such partnerships became popular.

He paid attention to the library's Capitol Hill buildings. The library's move from 1980 to 1982 into the new James Madison Memorial Building was a highlight of his administration. To make the public aware of the library's unparalleled motion picture collections, in 1983 he opened the Mary Pickford Theater in the Madison Building. With help from his friend Architect of the Capitol George White, in 1984 he persuaded Congress to appropriate $81.5 million for the restoration of the library's two oldest structures, the Jefferson (1897) and Adams (1938) buildings. Never afraid of controversy, in 1986 Boorstin directly confronted Congress about its plans to drastically cut the library's budget. His eloquent plea, which earned him the sobriquet of "an intellectual Paul Revere," resulted in the restoration of a substantial portion of the sum that had been cut. During his administration, the library's annual appropriation increased from $116 million to $250 million.

A natural showman whose wit and wry sense of humor was especially appreciated by the press, he rarely missed an opportunity to introduce the library to as wide an audience as possible. For example, he opened the Jefferson's giant bronze doors to the public for the first time in many years, installed picnic tables on the library's plazas, and held a press conference to describe a discovery he made in a wall safe in the librarian's office: the contents of Lincoln's pockets the night he was assassinated.

In 1975 at his swearing-in ceremony in the library's Great Hall, Boorstin emphasized his love of books: "The computer can help us find what we know is there. But the book remains our symbol and our resource for the unimagined question and the unwelcome answer." A lifelong lover and user of books, he was disturbed by how many educated people stopped reading when they left formal schooling behind. New motivation was needed, especially for the "aliterates," a term he coined to describe people who could read, but for various reasons did not. From its creation in 1977, the Center for the Book's many national and state projects have focused on bringing "aliterates" back to the world of books and reading.

The same year he met his future wife, writer and editor Ruth Frankel. He was teaching legal history at Harvard in 1941 when his first book, The Mysterious Science of the Law, was published; in the preface, he notes that "the encouragement of Miss Ruth Frankel has been of the greatest help." They were married in April 1941, and she became an active collaborator and the principal editor for all of his books. Many of his books are dedicated to her, including each volume in his two trilogies. She is the co-author of his widely used high school textbook, A Landmark History of the American People (1987).

The three Boorstin sons, Paul, Jon, and David, all make their living through literary activities or in the performing arts. All were present when their father died peacefully on February 28. His survivors include six grandchildren.