An Etching for the AHA 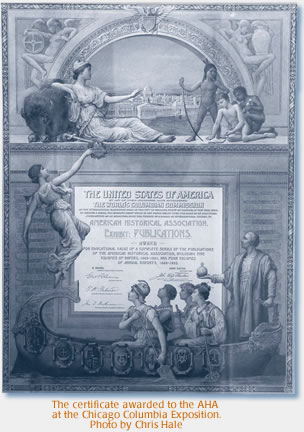 It is easy to forget just how long the Association has been around and how intimately woven it has been into our national story. Staff members were reminded of that hoary past when, during the re-painting of the AHA offices in February 2004, two historical treasures were found.

One of our discoveries was the amazing engraved certificate recognizing the AHA for the "educational value" of its exhibit of five volumes of AHA papers (1885–1891) and annual reports for the years 1889 through 1892 at the 1893 World’s Columbian Exposition in Chicago, found taped to a wall of a small, little-used office. The certificate (shown here and on the cover) is large, measuring 24.5 inches high and 19 inches wide, and shows Columbus with the "races of the world" underneath Columbia pointing the way to the White City of the fair. The second treasure was a bronze medal (shown in the photograph on this page), which was found at the bottom of a filing cabinet. It depicts Columbus stepping onto land on the front, and engraved on the back is "In commemoration of the four hundredth anniversary of the landing of Columbus." It is about 3 inches in diameter and 0.25 inches thick. Staff wondered about the relationship between the two pieces and thought our members would be interested in what was learned.

In 1893, as part of the World Auxiliary Congress, a series of scholarly meetings held in conjunction with the Columbian Exposition, the American Historical Association held its ninth annual meeting July 11–13 in Chicago. The exposition was considered so important that, in fact, the AHA postponed the meeting it would normally have held in December 1892 to the summer of the next year. The World Auxiliary Congress was intended to provide a scholarly contrast to the popular pleasures of the fair’s "Midway Plaisance," where visitors rode the Ferris wheel or could see the "dance of the veils" being performed. The congress brought together prominent men and women of the time to discuss progress and to display the "wonderful achievements of the new age, in science, literature, education, government, jurisprudence, morals, charity, religion, and other departments of human activity."1 The Auxiliary Congress met in two of the fair’s major buildings, the Columbian and Washington Halls, as well as in the Art Institute of Chicago. The congress officially opened in May, simultaneously with the fair, and each month was dedicated to a theme. The themes for July 1893 were music, literature, and education. This division included "history, philology, authors, libraries, folk-lore, and copyright."2

The entire meeting of the AHA took place at the Art Institute of Chicago and all morning sessions were to be "brief [so] members can have abundant time each day for visiting the Columbian Exposition."3 At the time of the meeting, the AHA had 673 members, with 106 life members. One could join for an annual fee of $3, or become a life member by making a one-time payment of $50. According to the report of the secretary of the AHA, Herbert Baxter Adams, this ninth meeting was quite successful, with 33 papers given (of which 23 were read at the meeting). These papers included Frederick Jackson Turner’s now famous groundbreaking paper entitled "The Significance of the Frontier in American History," which was read on the evening of July 12; a paper by J. Franklin Jameson on standing committees in American legislative bodies; and Ellen Hardin Walworth’s paper on "The Value of National Archives to a Nation’s Life and Progress." AHA President James B. Angell’s "inaugural address" was entitled "The Inadequate Recognition of Diplomatists by Historians" and was delivered on the morning of July 11.

During the 179 days of the fair, Hubert H. Bancroft reports that 27,529,400 persons attended the fair, the largest attendance for a world’s fair up to that date. In additional there were 65,422 individual exhibitors.4 As was the custom, exhibitors at the fair were given awards; however this fair’s awards were non-competitive, "granted upon specific points of excellence or advancement formulated in words" rather than for exhibit design. At the Chicago fair, 36 percent of exhibitors won an award, or 21,000 exhibitors receiving 23,757 awards. Bancroft comments that this is far less than at pervious world’s fairs: Vienna, in 1873, awarded 26,000 among 42,000 exhibitors (62 percent ), 42 percent won medals at Philadelphia in 1876, and 55 percent were honored at Paris in 1889.5

Eight hundred fifty-two judges were divided into committees, which then judged divisions and departments. The awards highlighted "the development of the resources of the United States and the progress of the civilization in the New World, as compared with all participating nations."6 Each winner received the diploma of honor (the certificate) and a bronze medal, both prepared under the direction of the United States Secretary of the Treasury and designed by William Low, who was also the designer for most of the fresco work at the Exposition. The diploma was meant as a certificate of identification and the medal as a memento of success. To avoid complaints about favoritism, all the bronze medals were alike except for the engraving of the name of the exhibitor.

Currently, the diploma of honor, properly preserved and framed, hangs in the entryway of the AHA offices. The medal will be contained in a glass box, to be displayed in the Beveridge Room. Readers are welcome to drop by and see these rediscovered treasures of the Association’s history.

—Miriam Hauss is marketing and development manager and special projects coordinator at the AHA.

1. As quoted in Hubert Howe Bancroft’s The Book of the Fair, chapter five, "Exposition Management, Congress, Auxiliary, and Finances" (Chicago, San Francisco: The Bancroft Company, 1893). http://columbus.gl.iit.edu/bookfair/ch5.html. Viewed August 5, 2004. In researching the World’s Congress Auxiliary, I discovered this site, which has the entire book of the World’s Fair available on the Internet as part of the Paul V. Galvin Library Digital History Collection-Illinois Institute of Technology. Hubert H. Bancroft, the famous Western historian, was also a member of the AHA, having joined by 1884 and becoming a life member by 1887.