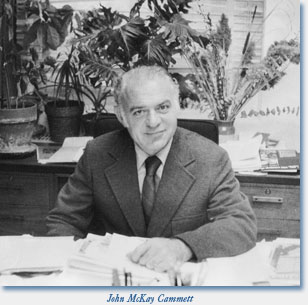 Our beloved colleague, mentor, and friend, John McKay Cammett, died at home on July 30, 2008. Born July 8, 1927, U.S. Navy veteran (1945–46), John Cammett, began life as an auto worker and union organizer. After World War II, he attended Wayne State (BA 1949) and became a devoted scholar and researcher. John Cammett was a brilliant historian, for many years chair of the John Jay College of Criminal Justice, CUNY, Department of History. As dean of faculty and provost at John Jay, he, along with Presidents Don Riddle and Gerald Lynch, invented a program to integrate criminal justice with liberal arts studies.

Internationally known as the pioneering scholar of Antonio Gramsci, he began his work on Italy from the Renaissance to the present at Columbia University (PhD 1959). On a research trip to Rome, he discovered the significance and impact of Antonio Gramsci on the Italian communist movement, which became the most significant feature of his life’s work. His awardwinning dissertation (the 1960 prize for the best unpublished work of the year, awarded by the Society for Italian Historical Studies), was subsequently published as Antonio Gramsci and the Origins of Italian Communism (Stanford University Press, 1967). In his introduction to the Italian edition, Domenico Zucaro noted that Cammett’s study was remarkable not only as the first serious work in English about Gramsci, but also because Cammett introduced “many new elements into the Gramscian debate,” and precisely analyzed “that continuous line between thought and action” that defined Gramsci’s contributions to communist ideology and experience.

Subsequently, Cammett became universally known within the world of Gramsci studies for his Bibliografia Gramsciana, which includes all writings by and about Gramsci. In this project, which has been ongoing for over 20 years, Cammett brought together scholars, translators, and publishers from all over the world, including Latin America, the Middle East, Asia, and South Africa. The online bibliography eventually comprised over 17,000 titles in 40 languages. An indispensable reference, which resulted from the passion, perseverance, and vision of a great scholar, Cammett insured that Gramsci became the most widely known Italian thinker in the modern world.

He was the author of dozens of articles, papers, and essays, such as “The Impact of Eurocommunism on Americans,” “Communist Women and the Fascist Experience,” “The Historical Role of Italian Intellectuals,” “Communist Theories of Fascism,” “The Intellectual and the Working Class,” “Italian Americans and the Howard Beach Tragedy,” “Idealist Influences on Historical Materialism,” and “The Police in Italy” (with Mary Gibson). He was co-editor with George Fischer, et al., The Revival of American Socialism (Oxford University Press, 1971), and co-editor with Sheppard Clough, et al., The European Past (Macmillan, 1970), and other books. An indefatigable athlete, John Cammett biked to and from work and played tennis almost daily. A public citizen of profound commitment and valour, he was a member of the AHA since 1956, the Society for Italian Historical Studies, the American Italian Historical Association, and Columbia University Seminars on War and Peace, Modern Italian History, and the History of the Working Class.

A stirring lecturer throughout the U.S. and internationally, Cammett won several academic honors, including Fulbright and National Endowment for the Humanities Fellowships. In addition to John Jay, over time he taught at the CUNY Graduate Center, Rutgers University, Hunter College, New York University, and Columbia University.
A radical activist whose entire life was dedicated to world peace and economic and social justice, John Cammett was always an inspiration and a warm generous friend. We send our condolences to his wife Sandi Cooper; his daughters Lisa, Ann (Marcia Gallo), and Melani (Angelo Manioudakis); grandchildren, Mena Cammett and Alex and Lena Manioudakis; and countless friends and colleagues.