Scholar of the Gilded Age and of Southern History 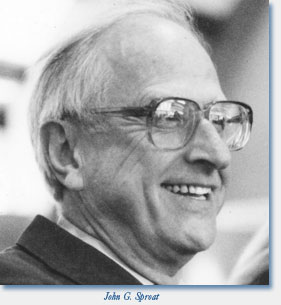 John G. “Jack” Sproat, a distinguished American historian and classroom teacher, died on March 14, 2008, after a major stroke at the age of 86. Until his recent bout with cardiovascular disease, his youthful appearance, unquenchable and irrepressible spirit, and good humor always belied his age.

Born on April 1, 1921, in Los Angeles, he attended public school in San Jose, and after graduating high school he served during World War II with the Thirteenth Air Force in the South Pacific. He married Jeanne Mildred Nichols upon his discharge from military service, and they settled in San José, where Sproat entered the insurance business. His only child, Barbara Jeanne Sproat, was born in 1948, while Sproat was completing his BA at San José State College. He chose to enter the graduate program at the University of California at Berkeley, working under the supervision of Kenneth M. Stampp. That was when Jack Sproat and I met.

After his first marriage ended in divorce, he enjoyed a 40-year marriage to Ruth Christensen Sproat. They shared travel experiences in various parts of the world, some of them professional. At the same time, Ruth Sproat left her distinctive mark in a long-working association with the Public Broadcasting System affiliate in Columbia. Jack Sproat also served as a trustee and president of the boards of the Columbia Museum of Art and the Historic Columbia Foundation.

Sproat communicated effectively in the classroom and to a public audience. He wrote with clarity, grace, and fluidity. In his teaching, as in his writing, he made a commitment to the most demanding standards of historical criticism and literary craftsmanship. Forty years after its publication, The Best Men remains the definitive treatment of liberal reformers in the Gilded Age; Jack Sproat brought their history to life and infused it with meaning. He revealed the reformers in all of their complexity, including the ambiguities, paradoxes, and contradictions that characterized them and often deeply compromised their professed “liberalism.” Sproat told us much about the limited nature of reform movements, the difficulty of maintaining consistent standards of moral conduct in corporate America. In the essay he wrote for the volume dedicated to his mentor Kenneth Stampp, Sproat addressed the importance of South Carolina in the civil rights era, not only as a state with a long history of racial intransigence, terrorism, and violence, but also a place where a combination of circumstance, forces, and influences in the 1950s and 1960s enabled it to avoid the confrontations acted out in Alabama, Georgia, and Mississippi. In doing so, Sproat underscored a theme he addressed as well in his courses—the genius of American society for defusing, assimilating, and making palatable potentially explosive and radical movements.

In his warmth and compassion, in his scholarship, in his respect for the complexity and integrity of the past, in his deep concern for how we communicate history, Jack Sproat made his impact on the classroom and the profession. The best historian deepens sensibilities, demythologizes the past, makes a difference in how people conceptualize, think about, and feel their past. Jack Sproat made such a difference. His passing is part of a generational loss. His presence and influence were important to the continuing vitality of this nation and our profession. He not only radiated compassion, but also a willingness to disturb the peace. He fought for his country abroad in World War II, and he fought for his country with equal conviction after the war, a patriot always ready to defend his country against a government that threatens to undermine its most cherished liberties. What was once said of our heroes Mort Sahl and Lenny Bruce, whom we saw together several times in Berkeley and San Francisco, could be said as well for Jack, in and out of the classroom: “a renegade in Reader’s Digest America, a human torpedo on a suicide run against encrusted authority, pious hypocrisy, and Puritan taboo.” That was vintage Jack Sproat, and he is already missed.