Violence in Political History: The Challenges of Teaching about the Politics of Power and Resistance 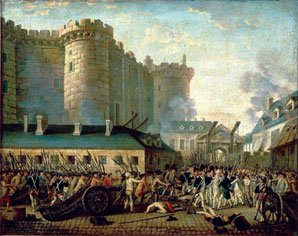 Take any entry level history course and the narrative is essentially the same: so and so conquered so and so, or so and so succeeded so and so, and so on. Students often complain that history is taught as a litany of battles, wars, campaigns, and struggles over power. Scholars and educators prepare timelines based on the rise and fall of kingdoms and civilizations. Most major benchmarks in history revolve around the markers of violent events—such as the American, Haitian, French, or Russian Revolution, the Revolt of 1857 in India, or World War II. Most American survey courses end or begin with the Civil War and its aftermath. Even when we teach a Western Civilization course, we start with Mesopotamia and end with Martin Luther's Reformation and the ushering in of the Thirty Years' War, one of the most devastating contests in European history. The distinguished historian Manning Marable has often presented history as a site of contestation, as struggles over power that often culminated in violence.

There have been few major transitions in political history that have not involved violence. Riots, rebellions, and revolutions all contain (and perhaps even require) elements of political violence. Scholarly discourse on political history must, therefore, acknowledge the politics of violence. As a political language, violence has expressed and altered outcomes in intense political eras, particularly among oppressed and marginalized people. It is important that educators understand the power behind political violence and the ideology behind the justification. My goal has been to explore examples of the successes and failures of political violence in history. My hope is that students will, in the process, have a greater understanding of class and political struggles as well as global activism. I contend that the best practices for this are three fold.

First, educators can best communicate the importance of political violence in world history by understanding and discussing the difference between "violence" and "force." While the two terms seem interchangeable, it is useful and instructive to show the distinctions. For example, several African Americans sitting at a segregated lunch counter in the South in 1960 were able to exert enormous and persuasive force on the public mind, without using violence (as the terms are normally understood). Nonviolent anticolonial movements in India, which were based on "truth-force" as envisaged by Mohandas Gandhi, and the forceful but predominantly nonviolent civil rights movement in the United States led by Martin Luther King Jr., are examples from the past that illustrate this distinction. The more recent, essentially nonviolent regime change effected in Egypt by ordinary, unarmed people is a similar case from contemporary history. On the other hand, the many civil wars that have racked the countries in Africa in the past half century or so, or the urban rioting (mostly of young immigrants) that afflicted the cities of Europe in the same period are, clearly, manifestations of violence intended to secure social, political, and economic changes as well as freedom from discrimination and disenfranchisement. That is, whether manifested as nonviolent force or actual violence, the two political strategies essentially have the same goals.

Second, in posing the question of how violence should be understood, it is most important to view violence, politically speaking, as symptomatic. In my classroom, I encourage my students to discuss the implications of violence as a political language in their studies. In teaching major historical narratives such as those about the Haitian Revolution or the historical evolution of Apartheid in South Africa, I want my students to understand how oppressed peoples have resorted to the methods of violence to secure political change. I point out that violence as a political language can be manifested not only in acts, but in speeches, writings, and even in the arts. Moreover, discussing political violence in history reveals both the capacity and, in many ways, its incapacity to produce the desired change. I also pose the question: "If violence can ever be made legitimate, what makes it so?" In other words, if we can ask, "why violence?" we must also be willing to ask "why not?" Even Mohandas Gandhi stated, "It is better to be violent, if there is violence in our hearts, than to put on the cloak of nonviolence to cover impotence." Discussion of violence in political history thus compels us to ask as well the harder questions of motive and morality.

Considerations of such questions leads us to the third issue to be examined in the classroom: whether in some contexts actual political violence can carry a sense of legitimacy. During the French Revolution, for example, Maximilien Robespierre declared that a revolution is essentially virtue combined with terror, and further explained that notion by adding, "virtue, without which terror is destructive; terror, without which virtue is impotent."1 To dismiss the Jacobins as guillotine-happy, without analyzing the politics of violence, is to misunderstand the French Revolution completely. But "virtue" is based on values, and we are compelled then to discuss what we mean by "value" and which values we are referring to. Is not politics primarily a particular set of values? Political violence committed by oppressed or marginalized people can thus be seen as an expression of a deep, unmet need.

It is often because we fail to examine the political and historical context for such violent actions, that we attach pejorative labels to the actors as "rebellious slaves" or "urban thugs," denying, in the process, their humanity and the validity of their political demands. These labels are often ideological and tend to perpetuate stereotyping narratives of discontented masses (seen from racial, ethnic, or nationalistic perspectives).2 The underlying reasons for the unrest and violence are not subjected to critique. And, because most students tend to deal only in binaries, seeing debate as black or white, right or wrong, and good or bad, educators can rarely take students into the "gray" areas of politics that are often the central determinants of the majority of world issues. When it comes to political violence, I encourage my students to see the world through "gray-colored glasses."

Educators can be reluctant to teach about the utility and virtue of violence, even if it is in the context of political history. It is easier to have the students see a clip from the film Gandhi or have them listen to the speeches of Martin Luther King Jr., than is it to explain the historical significance of Malcolm X announcing "You don't have a peaceful revolution. You don't have a turn-the-other-cheek revolution. There's no such thing as a nonviolent revolution .… You don't do any singing, you're too busy swinging."3 Yet, if we present the speeches of Malcolm X in the classroom purely as texts calling for inappropriate political action involving violence, and not for historically necessary "force" that in his opinion has to be used to produce change, we lose sight of the larger issues. That is, as educators engaged in communicating to students the various dimensions of political history, we have to discuss not only such violent movements as the French Revolution, the Haitian Revolution or the American Revolution, but also the many other historical struggles that pushed for liberty and equality.

I encourage students in my American history and World Civilizations courses to be analytical. I want to them to argue, challenge, question, and even defend the utility and justice of the varying episodes we label riots or rebellions. I want them to critically weigh the weakness and merits of contested depictions of such events. When we examine the role of violence in history, we simultaneously examine the terms of power relations, how power is secured, how power is perpetuated, and how power is controlled. We also discover that violence has often been used to prevent change and suppress opposition, as seen in the histories of Atlantic world slavery or of European colonialism. To enable students to have a comprehensive understanding of historical processes and events, scholars in the field of political history in particular must be willing to engage the topic of violence that for many of us is uncomfortably contentious or seems downright political. Yet, how can we discuss John Brown's raid on Harper's Ferry, for instance, without examining the utility of violence? How can we analyze the riots in Watts, without considering violence as a part of the political language of the oppressed? How can educators teach the history of the Morant Bay rebellion in Jamaica (which is credited for having precipitated British emancipation in the West Indies) without engaging the role of violence? How can we remember Martin Luther King Jr.'s "I Have a Dream" speech and not remember his explanation that "A riot is the language of the unheard?"4

The issues and concerns educators face in their classrooms in regard to inequality and power relations are not new. As educators it is our responsibility to be informed on the history of our past to interpret best practices for its future. If all power is political and violence is its language, then, the field of political history likely requires a reappraisal that acknowledges force as legitimate fair play.

1. M. Robespierre, Report upon the Principles of Political Morality Which Are to Form the Basis of the Administration of the Interior Concerns of the Republic (Philadelphia, 1794).

2. For an extended discussion of this concept with regard to African Americans, see Kellie Carter Jackson, "Force and Freedom: Black Abolitionists and the Politics of Violence, 1850–1861" (PhD dissertation, Columbia University, 2010).