Searching out the Sacred in U.S. Political History 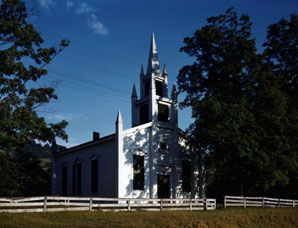 Seven years have passed since eminent historian Jon Butler urged his contemporaries to solve "the religion problem in modern American history." Published as a state-of-the-field piece in the Journal of American History, Butler's plea was for scholars to address the paucity of studies offering sustained exploration of religious power in 20th-century America. "Jack-in-the-box" was the colloquialism he used to describe this shortcoming. Historians of modern America, he noted, had a tendency to treat religion as a peripheral agent that pops up for a short time, makes some noise, surprises and scares some people, and then suddenly disappears again into a box where it waits for its next release. Whether addressed as a colorful "peculiarity" in the modern moment, or "idiosyncratic" impulse from a "distant American past," religion, Butler bemoaned, was something historians engaged as an egregious and uncommon element in 20th-century U.S. history, not the usual and commonplace.1

To be sure, Butler's "religion problem" hasn't been solved. As Paul Harvey and Kevin Schultz have asserted recently, religion now appears in "the larger narratives of modern American history," but it still doesn't "shape" them.2 But there is evidence that Butler's religion problem has at least been mitigated by new scholarship that treats faith as a substantive force in 20th-century society. If not yet mainstreamed in modern American history, religion is certainly less marginal than it once was. And if not yet the central player Butler (or Harvey and Schultz) wants it to be in the retelling of the nation's recent past, it no longer sits quietly in a dark space, waiting to surprise and shock people at its next sudden release.3

This is especially true in my own field of 20th-century U.S. political history. When Butler identified the lack of religion in 20th-century historical scholarship, he singled out politics as one potentially rich area of inquiry still in need of revitalization. In the years since his appraisal, several historians—junior and senior alike—have stepped forward to fill the gap. Aided by the cultural turn in political history, whose enlivening of the field in the 1990s paved the way for broader interpretations, they have produced first-rate studies that do exactly what Butler wants them to do: embed and empower religion in larger historical narratives, and make everyone take notice.

One reason for this is the rise in the study of conservatism. Ten years prior to Butler's lament, Michael Kazin and Alan Brinkley implored historians to solve "the problem of American conservatism" by making right-leaning ideas and individuals vital actors in 20th-century U.S. history. Historians responded. In the last 15 years we have seen a barrage of books about the New Right, creating a new subfield in the process. And religion has figured prominently in this new fashion; books by veterans like Donald Critchlow and newcomers like Daniel Williams are just two of the many fine texts that have placed Catholics and evangelical Protestants in the heart of a broader right-wing insurgency.4 By doing so they have eased the burden on two fronts—by innovatively connecting religion with politics on the one hand, and by mainstreaming the history of conservatism on the other.

Granted, conservatism was ripe for the kind of investigation a new political history requires, making such progress less striking perhaps, but there are at least four other areas in which searching for the sacred has created the same healthy buzz. Moving chronologically, we find the first of these in the study of protest politics during the 1930s. In the past few years, Charles Postel, Joe Creech, and Michael Kazin have revamped our understanding of late 19th-century Populism by parsing out its "plain-folk" religious motivations.5 Historians have applied this emphasis to the Depression era. Jarod Roll asserts in Spirit of Rebellion that Pentecostals in 1930s Missouri did not accept economic hardship passively, but drew on their "Holiness Doctrine" to legitimize labor-friendly radicalism and left-leaning reforms.6 Fundamentalist Baptists and Presbyterians elsewhere were just as politically animated, though their fierce, petit bourgeois theology of individualism espoused a different agenda. As Sarah Hammond and Matthew Sutton show, while fire-breathing Baptist preachers railed against Franklin D. Roosevelt as "the Antichrist," Presbyterian lay-leaders coalesced in interdenominational organizations designed to offset the liberalization of church and state. Regardless of their differing perspectives, church folk in the Great Depression clearly used politics to advance their prerogatives of faith, and Washington felt the effects.7

But religion was not just for the downtrodden or embattled; at mid-century it still dictated the dreams of the political elite too. Perhaps no other subset of political history has undergone a more profound shift lately than diplomatic history. Rendered too conventional by some in the 2000s, diplomatic history has emerged in the 2010s as a dynamic field revitalized by new interests in gender, NGOs, globalization, "soft power"…and religion. One exemplary byproduct of this renaissance is William Inboden's Religion and American Foreign Power, 1945–1960, which argues that Protestant notions of liberty and freedom informed U.S. officials' efforts to construct a "godly" front against "atheistic Communism." Once Dwight Eisenhower molded them into a more inclusive, civil religion of American exceptionalism, these notions also came to inspire Jews and Catholics around the world in a broad offensive against the Red Menace.8 Such was the spiritual essence of U.S. containment strategies, and as Inboden, Andrew Preston, Jason Stevens, Mark T. Edwards, and others emphasize, America's most powerful emissaries never took this essence lightly.9 In their minds, America's fight against foreign evils was God's fight against foreign evils, rendering any clean distinction between faith and international relations artificial.

If public theology was a wedge for American hegemony abroad, it could also be a subversive influence at home, something historians now stress when talking about the civil-rights era. As Joseph Kosek has shown in Acts of Conscience, even while many public intellectuals championed American imperialism, some spoke out against the prevailing orthodoxy.10 Reconciliation and brotherhood rather than conquest grounded their creed, fusing their interests with a broader crusade for human rights. These same principles enlivened the "prophetic" strand of Protestantism that bound the southern civil rights movement together. Rooted in an Old Testament tradition that roused black and white activists alike, this prophetic theology, David Chappell shows in A Stone of Hope, sacralized self-sacrifice for social justice and paved the way for nonviolent revolt throughout the South.11 Chappell's conclusions are now being enriched by studies of civil rights activism in the West. Scott Kurashige, Shana Bernstein, and Mark Brilliant have all shown that multiethnic religious agencies in 1940s California helped trigger the assault on American apartheid.12 Inspired by this state's rich but contested religious pluralism, they helped marshal local resources and resolve for a nationwide war against Jim Crow and all its intolerances, one they would win in the 1960s.

If sensitivity to region has opened up new understandings of religion and civil rights, it has also laid bare another dimension of 20th-century U.S. politics. Deemed the "Sunbelt" by some, historians have begun casting their gaze on the axis of political power that united a new South by the 1970s. Linked by a shared confidence in corporate capitalism and investment in postindustrial economic sectors (like technology and defense), states between North Carolina and Arizona constructed a bastion of fiscal conservatism and family values—and after the 1960s, the Republican Right. Bethany Moreton's recent book, To Serve God and Wal-Mart, makes it clear that this Sunbelt "neoliberal" order was no accident.13 In Arkansas, home to Wal-Mart, small-time entrepreneurs like Sam Walton tapped into deep-seated fears of big business and big government to construct a potent ideology of localism, family, free enterprise, and service. Fueled by a fiercely pietistic evangelicalism that champions Christ and capitalism, this ideology drove Wal-Mart into global prominence by 1980. As Darren Grem, Steven Miller, and others are now documenting, Wal-Mart's embrace of born-again religion is hardly unusual.14 Other illustrative dimensions of Sunbelt influence—sprawling mega-churches, techno-burbs, and fast-food chains—owe just as much of their verve to the resilience of this old-time gospel.

Thanks to their own verve and resilience, numerous historians have thus answered Butler's call by recasting religion as indispensable to our understanding of 20th-century U.S. political development. Even brief exposure to the few examples listed above reveals a trend with significance that transcends specialization. Indeed, what is so exciting about these superlative works is that they do not single out religion as much as they incorporate it in a much more extensive, vibrant, history. Rather than cordon off matters of faith, in other words, they crossfertilize them with other motivations for change, and by doing so they force historians of all stripe to reconsider master narratives: about the rise and fall of New Deal liberalism, for instance, and American interventions abroad, quests for racial justice at home, and the ascent of the Sunbelt in the postindustrial, postmodern world. Historians of labor, diplomacy, race relations, and political economy are taking notice. And if the array of panels at the most recent AHA Annual Meeting is any indication, historians in virtually every other field (from environmental and urban to immigration and legal history) are wrestling with the same reality. As if to underscore this point, the AHA program committee asked participants to "interrogate the nature of the sacred and its relationship to society, power structures, economic institutions, class, gender, and race." Has there been a more forceful response to Butler's quest for solving the "religion problem"?

Of course, critics might say that in casting such a wide net, the organizers also exposed the excesses of accenting religion: if religion is everywhere, is it really anywhere? My colleagues in Religious Studies sometimes complain that historians are careless in their search for the sacred, and that their crass methodology ("if it looks, smells, and sounds like religion, then it's religion") lacks precision, and they are right to do so. In the rush to make religion count, historians may be too willing to brush over difficult questions: about what exactly constitutes religion, for instance, and why pursuit of its essence is fraught with prejudice. But in this current phase of discovery, when religion's role in 20th-century society is still being excavated from layers of scholarly inattention, the problems of definition and bias seem like nice ones to have.

Darren Dochuk is associate professor of history at Purdue University and the author of From Bible Belt to Sunbelt: Plain-folk Religion, Grassroots Politics, and the Rise of Evangelical Conservatism (Norton).

3. See also Robert Townsend, "A New Found Religion? The Field Surges among AHA Members," Perspectives on History, 47:9 (December 2009), online at www.historians.org/perspectives/issues/2009/0912/0912new3.cfm. The article points to a significant surge in the number of AHA members professing an interest in the history of religion.

11. David L. Chappell, A Stone of Hope: Prophetic Religion and the Death of Jim Crow (University of North Carolina Press, 2004).

14. Darren Grem, "The Blessings of Business: Corporate America and Conservative Evangelicalism in the Sunbelt Age, 1945-2000" (Ph.D. diss., University of Georgia, 2010); Steven P. Miller, Billy Graham and the Rise of the Republican South (University of Pennsylvania Press, 2009).