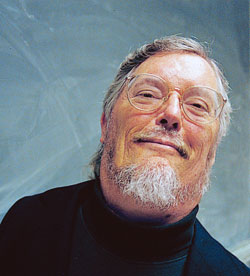 Paul Kenneth Longmore, professor of history and director of the Institute on Disability at San Francisco State University (SFSU), died suddenly at home on August 9, 2010. He was 64 years old. Longmore worked tirelessly on behalf of disability history as a field, and was a founder of the Disability History Association as well as the H-Disability listserv and the AHA Taskforce on Disability.

Paul Longmore was born in Mount Holly, New Jersey, in 1946, the son of a Baptist minister. At age seven, he survived polio, a disease that affected the shape of his spine and limited his hand movements. Although disabled students of his generation were frequently discouraged from pursuing higher education, Longmore attended Occidental College in Los Angeles for his undergraduate and master's degrees (1968 and 1971, respectively). He made use of both human and technological assistance, studying and writing with the help of a Dictaphone and a transcriptionist. In the mid-1980s, he held the position of administrator at the University of Southern California's Program in Disability and Society. His doctoral work in history at Claremont Graduate School culminated in a PhD in 1984, and a book based on his dissertation research, The Invention of George Washington (1988). The royalties from this book, and the resulting consequences of this income for his Social Security Insurance and other state supports, led Longmore to burn a copy of the book on a grill in front of the Los Angeles office of the Social Security Administration, in 1988. His successful protest led to a policy change for disabled authors and others who earn royalties, under the "Longmore Amendment."

Longmore taught briefly as a visiting professor at Stanford University; in 1992 he joined the history faculty at SFSU. He directed the SFSU Institute on Disability beginning in 1996. In 2000, Longmore and Rosemarie Garland Thomson co-directed the first NEH Summer Institute on Disability Studies. From conversations at this event, the H-Disability listserv was launched the following year, with Longmore as advisor. Paul Longmore and Lauri Umansky co-edited a collection of articles, The New Disability History: American Perspectives (2001), and went on to co-edit a book series for NYU Press on disability history. In 2008, he organized a conference on disability history at San Francisco State, and welcomed scholars from around the world to the event. When the Disability History Association was founded in 2004, Longmore was on the executive board, and remained active in that role until his passing.

His research on George Washington led to his being featured as an expert on PBS's American Experience documentary George Washington: The Man Who Wouldn't Be King (1992). In his work on telethons, activism, and film depictions, Longmore made important contributions on the cultural history of disability in America. He was the obvious choice to write the foreword to the three-volume Encyclopedia of American Disability History (Susan Burch, ed., 2009). Not long before he died, Longmore received a Mary Switzer Research Fellowship from the National Institute on Disability and Rehabilitation Research, to write a textbook on the history of the disability rights movement in America.

In his activism after the book burning, Longmore was a frequent and eloquent contributor to the debate on assisted suicide in California. When historians of disability submitted an amicus brief to the Supreme Court in the Garrett case in 2000 (pertaining to disability discrimination at the state level), Longmore was the one who invited the signatures of over 100 scholars.  In 2005 he was the first professor to receive the prestigious Henry B. Betts Award from the American Association of People with Disabilities. Shortly before he died, he was pleased about the news of an official "Ed Roberts Day" established in California, and spoke at Bay Area celebrations of the 20th anniversary of the Americans with Disabilities Act.

In October 2010, a public memorial service was held at SFSU. At the 2011 annual meeting of the AHA, there was an open forum on disability combined with a moving tribute to Longmore's work. Gifts to the Dr. Paul Longmore Memorial Fund at San Francisco State "will be used to honor, preserve, and advance his legacy and work in disability studies." He is survived by his sister, Ellen, and fondly remembered by many students and colleagues. Longmore's 2003 book Why I Burned My Book and Other Essays on Disability remains a fine and readable representation of his multiple interests and his unique voice.