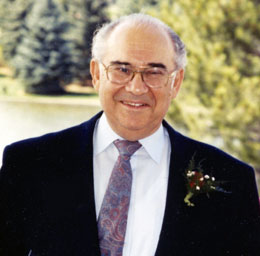 Harry Rosenberg was born on March 22, 1923, in Toledo, Ohio, the son of Jewish immigrants William and Rose Rosenberg. William Rosenberg, a resourceful and ambitious businessman, engaged in tailoring, plus general store and apartment house ownership. In 1928 he moved his family to Utah, eventually settling in Vernal, a predominately Mormon community where no Jews resided. Lacking formal education themselves, Rosenberg's parents regarded academic achievement as essential to their son's success in America. Accordingly, when fourth grader Harry earned a certificate for reading the most books and writing the best reviews of any student in the Unitah School District, his mother was truly proud. Little did she know that his life as a bibliophile and scholar had been launched.

In 1938 the family moved to Los Angeles. In high school there Rosenberg met Adeline Steinberg, a gifted singer and classical music devotee who took him to his first symphony concerts. Their shared love of good music contributed incalculably to their relationship. Also notable was Adeline's interest in the First Hebrew Presbyterian Church of Los Angeles—an evangelical Protestant congregation that caused them both to break from their traditional Jewish heritage. This conversion to Christianity would profoundly affect Rosenberg spiritually and professionally.

By this time the United States had entered World War II and Rosenberg, despite the loss of an eye in a childhood automobile accident, received a special waiver to enlist in the Army Air Corps (1942–46). This led to clerical service with 306th Bomb Group, which he joined in Thurleigh, England, on March 15, 1945. An important concomitant of military duty in Great Britain was exposure to local historic sites and culture. For example, a visit to York Minster, the largest Gothic cathedral in Northern Europe, aroused a compelling curiosity about ancient and medieval history. And this interest was reinforced by a trip to a Cambridge market, at which he bought an 1825 edition of Edward Gibbon's Decline and Fall of the Roman Empire for five pounds—a purchase Rosenberg described as "vital in terms of my future."

Following his discharge, Rosenberg married Adeline Steinberg in 1947 and used G.I. Bill support to study medieval history and literature at the University of California, Berkeley (BA, 1949; PhD, 1959). Before completing his dissertation, titled "The Western Attitude toward the Greeks during the Middle Ages," he also taught briefly at Stanford University and the University of Washington.

In 1959 he accepted a faculty position to teach at Colorado State University (CSU). His career there would span nearly half a century and feature some remarkable contributions to the school and the profession of history. From 1965–75 he served as the first chairman of a new Department of History, building it from a faculty of 12 to 21 members and making it a solid contributor to liberal arts education at CSU. Voluntarily stepping down as chairman in 1975, he noted with satisfaction that all of his faculty hires had achieved tenured status.

In 1976, soon after his return to full-time teaching, Rosenberg earned CSU's prestigious Honors Prof Award. The ceremony included a public lecture that conveyed his commitment to history's importance and revealed some of his most deeply held values. He began with an elegant survey of western European and American historiography and various approaches to understanding the past. He considered the dismaying "alternation of social tragedies and intellectual achievements." He concluded by saying, "although there has been a knowledge explosion, it has not been accompanied by a 'wisdom explosion.'" Genuine answers would always prove elusive. Rosenberg addressed these ideas repeatedly in his historiography seminar—a required class for all history graduate degree candidates at CSU. Hundreds of students thus benefited from his enormous knowledge and passion for history.

In 1962 he began more than four decades of service to the Faculty Council that included two terms as chairman. He viewed with some pride his efforts to make this body genuinely representative of faculty concerns and helped to implement structural changes that advanced this goal. Moreover, good historian that he was, he wrote a history of the Faculty Council that remains the standard reference to this day.

Concurrently, Rosenberg worked diligently to advance his academic specialty, medieval studies. In 1968 he helped to found the Rocky Mountain Medieval and Renaissance Association, continuously holding major leadership and editorial positions. "No member of the Association," noted colleague Charles Smith, "rendered greater service to the RMMRA over a longer period than Harry Rosenberg."

Harry Rosenberg was a serious scholar. For example, he produced 93 entries for the Encyclopedia of Early Christianity and, as Charles Smith observed, "more than 90 gracious and learned reviews of scholarly books on late antiquity and the early middle ages." Even after retirement in 2004, he continued to be sought out as a reviewer in this field.

Above all, he was a remarkable mentor to countless students, as well as junior colleagues whom he diligently helped to advance professionally. Scores of former pupils, such as impresario Shelton Stanfill and University of Chicago professor Jean Bethke Elshtain, acknowledge Rosenberg's enduring influence in their lives.

Surpassing formal accolades, however, were personal relationships that Harry forged. Few people sustained such lasting friendships. Students, colleagues, and countless others welcomed his company and appreciated his singular qualities. Harry Rosenberg, who died on September 9, 2010, will always be missed by those who knew him.