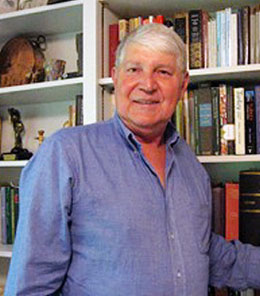 Donald Quataert (1941–2011), Distinguished Professor, State University of New York, and internationally known scholar of Ottoman labor and social history, died February 10, 2011. Quataert left an indelible impact on the field through his innovative scholarship writing history from below and tireless mentoring of graduate students and younger scholars in the field. After earning his BA in history at Boston University in 1966, he received the MA in Middle Eastern Studies at Harvard University in 1968, and the PhD in history from UCLA in 1973. He taught at the University of Houston from 1974 to 1986 and, after a year on an NEH fellowship, joined the faculty at Binghamton University in 1987. As a testament to his prominence, Quataert received numerous prestigious scholarships and fellowships including two NEH awards, grants from the Social Science Research Council and a John Simon Guggenheim Memorial Foundation fellowship.

Quataert was one of the world's most prominent and influential historians of the late Ottoman empire, pioneering the study of labor and social history through his many studies of the lives and worlds of workers, peasants, and artisans in their full social, gender, and ethnic complexities. When much of the scholarship centered on leaders and state elites, he focused on ordinary people, those who typically are left out of the historical narrative. This work was made possible by his broad archival and primary source research over the decades, which moved beyond and against the grain of state documents, and also rested on primary sources he discovered outside of the imperial Ottoman archives. A prolific writer, Quataert authored eight monographs and nine edited and co-edited books, and published nearly 60 scholarly articles. Most noteworthy were Social Disintegration and Popular Resistance in the Ottoman Empire, 1800–1908: Reactions to European Economic Penetration (1983); Ottoman Manufacturing in the Age of the Industrial Revolution (1993); with Halil Inalcik, An Economic and Social History of the Ottoman Empire, 1300–1914 (Cambridge series, 1994); and, most recently, Miners and the State in the Ottoman Empire: The Zonguldak Coalfield, 1822–1920 (2006). He also wrote The Ottoman Empire, 1700–1922 (2000), now in its second edition, a highly regarded and widely used textbook on Ottoman history that introduces countless students and general readers to the Ottoman past. This text has been translated into Turkish, Greek, Portuguese, Korean, Arabic, and Italian. He also helped pioneer consumption studies in Ottoman history and numerous scholarly conferences in the United States and abroad were organized around findings and arguments from his many publications. Because of his international reputation, Donald Quataert was often on radio (notably NPR), interviewed as part of a one-hour documentary produced by Lucasfilm on The Ottoman Empire: A World of Difference (2007), and appeared in the History Channel's segment on the longevity of the Ottoman Empire. A strong advocate for social and global justice, he gave many public lectures in his community on important contemporary issues in Middle Eastern society and politics. Reflecting his passion for making visible the lives of the marginalized, with John Chalcraft, London School of Economics and Political Science, he launched an ongoing web-based archive of rare, scattered, and difficult to obtain primary sources on history from below, encouraging scholars to use the images and, in turn, contribute their materials to the archive. It is found at http://harvey.binghamton.edu/~ottmiddl.

Quataert served the university and wider academic community extremely well, giving generously of his time to the historical profession. He was chair of the history department at Binghamton University from 2000–03 and, earlier, chair of the Faculty Senate from 1996–97, among his other service at the university. He was member and chair of the Institute for Turkish Studies between 1999 and 2006, when he resigned in an academic freedom dispute about the integrity and independence of scholarly inquiry. He also served as member of the Board of Directors of the Turkish Studies Association intermittently from 1974 on and became the association's president from 1986 to 1988. From 1989 on, he was series editor of The Social and Economic History of the Middle East for SUNY Press and guest editor of the fall 2001 issue of International Labor and Working-Class History. In 2008, he joined the editorial board of the journal. Over the years, he also was on the review panels for many U.S.-based foundations offering fellowships and stipends for travel and research in Ottoman and Turkish history. In 1995, he helped establish the successful dual degree program between Binghamton University and Turkish universities that promotes an exchange of undergraduate students in their sophomore and senior years. Moreover, he transformed the history department at Binghamton University into one of the most successful and competitive institutions for graduate studies in the later Ottoman era. Donald Quataert was an inspiring teacher of undergraduate students, making them think, shaking up their conventions, and challenging their assumptions. His undergraduate courses on the Middle East and the Ottoman Empire were very popular. He was without peer as mentor to PhD students, helping them develop research and linguistic skills, critiquing and encouraging their work, and inspiring them with his passion for history. Many of his PhD students currently teach in Turkey, where they carry on his legacy in their own emerging careers. Donald Quataert was a creative and indefatigable scholar, a great teacher and mentor, and generous colleague, whose impact survives in his scholarship, his students, and his example.